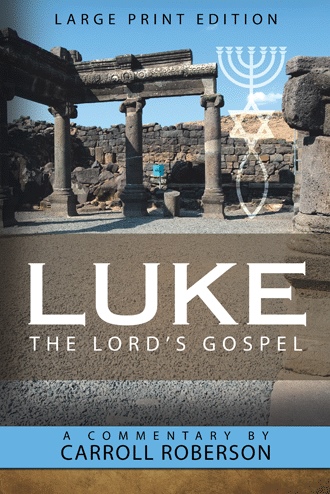 Luke 24:13- And, behold, two of them went that same day to a village called Emmaus, which was from Jerusalem about threescore furlongs.

Luke 24:14-16- And they talked together of all these things which had happened. And it came to pass, that, while they communed together and reasoned, Jesus himself drew near, and went with them. But their eyes were holden that they should not know him.

They were no doubt talking about the empty tomb and the body of Jesus missing. While they were walking, a stranger drew near and starting walking with them. But they did not recognize who he was. Why? Was it because their hearts were hardened and they had little faith? No. Notice the scriptures say that their eyes were holden. In a supernatural way somehow Jesus kept them from recognizing who He was.

The reason why Jesus started walking with these two men was that he knew that they were sad. He wanted to give them His joy. Now He says to these two sad disciples, “What things happened?” The Lord wanted to hear it from them, just like he wants to hear it from us.

Luke 24:19b-24- And they said unto him, Concerning Jesus of Nazareth, which was a prophet mighty in deed and word before God and all the people: And how the chief priests and our rulers delivered him to be condemned to death, and have crucified him. But we trusted that it had been he which should have redeemed Israel: and beside all this, to day is the third day since these things were done. Yea, and certain women also of our company made us astonished, which were early at the sepulchre; And when they found not his body, they came, saying, that they had also seen a vision of angels, which said that he was alive. And certain of them which were with us went to the sepulchre, and found it even so as the women had said: but him they saw not.

They began to tell the stranger what had happened, and they said that Jesus of Nazareth was mighty in deed and word.

Luke 24:25-27- Then he said unto them, O fools, and slow of heart to believe all that the prophets have spoken: Ought not Christ to have suffered these things, and to enter into his glory? And beginning at Moses and all the prophets, he expounded unto them in all the scriptures the things concerning himself.

This is one of the most powerful passages of scripture, and it was only given to two men. This stranger did not say, “Look, it’s me!” I am alive!” Rather, He takes them to the sacred scriptures and begins with the books of Moses and then the prophets. * This overview of who the Messiah really was and what His real mission was no doubt included His birth in Bethlehem, His ministry in the Galilee, His death, burial, and resurrection in Jerusalem. This stranger told them what they did not understand; that the Messiah had to suffer first. Unknowing to these disciples, this stranger was talking about himself. What exact scriptures the stranger used we do not know, but it was the greatest sermon that was ever given on planet earth.

* The pattern that was used in Jesus’ time for teaching the scriptures was: the Torah (most inspired), the prophets (next inspired), and the historical books (least inspired). But all of the Hebrew scriptures were considered sacred and inspired. It’s very interesting that Jesus used this same pattern when explaining to these men the first and second coming of Israel’s Messiah.

Luke 24:28-And they drew nigh unto the village, whither they went: and he made as though he would have gone further.

Luke 24:29- But they constrained him, saying, Abide with us: for it is toward evening, and the day is far spent. And he went in to tarry with them.

This was the desire of our Lord. He wanted them to ask Him to come in, just as He wanted the disciples to call out to Him during the raging storm on the Galilee. Our Lord desires to have fellowship with His children. There are times in all of our lives when it seems that the Lord has removed Himself from us, but in reality He desires for us to call out to Him.

The very same pattern we find in Luke 22:19, at the Last Supper:

Luke 24:31-32-And their eyes were opened, and they knew him; and he vanished out of their sight. And they said one to another, Did not our heart burn within us, while he talked with us by the way, and while he opened to us the scriptures?

Notice that their hearts burned within them while our Lord explained the scriptures! The evidence of the empty tomb was not enough for them. They had to experience the risen Messiah for themselves.

Luke 24:33-35-And they rose up the same hour, and returned to Jerusalem, and found the eleven gathered together, and them that were with them, Saying, The Lord is risen indeed, and hath appeared to Simon. And they told what things were done in the way, and how he was known of them in breaking of bread.

Luke the Lord’s Gospel is a deeper look into the life and times of Jesus, our Lord. For centuries, scholars have only studied Luke from the Greek perspective and have failed to see the Hebrew Lord behind the Greek text. Was Luke a Gentile like most scholars teach? Or was he a Greek-speaking Jew living in the diaspora?

Evangelist Carroll Roberson has done extensive studies concerning the original meaning of the words of Jesus within His Jewish context. With over thirty trips to Israel, he dives deeper into the first century customs and traditions that Jesus would have encountered. Since 1985, Carroll has achieved national and international success with his music, with over forty gospel albums recorded, and has written over three hundred songs. But his first love is for preaching the Bible and helping the church to understand the biblical Jesus.