The Crimson Path of Honor 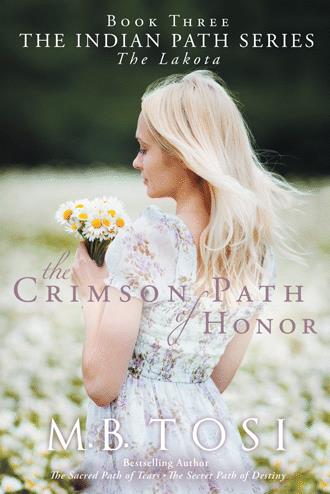 Courage is resistance to fear, mastery of fear, not absence of fear. Mark Twain Introduction “No, no . . .,” Luci mumbled as her head swayed with the lurching motion of the stagecoach. Jolting her awake from a deep sleep, a strong hand frantically grabbed her arm. For a moment, the young woman was disoriented, and then she realized it was Slick, the Oklahoma cowboy. His spurs scraped the narrow planked floor. “Get down, ma’am. Quick! We’re being attacked by Indians.” In shock, Luci obediently scrambled onto the stagecoach floor next to Martha Thompson, who was sobbing hysterically. Protectively, Luci put her arm around the ample woman’s trembling shoulders. “Everything will be all right,” she said reassuringly, but she didn’t believe a word of it. Fear raced like a runaway train through her chest. Captain Packard, a former Union soldier turned bounty hunter, was poised for action with his Winchester rifle protruding out the rickety window frame. There was glee on his weathered face as he relished killing the “blood thirsty varmints.” The wind whipped back his silver mane of hair like the vortex of a tornado, and a demoniacal glint filled his wild eyes. The captain tossed a spare pistol to Jasper Thompson, who anxiously leaned out the opposite window. Never expecting an ambush on his journey to the rich farmland out west, the shy, gaunt homesteader was stunned into silence. Suddenly, Slick, who was propped against a rear window, twisted Luci’s arm and forced her to let go of the homesteader’s wife. Then he straddled her protectively under his lanky body, anchoring himself half on the tiny blond woman and half on the crackled leather bench seat. His chaps flapped noisily in the turbulent wind. With six-shooters drawn, the cowboy began to volley with the whooping raiding party. It was a thundering of jarring, strident sounds. Earsplitting gunshots echoed hollowly, and the tiny wooden enclosure strained and groaned as it tore faster and faster over the brutal terrain. Shrill war whoops pierced the air, and rumbling hoof beats pounded closer. Magnifying her terror, Luci’s heartbeat drummed in unison. All at once, she heard a muted groan and then a scream. Her horrified eyes spotted the limp body of their guard, Harlan Wright, flailing through the air off the top of the stagecoach to his death on the rocky trail. He had been riddled with at least four feather-tipped arrows. Next, Jasper Thompson cried out in anguish. Luci’s eyes flew to his slumping body, an arrow bisecting his chest. Martha, ignoring the danger, rushed to her new husband’s side, and suddenly an arrow found a bull’s-eye in her back. Shock, then peace, filled their stricken eyes, and they died, sinking motionlessly into each other’s arms on the blood-spattered floor. The driver, Jeb Smith, met a grizzly death next as his cadaver dangled upside down from the roof, then dropped with a sickening thud to the hard ground. Because it was entering a treacherous curve in the trail, the rattling stagecoach careened wildly out of control without a driver. In numbing fear, Luci tried to pray, but the words got stuck in her paralyzed throat. She squeezed more tightly into a corner for protection, but the dead bodies of the Thompsons pinned her legs against the splintered floor. Slick’s oppressive weight also made it impossible to move any further. As he tried to gun down a few more “savages,” the captain’s outrageous laugh rang out deliriously. A deadly arrow came out of nowhere to nail him between the eyes, and he toppled forcefully onto the corpses of the Thompsons. In shock that he’d survived the Civil War but not an Indian attack, his frantic eyes sought Luci and appealed for help, but it was too late. Blood covered everything, splattering Luci’s plain gingham dress and the cowboy’s dusty cowhide boots with a melancholic crimson ooze. Though nauseated at the carnage, Luci forced herself to face reality and peer around Slick’s gangly form. She gasped at the ferocity on the bronzed, war painted faces of the Indians as their lathered horses pounded by the stagecoach. “Oh no,” Luci screamed silently against the deafening wind. Slick took a well-aimed arrow in his chest and careened from the rear window. He crushed her with his weight. Wanting him to know she had appreciated his protection, she scrambled from beneath with difficulty and gently touched the cowboy’s lined face. His pained eyes flung wide open. “Ma’am, you’re such a pretty little thing. I always said so . . .,” he whispered feebly. All eternity was in his voice as death claimed another victim. Only Luci remained. She’d never thought a slaughter like this was possible on her journey to teach in the Oregon territory. Sensing victory, the Indians wildly circled the stagecoach, and one leaped to the rooftop to halt the stampeding team of horses. He landed with a frightening thud, which jolted Luci into action. Because of her small size, she was sure they hadn’t spotted her. With a burst of energy, her survival instinct kicked in. Grabbing the captain’s rifle out of his lifeless hands, she hastily crawled across the dead bodies to the rear seat, lifting the bench top to reveal a tiny storage compartment. Deftly, the young woman maneuvered into the suffocating space, and she propped open a half-inch crack for air. Skidding across the rocky trail, the stagecoach rumbled to a deafening stop. The ominous silence of death was broken only by the pounding of Luci’s heartbeat in her throat.

In The Crimson Path of Honor, the Civil War is over, and a violent period known as the Indian Wars is erupting. Ignoring the danger, a feisty young woman from Boston rebels against her tyrannical father’s plans to marry her off to a family friend, and she seizes an opportunity to go west to teach.  On the way to the Oregon Territory, her stagecoach is attacked, and she is captured by a marauding band of Lakota (Sioux) Indians who call the Rocky Mountains home.

Accepting her perilous situation, the young woman courageously confronts the daily hardships inherent in early Native American life. At first treated like an outcast, she eventually adapts to her circumstances and comes to respect the camaraderie of the Indians, even falling in love with her captor. Over time, she begins to challenge her abductor’s traditional views on bloodletting and violence as the path of honor. Torn by her inability to justify her growing feelings for her captor in a culture of violence, she continually wonders why God has abandoned her in such a desolate place.

“M.B. Tosi has done it again. This is the historical novel at its best—realistic, filled with tough issues against a background of conflict and unrest.”

M.B. TOSI is a bestselling author of The Indian Path Series. She has also been an editor of non-fiction books and a weekly newspaper. She teaches piano and has a bachelor’s degree in journalism and a master’s degree in education. Born in Pierre, South Dakota, she has lived in Alexandria, Virginia; Bucks County, Pennsylvania; and Toledo, Ohio. She has three children and four grandchildren.

Read more about The Indian Path Series at
www.MBTosi.com