THE SACRED PATH OF TEARS 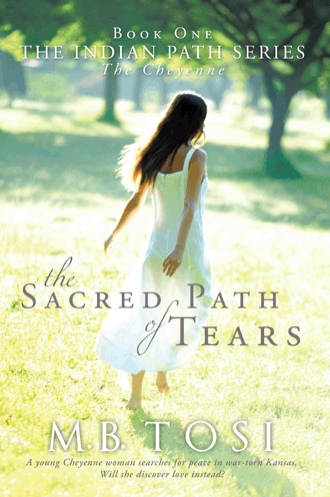 My name is Mokee'eso, which means Little Woman in the language of the Cheyenne Indians. I was given my name by my aunt, Anovaoo'o, which means Falcon Woman. I think my parents hoped I would someday have the strength and grace of a falcon, so they gave the honor to my aunt to name me, hoping her attributes would rub off on me. The problem was that I was as scrawny and shriveled as a prairie chicken when I was born, and I barely survived. I’ve often thought how awful it would have been if my aunt had actually named me Prairie Chicken or even Chicken Legs. I get teased enough for my abbreviated size, so that would have made life even more difficult. It also doesn’t help that instead of the beautiful, coppery bronzed skin of my people, I got the light tan skin of a desert lizard. I must have had an ancestor way back that was white, because here I am, not red or white, just kind of a dreary, splotchy sand color. My other less than desirable attribute is my hair, or lack of it. Although my hair is black like my people, it has the texture of a brittle heap of tumbleweed. I keep cutting it shorter and shorter with my hunting knife because it sticks out like angry, unruly pokes of buffalo twine in what used to be my braids. Pretty soon, my hair will be so short that it will resemble a mound of stiff, black vegetation atop my tiny, tan head, which actually, if the truth is known, looks like the shape of a small prairie turnip. Needless to say, I’m not a beauty, and I’ve often wondered what the Great Spirit had in mind when He created me so unlike the others. In a way, it’s good to be so unusual, a word I definitely prefer to a less complimentary one like mousey or homely. I never have to take the time to try to be pretty like the other maidens, which for me I know is an impossible feat. Instead of trying to make myself marriageable (which seems as distant as the white man’s ocean I once heard about), I focus on having a good sense of humor about my obvious physical flaws and living a life filled with sometimes strange, unconventional behavior. After all, it’s best to be what I am, and there must be a reason I’m so different, although I haven’t been able to figure it out. So, I’ve decided I like my name even though it reminds my Cheyenne people how small I am. I also like myself most of the time. I have many friends as no one is ever intimidated by me. Be serious now. Would you feel threatened by a skinny chicken with a prairie turnip for a head and vegetation growing in a mound on top of it? My friends all call me Mokee for short, no pun intended, and this is my story.

The Sacred Path of Tears is a journal written by a young Cheyenne Indian woman, nicknamed Mokee, during the Indian Wars in Kansas in the late 1860s. After Mokee and her companion observe the Sand Creek Massacre, they warn the other Indian camps along the Smoky Hill River. They take cover in a barn near Salina, Kansas, where they are discovered by a widow and her two sons. Mokee’s companion leaves to join the fight against the white soldiers but hating war, Mokee, with her lighter coloring, gains a safe haven with the widow’s family. She finds a mentor in the well-educated widow and embraces the opportunity to read and write English. As her life unfolds, Mokee is torn between two worlds at war and the two men she loves, one a white settler and the other her companion, who has become a Cheyenne Dog Soldier. Though war is her constant shadow, Mokee tries to find the purpose for her life and a path of peace in her war-torn world.

“M.B. Tosi mixes history and fiction with believable characters and the result is a fascinating, enjoyable, and inspiring story.”
- Jim Langford,
author of The Spirit of Notre Dame

M.B. TOSI has been an editor of non-fiction books and a weekly newspaper. She teaches piano and has a bachelor’s degree in journalism and master’s degree in education. Born in Pierre, South Dakota, she has lived in Alexandria, Virginia; Bucks County, Pennsylvania; and Toledo, Ohio. She has three children and three grandchildren.