THE SECRET PATH OF DESTINY 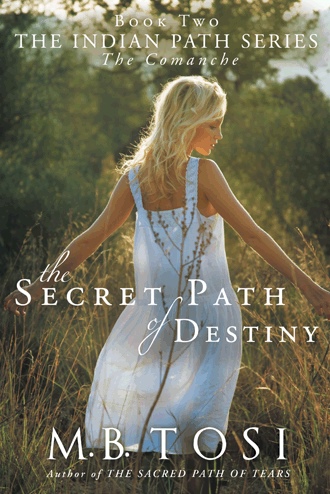 My mother loves fine literature and opera. Although we’re poor, her goal has always been to make sure I have been exposed to both. I can’t tell you the number of times we sneaked into the back of the Astor Opera House in New York City to hear the latest opera from Europe. Although I always tagged along on her adventures, I agree with what Rossini, the Italian composer, once said about opera, “One can't judge Wagner's opera Lohengrin after a first hearing, and I certainly don't intend to hear it a second time.” I think I’m an even harsher critic. There are some operas I don’t even want to hear for the first time.

I keep asking myself, am I being unfair, even immature about opera, and why is opera such a thorn in my life? I’ll try to explain, although I admit it’s complex. First things first, my name is Isolde Margarethe Bachmann, and yes, it’s true, I’m named for the infamous Isolde, the scandalous adulteress of medieval and renaissance literature. Although she was betrothed to another, she took a love potion and entranced her lover, Tristan. Her age was never mentioned, but I’ve always assumed she was sixteen like me. She was obviously more precocious than me, however, to be involved in a love triangle at such a tender age.

I’ve often wondered what my mother was thinking when she named me Isolde. Did she think no one would ever discover the origins of my name or associate me with the shameful adulteress? Worse yet, many cultures believe people’s names foreshadow who they will become and what attributes they will possess. If that’s true, I could be in deep trouble.

When I was younger, I admit I thought the name Isolde (which is pronounced ih-SOAL-duh) was pretty, and it flowed like a ribbon of water in a sunlit waterfall. I also agree it’s been fun to have a unique name that’s different from my other classmates. I’ve also been lucky because most of my friends weren’t particularly interested in reading books from the Middle Ages. So, I never worried about my notoriety in the world of literature.

Then the impossible fluke happened. My mother’s favorite composer, Richard Wagner in Germany, suddenly decided to put the whole ghastly love triangle to music in an opera called Tristan and Isolde, which recently made its debut in Munich in 1865. Suddenly, the anonymity of my name is gone.

To all my new schoolmates, I’m mockingly referred to as a star crossed, adulterous lover who sings my death aria out of a body bag. Actually, it’s my lover Tristan who dies first and who sings out of his body bag. Whoever is in the bag, it’s not the cat any longer because, in a cruel twist of fate, the illicit escapades of my namesake a thousand years ago have jumped front and center onto the streets of my new hometown in Texas.

I know it sounds farfetched a famous German composer and his new opera can wreak havoc on my life clear across the Atlantic Ocean in the middle of Comanche Indian country. But the fact is Wagner, the beloved German composer and conductor, is a cult hero to many residents of my town and reminds them of their German heritage.

My new home is an unusual place called Fredericksburg, or Friedrichsburg as it’s known in German. It’s a wholly German settlement in the heart of Texas, a community which unabashedly loves Wagner. Some of the older residents actually call the town Fritztown. It was named for Prince Frederick of Prussia when it was founded in 1846, and many of the residents still speak a dialect called Texas German. Wagner’s new opera has recently become the hot topic of conversation in Fredericksburg and unwillingly, so have I, one of its newest residents.

My mother and I recently moved to Fredericksburg from New York City in May of 1865, when I was still fifteen. It was a dangerous time to travel across the country. Confederate General Robert E. Lee had just surrendered at Appomattox, and emotions were still running high, although the Civil War was technically over. Twice our train was stopped by the United States Army, and the soldiers scoured the passenger cars for suspected insurrectionists.

As we got further west into Indian country, we began to be apprehensive about the repercussions of the Sand Creek Massacre, rather than the leftover anger from the Civil War. The massacre, which had resulted in the killing of more than a hundred Cheyenne, mainly women and children, had occurred in the Colorado territory on November 29, 1864. It was rumored an alliance of Indian tribes would seek revenge on white settlers throughout the Plains states, especially the area along the Smoky Hill and Republican Rivers in Kansas, which was the traditional Indian hunting grounds for buffalo.

On November 25, 1864, a few days before the massacre at Sand Creek, Hutchinson County, Texas, saw one of the largest Indian battles ever to take place. The clash happened between the United States Army and five thousand Native Americans, including the Kiowa, Comanche, and Apache tribes. It was named the Battle of Adobe Walls for an abandoned adobe trading post in the area. Although the army declared a victory, Colonel Kit Carson and his troops, which were outnumbered ten to one, were forced to flee the battlefield.

So it was with trepidation we journeyed into the unknown, first by train and then by stagecoach to central Texas. We worried all the while about disgruntled Confederates and vengeful Indians, and even about the mysterious older German man who had hired my mother to be his housekeeper, and who was allowing us to live in his house in Fredericksburg, Texas.

In The Secret Path of Destiny, a young, disabled, German-American girl, named Isolde, and her destitute mother reach out for a lifeline being offered by a widower in the German town of Fredericksburg, Texas. The year is 1865, and the two travel from New York City through the aftermath of the Civil War. But another war is brewing, this time with Native Americans. And Isolde and her mother are heading right into the heart of Comancheria, the homeland of the Comanche.

It is not the Comanche Isolde fears, but her mother’s new employer, who becomes her stepfather. Isolde realizes he is a cunning man who is not who he pretends to be. As the situation worsens, Isolde is forced to make a life-changing decision to escape; desperate, she seeks refuge with a Comanche Indian, who befriends her at first, but later joins a warring band of Comanche. Her malevolent stepfather pursues her across Texas, turning her life upside down. In the midst of her troubles, Isolde’s faith sustains her, and she unexpectedly finds the love that has always eluded her. Eventually, Isolde accepts the difficult circumstances of her life and realizes that a person’s destiny is often hidden from view because the path is sometimes rocky.

“Just about anyone can write a book, but only a good writer can write a good book. M. B. Tosi is a very good writer, and her books are truly worth reading.”
—Jim Langford, author of The Spirit of Notre Dame and Quotable Notre Dame

M.B. Tosi has been an editor of nonfiction books and a weekly newspaper. She teaches piano and has a bachelor’s degree in journalism and a master’s degree in education. Born in Pierre, South Dakota, she has lived in Alexandria, Virginia; Bucks County, Pennsylvania; and Toledo, Ohio. She has three children and three grandchildren.


Read more about The Indian Path Series at www.MBTosi.com