Volume One Ladies of Gold

The Remarkable Ministry of the Golden Candlestick 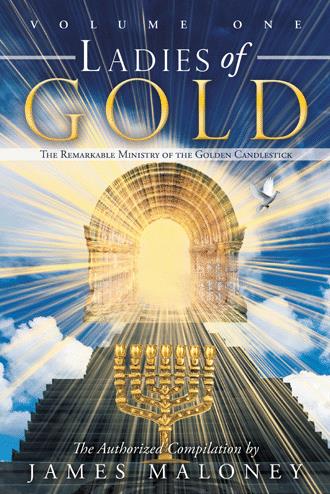 As I lay upon the couch, all strength again left me. A most delightful and wonderful heavenly atmosphere filled the room. My outward senses were held in suspension, and I was filled with an interior joy and light impossible to describe.

Then, suddenly, He appeared — the King in all His beauty! He swept in and seemed to fill the entire room! So ravishing was this sight, and so clear, that I felt I would swoon with delight! He appeared as described by the Shulamite in The Song of Solomon — and He was dressed in kingly robes! So majestic was His beauty, thus crowned and robed, that my heart melted into a new fervor of love.

I saw His golden sandals, white undergarment, the royal purple tunic of a velvety substance, with jewels inset; and finally, to my surprise — as He turned — His cape or train, of finest ermine. It was very long, reaching from one end of the room to the other.

The vision lasted about ten minutes, gradually fading from my sight. I turned and faintly heard the sister praying for America and the soldiers. I realized that they had not seen the Lord. It was so real to me that I was astonished! The sister seemed drawn to me, but I felt that I must not be touched. I seemed to be out of my body.

She approached to pray for me; but, instead, suddenly cried out, “Knock and it shall be opened unto you,” repeating it again and again. Then, in demonstration, she knocked and said that she saw a large golden door which opened to her. She burst forth in joyful praise and was radiant in the Spirit. She cried out, “Oh, I see the King, the King in His beauty.” She described and praised Him. The description was identical, even to the ermine train!

We both rejoiced for some time. Another sister, while praying for me at the same hour, also saw the door opened. “She hath prevailed,” the Spirit said, “and from henceforth the door into the heavenlies is open to her and to the company who are to enter in with her.” He also gave her the verse in Revelation 3:8, which He had given to me.

I retired in great joy. Henceforth this house was to be to me “The King’s House.” Had He not appeared to my joy? Had He not shown me His beauty? Was I not ravished anew with love, and lifted by Him out of death into new life? Yes, I knew that I was in His House, and in a bridal chamber, as it were, being prepared for holy union. A new day had dawned for me; yet little did I dream of all the glories and blessings and revelations which He would give me during the following weeks. How unworthy I feel now as I consider these divine favors, but I recall that they are all for the Bride, of which I was just a representative member, being shown in advance wonderful things to come.

Ladies of Gold: The Remarkable Ministry of the Golden Candlestick begins a three-volume compilation of the visionary teachings of Frances Metcalfe and the members of the Golden Candlestick, a Christian fellowship of individuals who lived in a California mountain community a little more than seven decades ago. They focused their spiritual lives on worshiping God and in making intercessory prayers for the nations. Touched by the vitality of the visions experienced by these remarkable ladies, James Maloney has undertaken the work to prepare this collection of their direct experiences of the presence of God and His messages for the world.

In an extended introductory essay, “Who Were the Golden Candlestick?,” James Maloney answers that title’s question and places the group’s ministry in context. The main body of Ladies of Gold presents eleven visions Frances Metcalfe described as records of her times of rapture.

If you share the concern of the Golden Candlestick and James Maloney for experiencing true worship of the Lord and for praying for the wellbeing of the nations or if you have an interest in exploring the history of religious experience in twentieth-century American culture, then Ladies of Gold: The Remarkable Ministry of the Golden Candlestick will give you substantial food for thought and inspiration for reflection.