My Autobiography and Works in ECRH, FEL, and WIRELESS COMMUNICATION 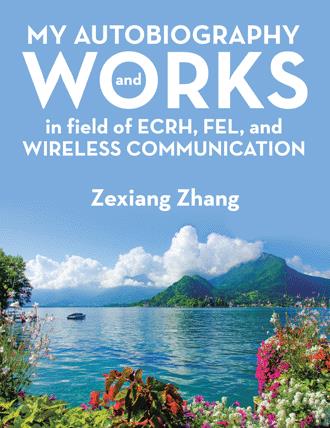 In front of the book is the “PREFACE”, where the author introduced briefly his family, his carrier, and his living and working experience and achievements.

The author's father had been severely denounced and being getting rid of freedom for up to 10 years in the Great Cultural Revolution Movement, and his mother died mainly due to this movement. The author lived in very hard living conditions before Dan Xiaoping was in power: when he established his own family he could not find a residence and had to build a small shack himself and his daughter was almost drowned due to the poor living conditions.

The author worked in the Institute of Physics, Academia Sciences of China from 1964-1988. He was one of the major investigators of China's first TOKAMAK type fusion experimental facility CT-6, which was awarded a first scientific achievement prize by the First Science Convention of China held in 1974.

The author worked in Germany from 1981-1983 as an Alexander Humboldt scholarship recipient. He dedicated to ECRH (electron cyclotron resonance heating of plasma) research both in theoretical and engineering aspects of ECRH and published several papers in international fusion conferences and was noticed and recognized as a specialist in the field of ECRH.

He came to US in 1988. His Ph.D. work at University of Maryland at College Park was to implement laser radiation by using a planar wiggler and high energy sheet electron beam. He implemented this kind of free electron laser in the mm wavelength range the first time in the world and published several papers.

After obtained his Ph.D. in Electrical Engineering at UMCP the author worked in several US companies as senior RF design engineer, including Lucent Technologies and HP.

The routine work of the author at Lucent Technologies was as RF design engineer for a WCDMA base station project. Besides, the author offered and completed some other tasks and among them the most important ones probably are: 1. Investigated the COFDM (Coded Orthogonal Frequency Division Multiplexer) system fully and suggested using this system as next generation base station format. 2. Analyzed and Proposed to use CWDM (Coarse Wavelength Division Multiplexer) optical fiber network as the link network for modular base station systems, and outlined the design of a LD (laser diode) and a multiplexer which are key elements for the proposed CWDM net work.

The major job of the author at HP was testing every new version of notebook computers, especially, to resolve noise interference problems between installed wireless communication transceiver modules and notebook mother board. The author made unique contributions.

Then three papers written by the author before but not published are inserted in this book, including a wide band and small size antenna for radar applications , an analysis of notebook noise, and an analysis of a CWDM fiber optical network including LD design outline.

This book tells people how Chinese intellectuals were living before Den Xiaoping was in power and it is also interesting in science and technology field.

The author lived in China from 1941-1988 and has been living in US form 1988 till now. In China his father was designated as a landlord by mistake, and therefore, his parents suffered a lot and the author was also treated unfair in many aspects. Even struggling in adversity the author finally became a scientist in China in the field of plasma physics and made great contributions to China's nuclear fusion research.

After the author came to the US he obtained his Ph.D. degree in electrical engineering from University of Maryland in College Park with achievements in research of free electron laser. Then he worked in several US companies including Lucent Technologies and HP. In both companies he was mainly dedicated to wireless communication projects. Except routine jobs he also did a lot of technical research on wireless communication for next generation. Those works are introduced in “List of Publications, Research Reports, and Patents”, which is included in this book as the second part of the book.