Book One of the Romalo Legacy Series 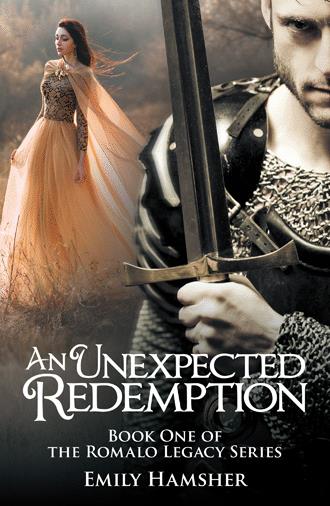 “Are we lost Lord Balan?”
“No, of course we are not lost. I am simply remembering.”
Her voice had gone to just above a whisper, uttering words he could not make out.
“What do you say?”
“I was asking the Lord to guide us, and give us protection.”
“I need no guidance. I have been there before.”
About to elaborate to the back of her head that reached no higher than his chin, he was interrupted when she pointed outward. “Is that what you were looking for?”
Not but fifty paces in front of them stood the outbuilding.
“The very one.” He muttered, hating that she had found it first.
“Thank you, Iisus (italicized).” She whispered, her voice exuding confidence as if the mystical son of God had really offered them assistance in finding the lean-to.
Quickly leading the great animal behind the back of the edifice, he dismounted, tethering the horse to a wooden post. Turning to assist his captive, he found himself paralyzed by the morning sun that caught her auburn hair and cast a radiant glow about her feminine features. Like a creature from another world she sat high upon a throne of elegance. Snatching her off the pedestal of her angelic charm, he set her down beside him, and stormed off towards the dwelling.
The long forgotten barn like structure had certainly aged a great deal more since he had stumbled upon it three years past. Perhaps this wasn’t the best place for them to be, but he dare not chance the two of them being captured.
“Come. We must remain out of sight.”
He ushered them both in through the open portal. His eyes taking a moment to adjust to the dim interior. Inside the four walls was a floor of packed dirt, a single wooden stool that sat crooked with one leg shorter than the rest, and a work bench that had seen better days.
Putting some distance between himself and the lady, he headed towards the bench and began unloading the contents of his bag upon its surface. As he lay his rapier next to the dagger he had only just removed from his side, he couldn’t help but glance repeatedly towards the figure that still loomed in the entryway, unsure of her intentions. As if she had read his mind, she moved toward the leaning stool and sat down.
“I shall not run away, if that is what you are thinking?”
Rather than be put at ease, her words mocked him.
“And why, doamnă (italicized), would that be? Perhaps you lack the wit to plan your escape, or the fortitude to see yourself home?”
“I admit I am not the most cunning of women, but it is not that at all. If the Lord wished me to be free, no amount of force could keep me here. I find that He has a larger purpose for me, so I will stay until I have found what it is He has planned.”
Her faith rankled him and he scoffed. “Of course! You too are a follower of this unseen God. Why does this not surprise me?”
“Yes I do believe in the one true God. The God who created heaven and earth, and filled the earth with His wonderful creation, but unlike most I believe He is a God of love, not of wrath.”
“Now you sound like Radu. A God who loves all, and offers salvation to those who acknowledge Him, and yet scorns those who are weak, and punishes those who are not found worthy.”
“If that is what you believe, you do not know Him at all.”
“Ah, but you see, I know Him all too well. And I curse the day he thought to turn His back on me.” He spit upon the ground, sealing his words as though they were a pact against God Himself.
When she gasped, he waited for her rebuke knowing it was soon coming. She was just like his brother! Boasting of a God who welcomed all into His arms openly, but abandoned the ones who didn’t obtain His righteous standards. Abandoned boys like Lucian had been, whose unruly ways set him apart from the rest, condemning him to a life without love.
Instead of lecturing him on the ways he should better himself, or remind him that he was too wicked to ever earn God’s love, he watched as her eyes filled with tears. What awed him the most was how close the pools were to spilling over and yet they did not, as if she willed them to remain. Her face spoke louder than any words, declaring an inner brokenness over his rebellion towards God, and great pain over the loss of his soul. In effect, she pitied him, and pity was the last thing he wished to have coming from her.
“I do not need, nor do I want your pity!”
He stormed out of the dwelling, wishing there was a door he could slam in his wake. Shutting out the image of her compassion. What a fool he was to be moved by a fair face. Hadn’t he warmed his bed with women of far greater beauty? Yet there was something deeper in this single maiden than in all the others combined, something that touched him beyond physical desire. Lucian shook his head, dismissing the very notion, and searched for the anger that kept him from any tenderness. There (italicized). He welcomed it eagerly, girding himself further against her ethereal allure. 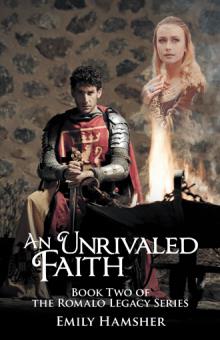 Prince Lucian of Brasov has been running from his family, from God, and even from himself. When he decides to take revenge upon his elder brother by stealing away his betrothed, Lucian is taken aback by the woman in his custody. Her pure heart and unabashed kindness thwarts his every cruel intention. Lucian finds himself hoping that she might hold the answers to heal his past, even though he knows she can never be his.


Every girl dreams of marrying her prince, so when Lady Adelina receives the unexpected announcement of her betrothal to the Prince of the realm, she takes it as a clear sign of the Lord’s will. When she is kidnapped by a band of ruffians and taken far from her home she quickly learns that the road to love is never as it seems. Though her captor portrays himself as a ruthless man, Adelina can’t help but feel compassion for him and the pain she finds lurking beneath the dark shadows of his character.

Emily Hamsher is a woman after God’s own heart who loves to read and even more so loves to write. With a Master’s degree in Education, who is also an Ordained Minister, she is pursuing a career in full time ministry as an Associate Pastor in a small town in Florida. At 24 years old she is only at the beginning of her author’s journey and seeks to open minds, inspire hearts, and create new worlds with her writing.