My Journey to Becoming a Worshipper 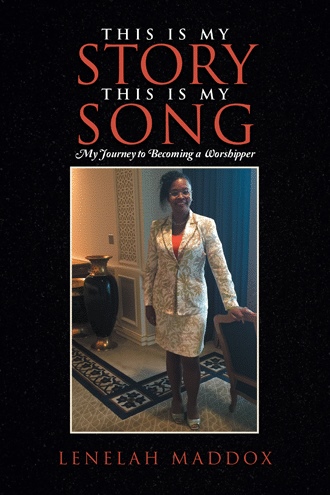 “This Is My Story This Is My Song” is an in depth look at the role music has played in shaping and influencing my life. It is also an intimate look at the collective life experiences which led to my becoming a worshipper. Many times the events we go through helps shape and define who we are as individuals. God has used these life experiences along with my predilection for music to bring about an awesome personal transformation in my life, resulting in radical change. Music has always been interwoven into every aspect of my life from early childhood to seasons of change, and everything in between. God placed music in my life as a tool for ministry, connecting to cultures and transforming lives. I have seen God use the power of music to bring about therapeutic intervention and inner healing to the brokenhearted and restore lives. Music is an effective method that God often employs to bring about radical transformation in the lives of His people. Throughout the bible you see countless stories where music played an intricate role in transforming and renewing the lives of His people. Take the following case in point. A young man named David, who was newly anointed to be the next king of Israel, played the harp to soothe King Saul’s tormented spirit. Other examples include King Jehoshaphat and the clans of Kohath and Korah who all sang praises to God that were strong and clear when confronted with enemy forces threatening to annihilate the whole of Israel. Their singing and praises resulted in God routing their enemies. Moses, Miriam, Aaron, along with the children of Israel broke out in praise and worship, and began singing and playing timbrels and the tambourines after God’s mighty deliverance out of the hands of Pharaoh and his army (1 Sam.16:23; 2 Chron. 20:20-22; Exodus 15:19-21). These are only a few examples of how God used music to transform the lives of his people, bringing about awe-inspiring changes that could only be the handiwork of God. This is why the Word of God encourages us to come before God with gladness and singing. God often wants to fellowship with His people and music in His preferred method of choice. God inhabits the praises of His people (Psalm 22:3 KJV). It’s where His glory dwells. Worship is the incubator by which miracles and transformations are birthed.

My story began on June 25, in the mid-70s in Denver, Colorado. I was born to a soon to be divorcee, 30 year old educator named Coral. The day I was born my mother was voted the happiest mother of the month because I was a girl. My mother kept shouting, “I have a girl! I have a girl! I have a girl!” If that’s not a great way to be introduced into this world, than I don’t know what is. I was named Lenelah, because my mother had a Nigerian friend named Ledise, who was an African Chief. Ledise told her to name me Lenelah if I was a girl, suffice to say I am a girl. Now had I been a boy my name would have been Yam-bo-we-bu-tu (this is the phonetic spelling of the name). I never asked my mother for the accurate spelling. My mother was very overprotective of me during the first two years of my life due to the sudden increase of “crib death syndrome” prevalent during the 1970s. She was constantly watching me and checking to see if I was breathing. I was being monitored 24 hours a day by my mother, family, and caregivers during the first two years of my life because my mother was afraid of losing her only daughter. Growing up wasn’t all rosy, but it wasn’t it all doom and gloom either. I had both good and bad times. I was a resilient child, and was raised by a village of people-you could say a collective team of individuals. It’s as if God deliberately placed so many incredibly gifted and colorful people in my mother’s life. Life was always fun and memorable, particularly with Sue and Mrs. Peggy. Sue was a former nurse turned seamstress from New England and one of my mother’s best friends and colleagues. She was married with four children, two boys and two girls. She was a very beautiful red-haired Irish woman, whom I affectionately referred to as Aunt Sue. Aunt Sue and my mother both experienced major adjustments in their lives and careers. In 1982 my mother made the temporary transition from educator to seamstress, which lasted for three short years. It was at that the juncture in her life that my mother and Aunt Sue made uniforms for the Denver Broncos. My brother and I spent our weekends at Aunt Sue’s house. We would watch MTV and listen to countless hours of the greatest rock and pop groups. I was completely mesmerized by Michael Jackson and his signature dance the “Moonwalk.” Boy did I have fun. Mom and Sue were always listening to Marvin Gaye, Bobby Blue Bland, Sam Cooke, BB King, The Four Tops, Diana Ross, Smoky Robinson, Aretha Franklin etc.; the oldies but goodies music as I affectionately coined “Music from the olden days.” A year later, in 1983 Sue would be reunited with her husband in New England. We were all sad to see Sue move, because we had become like a family. Sue and my mother would introduce each other as sister or sis, and boy would they receive strange and funny looks because Sue was white and my mother was black, but this did not deter them from doing so. Besides, my mother’s little sister looked white and was often mistaken as a striking white woman by white men due to her porcelain colored skin and European features, along with her natural red hair and petite figure. My brother and I would often be introduced as Sue’s niece and nephew and she unapologetically 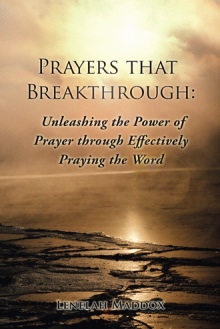 Prayers that Breakthrough: Unleashing the Power of Prayer through Effectively Praying the Word
Lenelah Maddox
$11.95

This Is My Story This Is My Song is an intimate look at my collective life experiences, which led me to becoming a worshipper. Music has always played an intricate role in the shaping of my world view and the formation of my self-ideation. More often than not, what we go through helps to shape and define who we are as individuals. God has used my life experiences along with my predilection for music to bring about awesome personal transformation in my life, resulting in radical change. Music has always been interwoven into every aspect of my life from early childhood to seasons of change and everything in between. Throughout history music has been used by God as a catalyst for change.

Lenelah Maddox is an author and has been serving the Lord since her youth. She has provided personal counsel to many hurting and broken individuals through the use of faith applied principles. God has used her as salt leading others to become thirsty for the word of God and things of God. She enjoys spending time in praise and worship. She currently resides in northern New Jersey.