To Make an Old Story New 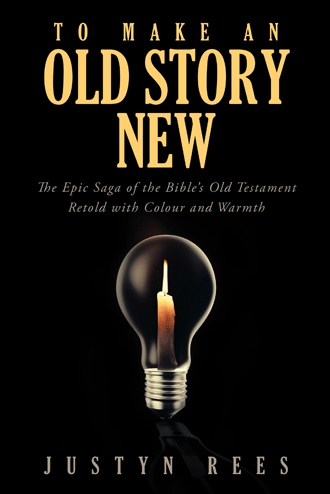 Next it was the turn of the Midianites to chastise Israel. These fierce desert people swarmed up from the south and east, and for years, they made it their business to impoverish the land, stealing livestock and destroying crops. They were led by two ruthless warlords, Zebah and Zalmunna. Israel begged the Lord for help …

Gideon was little more than a boy when these two thugs came to the family farm in Ophrah. He saw the glint of sadism in their eyes as they hacked a couple of his brothers to death. The memory haunted him into adult life, so little wonder that when he was called to be the next judge, Gideon was hiding in a wine press, secretly threshing wheat for fear the Midianites might put him to a similar fate. He glanced up to ensure he was alone and, to his horror, saw someone sitting just a few feet away, leaning against a tree, gazing into the distance.

“God be with you, mighty warrior!” the stranger said, without getting up.

“Nice thought,” Gideon retorted. “But what good would that do? Seems he’s lost his touch. Whatever happened to the good old days, when he rescued Israel from Egyptian slavery? Now he has abandoned us to Midian supremacy.”

The stranger turned and looked Gideon in the eyes. “So go and do something about it. Save Israel from Midian. I am sending you.”

Gideon invited the stranger to stay for a meal, but when he laid the food out on a rock, fire flared up and consumed the food as though it were an offering. When Gideon swung round to look at the stranger, he had vanished.

To save Israel was a grand ideal. But where should he start?

“Start at home,” came the answer that same evening. “Clean house and get rid of all trace of idolatry.”

So that night, Gideon hacked down the family idol and demolished its altar. He rebuilt a new altar to the Lord and then went to the barn and slaughtered his father’s best bull, which he sacrificed to the Lord.

Next morning, there was trouble. “Whoever is responsible for this desecration must die,” community leaders demanded.

“If Baal is a real god, he can defend his own honour without your help,” Joash, Gideon’s father, responded, jumping in to rescue his son. Further argument was eclipsed by news that the Midianites were advanceing.

At that moment, the Spirit of God came on Gideon. He blew a call to arms on a ram’s horn, and to his amazement, thousands responded. Gideon was terrified.

He couldn’t sleep that night, so, kneeling beside his bed, he prayed, “God, I need a sign that you really are with me. Nothing dramatic. How about this fleece I am kneeling on being soaked with dew in the morning, and all the ground around it bone dry?”

In the morning, he jumped out of bed and squelch! The fleece was soaking. One more step coated his now wet feet with dry dust.

But perhaps that was a natural phenomenon? “Other way round tomorrow, God. Dry fleece and wet ground! Then I’ll know it’s you. Okay?”

Next day, his bleary feet hit a warm dry fleece, but his next step sank up to the ankles in mud.

There being no further combinations of wet and dry, Gideon was forced to concede that God really was with him.

“But so that you will be quite clear that it is simply because I am with you that you will have the victory, reduce the size of your army,” God instructed him.

Gideon announced that anyone who was afraid was free to go home. Since they were already hopelessly outnumbered by Midianites, it was no surprise that two-thirds of the volunteers upped sticks and left. Gideon must have been tempted to leave with them, but he stayed, along with ten thousand others.

“Still too many!” said God. “Take them to the river for a drink.” Nine thousand seven hundred sank their faces in the water to drink, oblivious of the proximity of hostile troops. Three hundred lifted the water to their vigilant faces and drank from cupped hands. They were the chosen ones.

So there they were, just three hundred, bivouacked in the hills, and a menacing hoard of enemy marauders in the valley below. Another sleepless night.

God encouraged Gideon. “Go down and attack. But if you are afraid to go down, then just do it. Go down. Then you will find the courage you need to go down.” So he went down – great cure for the faint of heart.

He crept into the camp and overheard a conversation between two Midianites. One was recounting to the other a nightmare that had just woken him. Apparently, he had dreamed that a loaf of bread had rolled down the hill and knocked over a tent. “It’s an omen,” his friend cried. “We are finished!”

“Get up!” Gideon yelled when he got back to his camp. “God has given them to us on a plate.”

His plan could hardly be called “a plan of attack.” He spread his men around the Midianites in three companies, each man armed with only a bugle and flaming torch hidden under a clay pitcher. Then on his command, they all smashed the pitchers and blew the bugles and shouted, “The sword of the Lord and Gideon!” The sound of smashing jars, yelling men, and blaring bugles woke the sleeping Midianites. As they stumbled out of their tents, the hills were full of lights and war cries. In the darkness, it was impossible to tell friend from foe, but since all their foes were in reality safe up in the hills, they set to slaughtering one another. Survivors fled for their lives. The three hundred gave chase and were soon joined by thousands of other willing volunteers who slaughtered stragglers all the way to the Jordan River. But it was the original three hundred who pursued the survivors deep into enemy territory.

They finally caught up with the Midianite warlords, Zebah and Zalmunna, still in command of a not inconsiderable army of fifteen thousand. Thinking they were safe home, they were less vigilant than prudence should have demanded. Without a moment’s hesitation, Gideon attacked. The slaughter was complete, with the bonus of capturing the two leaders alive.

“Do you recall years ago when you came to a farm in Ophrah, near Tabor?” Gideon asked them.

An evil look came over their faces. “Yes, and we cut down to size some of those arrogant young weasels who lived there.”

“Those were my brothers.” Gideon took a sword and ended years of sleepless nights and fear-filled dreams. 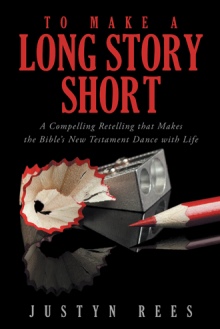 Human history is traced from our once-upon-a-time origins, through the great disaster that nearly wiped the human race from the planet. From an insignificant family of displaced nomads, kings and poets arise who will shape human destiny. Fascinating characters, fast moving action and sparkling humor track the thread of the original Bible story, allowing the narrative to live afresh today.

What others have said…

…the story line of the Bible reduced to a gripping tale, told with wit and warmth. This is the spinal cord of the world’s oldest and most influential book…

…respectful yet readable, insightful and invigorating.

…the drama, the wonder and the life changing impact of the Bible…

…a book that simply tells the story – and just the story! It’s brilliant! (Jennifer Larcombe)

…exposes the emotion of each moment with subtle details that form a new picture in one’s mind.

…the essence of the Bible—true to the text, true to the Spirit, eminently readable. (R. Paul Stevens)

Justyn Rees is a lifelong student of the Bible. His deep understanding of the book enables him to make its profound truths accessible to ordinary people. He is a storyteller whose ability to keep audiences of all ages on the edge of their seats has taken him to several continents as he tells the greatest story ever.

Born in the United Kingdom, his many British dialects lend color to the characters he portrays, while his sense of humor brings the truth he relates to street level.

Justyn’s career has included directing a conference center near London, England, pastoring one of Canada’s largest churches, leading a team of musicians and actors across Canada on a five year mission of reconciliation, facilitating a delegation of church leaders from a dozen denominations to Rwanda. He has authored several books and is in demand as a speaker at conventions and conferences on both sides of the Atlantic. Justyn now lives in British Columbia in western Canada with his wife Joy.