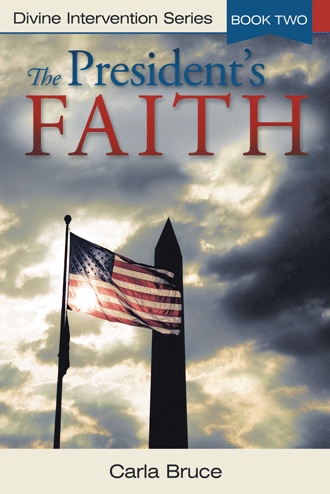 “WAIT!” PRESIDENT DRUMMOND WAKEFIELD CALLED.
Hand reaching for the door to the oval office, primary protective agent Joe Compton jerked to attention and looked over his shoulder at his commander in chief. “Mr. President?”
“I’d like a few minutes to myself in the office.”
“Certainly Sir,” Compton stepped to one side.
The president nodded and stepped into the office that he would occupy for the next four years. He could not bring himself to say, “His office,” because the oval office could never belong to any one man or woman. Time seemed altered as if only a gossamer veil separated him from the history of this room. Two more steps and he felt like he was stepping into the future. However, when he stood in front of the presidential desk, he realized that what really mattered was today. The actions or non-actions of today would shape the tomorrows.
Making his way to the plush leather chair behind the desk, he spun it around a couple of times. Looked comfortable. He would be spending a lot of time there for the next four yearsat least. He started to sit. No, not yet. Something tugged at his consciousness—or maybe his sub consciousness—something he needed to do.
Learning to pay attention to the gentle nudges of the Holy Spirit was an ongoing adventure. Not only did he appreciate the comforting presence of God’s Spirit, but also he had come to trust what he called God’s GPS system. What message or truth did God want him to be aware of today?
He turned toward the full-length window, pulled back the dark blue drapes, and looked out at the snow-covered lawn below. Then he lifted his gaze higher. The gray sky draped itself ominously over the city, shutting out the life-giving warmth of the sun.
He would miss his mountains. Maybe he’d bring in a couple of Nita’s landscapes and hang them where he could always look up and get a glimpse of his beloved Wyoming.
As he gazed out the window, his thoughts turned to the past:
What an incredible journey it had been…the unexpected request that he become his party’s candidate for president…the heady sense of being carried along as a multitude of professionals and volunteers worked to bring him out of near obscurity as Wyoming’s junior senator to the spotlight of his party’s candidate for president of the United States…the non-stop campaign and respectable victory in November.
However, none of that could compare to his experience a few days after the election when he and Nita were at the family ranch in Wyoming. That’s when his journey moved from incredible to unbelievable. Chills still ran up his spine when he pictured God’s literal invasion of his life…The angelic visit and his message had been Drum’s wake up call to return to the God and faith of his childhood…to believe that the God of the Bible was still the God of the twenty-first century. And, most astounding of all, to accept that God had a plan and a purpose for Drummond Wakefield—a purpose far beyond being president.
Since then, Drum had learned a lot about himself and about the God he had ignored for most of his lifeand he was still learning. Now, a new journey was beginning—a journey that could bring the unknown, the unusual, even the unthinkable into his presence at any timeand he would have to deal with it.
He let the drapes fall back into place, turned and walked to the middle of the room and stood on the rug bearing the presidential seal and then fell to his knees. “Oh, God, here I am—overwhelmed and awed by the reality of being the president of this great nation. Help me to serve the people of this nation as you would have me do. Help me never to forget that you care more for this nation and this world than I, or anyone else, could ever care. Help me to make wise decisions, propose beneficial programs, and set an example of faith. Like Solomon, Lord, I ask for wisdom.”
A sudden stirring of air in the room caused the hairs on the back of his neck to bristle. He wheeled around. “You!” he cried excitedly at the sight of the angel—his angel, Raphael. “I wondered….”
“Couldn’t miss this,” Raphael said and a huge smile broke across his face.
“Nice outfit,” Drum pointed to the dark blue suit, red tie, and white shirt.
“Seemed appropriate.”
“Right…” he paused, “I have to ask. Have you been in this room before?”
A smile and a shrug was the only response.
“So…have you?”
The nod said yes.
“Who?” Drum was incredulous, fascinated, and curious.
“Tall guy, beard, stove-pipe hat…”
“Lincoln…Abraham Lincoln! Wow! Who else?”
“Can’t say more—at least not now.”
“What? Is this like a need-to-know thing?”
A smile and a nod said yes.
“So,” Drum asked, “will we be meeting like this often?”
“This brief visit is most likely our last, but then,” he shrugged, “I never know.”
“I wondered….”
“The Almighty does not want you relying upon—or more importantly—anticipating angelic visitations. Think of our previous encounters as sort of a jump start to get you going.”
“Haven’t jump started a vehicle in a lot of years, but I remember how.”
“The principle is similar. The jump gets the already existing battery to operating as it should, and with use the battery builds up in strength until it is operating as the manufacturer intended.”
“So,” Drum grinned, “your intervention jump got me started so that the spirit of God, which was already within me, would begin to function as God intended.”
“More or less…” the angel replied.
“I’ll miss you,” the words caught in Drum’s throat.
“And I you,” Raphael said, a somber look on his face. He threw one arm around Drum’s shoulder and squeezed. “I’ll be watching.”
Drum nodded, felt the angel’s touch dissolve, and watched his image evaporate. 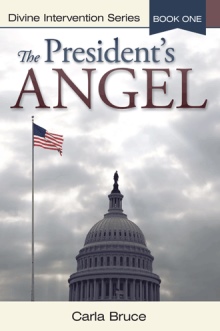 What if… we had a president more concerned with doing the right thing instead of the politically expedient thing? What if... that president was a man of simple gutsy faith who was learning to trust God in both personal and professional situations?

Follow President Drummond Wakefield’s incredible journey of faith as he shakes up the status quo of DC insiders, stirs up the ire of extremist groups, and finds himself in situations where only the “still, small voice of the Spirit” can give him the answers he so desperately needs.

“Carla Bruce is a gifted writer with a passion for the Lord. The President’s Faith, book two in Carla’s Divine Intervention series, will inspire you to pray for our nation. In this perilous time in America’s history, the insights, encouragement, and hope in this story reveal the light that can overcome the darkness in our land.”
—Mark Buckley, Senior Pastor, Living Streams Christian Church

Carla Bruce, an editor, ghostwriter, and author has worked in the writing industry for over thirty years. Her first novel, The President’s Angel, made its successful debut in 2011. With The President’s Faith, book two in the Divine Intervention series, the amazing saga of hope and faith continues. Carla is the mother of three and grandmother of eight. She and her husband, Tom, live in Arizona. She is currently working on book three, The President’s Legacy. Contact her at carlaabruce@cox.net.