The Birth of the Savior of the World 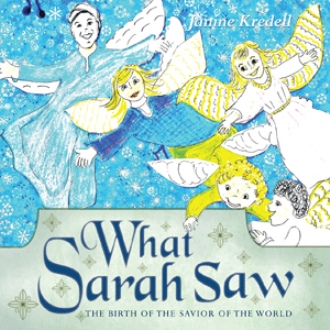 Suddenly the skies lit up and filled with angels singing, “Glory to God in the highest, peace and happiness to men.”
The angels were so close, and they were so happy! The shepherds could not even hear each other, yet they were smiling and jumping and dancing around. Bea, the little pet lamb, was running around the shepherds in circles with her tail up in the air.
Then, after the best singing ever heard on the earth in the history of the whole wide world was over, the angels left.
Jeremiah, Jedadiah and Jonah were singing, “Glory Glory, Glory, Lord God Almighty!”
Samuel, Samson, and Saul were singing. “Hallelujah, hallelujah, hallelujah, yes!
Abraham was dancing up a storm: then he said, “Hey! We can go to Bethlehem and see the baby Jesus, the Savior of the World” . The others yelled, “Yes!”
Jonah asked, “Who will watch the sheep?”
The others yelled, “The angels!”
It was the best night of their whole entire lives, and they couldn’t stop singing and dancing! 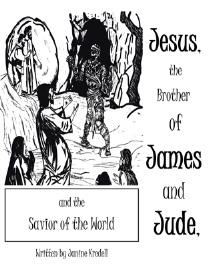 Jesus, the Brother of James and Jude, and the Savior of the World
Janine Kredell
$13.95

Good News travels fast! We call it social networking now, but people have told their friends and families the news for centuries. Can you imagine the reaction of people hearing the shepherds telling about the skies full of angels singing, or that they saw the Savior was the night he was born in Bethlehem? It was too exciting not to tell anyone who had not heard that the Savior was born! The Good News was told to many, many people.

Janine Kredell is a retired school teacher from Michigan who moved with her husband, David, to Scottsdale, Arizona, on the first day of summer. She has worked with children all her life, and she loves their curiosity and joy when discovering something new. Recently she moved to the mile high city of Prescott in the central area of Arizona, where she plans to continue working with children and writing books.