Jesus, the Brother of James and Jude, and the Savior of the World 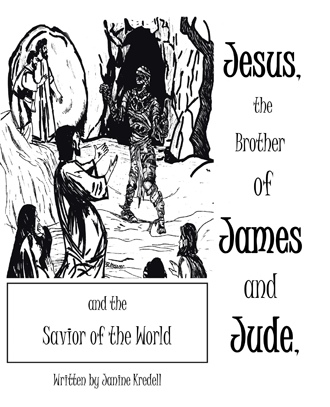 Walking back to his disciples where the disciples stood, Jesus chatted with his friends who had been with him for three years. Looking at all of them, he asked them to sit down on the grass with him. “Watch, listen and then believe what the Son of the Father can do. “

Walking over to Jesus, Mary fell at his feet crying. Seeing Mary cry made Jesus sad and he knelt down beside her. Jesus let the tears run down his face as well.

“Lord, I wish you had been closer to Bethany. If you had been in Jerusalem, I know Lazarus would still be alive. “

The large crowd was all standing together in a hushed silence until someone was heard to say,” Too bad he hadn’t been there sooner. You know, one word from Jesus would have healed Lazarus.” “Mary, where is he now?”

“I will show you, Jesus. It is just off the road, not far away.”

They walked up to the tomb, cut into rock with a large stone in front of the opening. Jesus looked at James and Jude and commanded them to move the stone.

Martha was horrified. She did not want to see her brother like this, dead, wrapped in strips, and with the awful smell of death. She looked at Jesus with her eyes wide open, and opened her mouth to speak. ‘Lord?”

Jesus looked at Martha,” You told me you believed. Let me show you again the Power and the Glory of God.”

The brothers had moved the stone, and now stood looking at Jesus; looking heavenward and holding hands.

So everyone could hear Him clearly speak, Jesus said in a loud voice, “Lazarus, come out.”

The disciples stood up while Lazarus was getting hung upon the rock with the strips of cloth. Jesus had a big smile on his face and said to James and John, “Go over help Lazarus; unwrap him so he can walk out of there.”

All of a sudden, relieved laughter broke out from the disciples, as they watched James and John. Mary and Martha had ran over and said move it you two; let us take over. Peter had run over to Lazarus with his canteen of water.

Lazarus drank all the water, raised his arms high in the air and sang loudly, “Hallelujah,” in the beloved melody for Sabbath worship at the temple. At that, all the people stood up to look and respond to Lazarus.

The disciples, the sisters, the Marys and Jesus sang the phrase loudly back to Lazarus.

Lazarus took two steps forward and sang, “And thou shalt love the Lord thy God with all thine heart, and with all thy soul, and with all thy might.” (KJV) Lazarus was often the cantor at the worship service, and he was chanting his part of the weekly service. The people standing all knew the responses to the phrases that Lazarus sang.

As they smiled, the crowd sang the next phrase back to Lazarus, “Blessed is the man that trusts in the Lord, and whose hope the Lord is. (NIV)

Lazarus walked up to Jesus, turned and sang to the crowd,” And thou shalt rejoice in every good thing which the Lord thy God hath given unto thee, “(KJV)

The crowd lifted their arms and sang loudly,” The Lord is my rock, and my fortress, and my deliverer” (KJV).

Lazarus wrapped his arms around Jesus and whispered something in his ear. Jesus smiled. Scanning the crowd for his sisters, Lazarus turned and seeing them, he yelled, “Martha! Is there anything to eat in the house for me and my friends?”

Martha cupped her hands and yelled back, “We shall roast our best lambs! Everyone, please come back to the house for a celebration, for Jesus had brought Lazarus, my brother back to life!”

The crowd sang hymns of hallelujahs as they walked back to the house.

The people seemed to know that Lazarus and Jesus would want some time together before greeting the guests.

All watched Jesus and Lazarus walk down the road away from the house, deep in conversation. They were about fifty yards away when Jesus turned and put both his hands on both of the shoulders of Lazarus. Turning back, they started walking back up the road, toward their friends, and kept walking right back to the house.

Watching the response of everyone, Caiaphas, the High Priest and his friends, turned and walked back to Jerusalem.

What did Lazarus do after he came out of the tomb? What happened to Peter after he denied his best friend and Savior after the rooster crowed twice? Did Mary, the mother of Jesus, ever talk about Jesus as a baby to anyone? When did the brothers of Jesus realize he was their Lord and Savior? Why was Mary Magdalene at the tomb? What happened to the donkeys from the book What Sarah Saw?

Jesus, the Brother of James and Jude, the Savior of the World, attempts to answer these questions. It is my hope you think about the last days of Jesus’ life on Earth and look in the Bible for answers to all your questions.

“For I know the plans I have for you,” declares the Lord, “plans to prosper you and not to harm you, plans to give you hope and a future.”

After Janine moved to central Arizona, God placed her in a charter school in Prescott Valley with delightful children ready to learn.

Mary and Joseph were blessed with a family with Jesus, James and Jude, brothers and sisters, aunts, uncles and cousins. The family accepted Jesus into their family. We accept Jesus as our Sovereign Lord and Savior, and the plans He has for us.