A Mother's Kitchen Poetry and Her Son's Retrospections 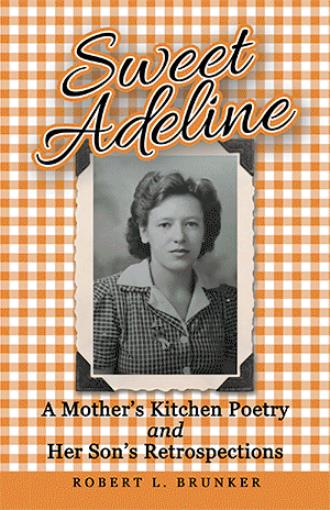 One evening approaching mid-night I received a call from my mother. Her voice rung more with determination than it did with fear as she told me why she called at a late hour.

“There is a strange man in my bed,” she said with a simple tone as if she were telling me there was a strange dog in her yard.

“It’s your husband, Gilbert,” I assured her.

I directed her, “Go look at his face and then go into the family room and look at you and Gilbert’s anniversary picture hanging on the wall and see if that is the same man.” She laid the telephone down indicated by the thud I heard. A few minutes passed.

She came back to the phone and flatly said without emotion, “Its Gilbert.” Click . . . dial tone.

Twenty minutes later I got another phone call. This time it was from Adeline’s brother, Tom, who lived on the opposite side of the state of Missouri.

“Robert, I got an unusual phone call a few minutes ago from your mother.”

“Yes, so did I.” I had to break the news to him that his sister’s Alzheimer’s was now going from periodic symptomology to consistent presence.

Isn’t it an evil disease? She could remember my phone number and her brother’s phone number without looking it up. She did not have a cell phone, just a simple push button land line phone on the wall in the kitchen. She knew our numbers by memory, but she did not recall the face of her husband of fifty years. Satanic familial evil.

That incident was repeated a couple of times. I think Dad was thankful he did not own a handgun.

As the symptomology continued to increase the periods of lucidity decreased in numbers and duration. Dad assumed the cooking duties and was capable of doing it for a reasonable time. The house was kept far better than most young couples having a family, but less than Mom’s standards set over the previous five decades. Dad’s sight was declining. He had age related macular degeneration long before it was diagnosed. He was becoming more and more aware of losing his visual acuity.

The blessing she got from God is she behaved like she was one of the attending staff. I am sure that most of the time she realized she was a resident of the facility, but her servant nature would bleed through, and she adjusted by taking on that well-rehearsed role. She would help people coming and going to lunch, return lost residents wandering in the halls to their rooms, talk with visitors to other residents and brag about how well their loved one was doing.

Let me give you a true anecdote that illustrates the nature of her relationship with the staff.

My younger daughter came home from a day of teaching her kindergartners with a big smile on her face. She is a tenured teacher and frequently has student teachers under her. Also, she is an unofficial leader of the multiple kindergarten teachers informal task group. At an informal meeting including the current student teachers, one of the student teachers said that her sister just had a baby and they named her after a sweet elderly resident of the Alzheimer’s unit her nurse-sister worked in. She went on to say, “Everyone, staff and residents alike, loves this woman. She is a constant joy. She had an old-fashioned name that my sister loves. They named their little girl, Adeline.”

My daughter followed up with the question, “Where does your sister work?” Some follow up questions confirmed it was our Sweet Adeline! It turned out the grandmother and grandfather of baby Adeline are friends of ours. Grandpa had worked as my dental assistant on multiple mission trips to Jamaica. Small world! That story was a boost to our whole family dealing with Sweet Adeline’s decline. Sweet Adeline was still doing her Father’s will.

Make the best of each of your days.

Use your love in the very best way.

Start each day with a song in your heart.

Do not let annoying little thoughts have any part.

Do not let making money take all your time.

No matter if you do not have a single dime.

Remember to always put God in your life first

And my dear children you will never thirst.

On a visit when I took Dad to see her and after the initial excitement of our presence settled down, we all sat around and had a normal conversation without the presence of our old friend Alzheimer. Oddly, but true to form for a servant receiving calming grace from her God, she started talking about her life there. She told a few short anecdotes about her fellow residents. Then she made this remark.

“I just don’t know how much longer I can work here. You know, I am not a spring chicken anymore.”

Her whole life was a series of adjustments that she faced head on, especially in her place of domicile. On one plane she probably knew that she was a resident, but on another her engrained discipleship caused her to truly submit to the will of God, accept her position in life, and focused on God. Her poetry and her life are a witness to the assessment above. Consider the short poems that came later in her life.

If you are just a little bush on the side of a hill,

And not a beautiful tree by the side of the sea,

Then be the best little bush that you can be.

The little snowflakes drifted to earth

Only to find they could not last.

To liquid they turned and watered the turf.

Each spring a bit of their being will come to pass.

A child orphaned by the death of her mother and the absence of her father as he worked remotely during the depression is taken in by her father’s parents. Both grandparents die in a few years. Her father’s sister opens her heart and home to this sweet child. Adeline’s happiness is limited by the separation from her brother. As a young woman Adeline meets and marries a handsome orphan after World War II. Their love grows, their discipleship grows, and they flourish in the grace of God, but always within a very limited income. As she writes her poetry at her kitchen table between household duties, Adeline expresses her love for God, husband, children, family values, and expresses appreciation for long term friendship. Her firstborn son collects this simple kitchen poetry over a period of nearly forty years. As he collects them he writes retrospections as he looks back on his mother’s life, her struggles with Alzheimer’s, his own life, and includes social commentary. Reflections, family history, Christian testimony, poetry, and grand story telling will lead you through an emotional, yet fulfilling, tale of a simple woman living a life where God puts you. Alzheimer’s and Satan did not defeat her. Her life had a huge positive effect on the lives she touched. Sweet Adeline is a feel-good biography that will allow you to reflect on your own life.

Robert L. Brunker is the first child of Gilbert and Adeline Brunker. He witnessed sixty-one years of Sweet Adeline’s life. As her life lessons took root in his life and he became aware of her “Kitchen Poetry,” he started collecting her verses. For over thirty years he wrote what he called retrospections—reflections on how his mother’s life examples influenced him and how that was summarized in her various poems. This effort evolved into one of his bucket list items to be completed in his retirement years. During most of the forty-two years he practiced dentistry, he helped raise two daughters, edited his state’s dental journal, went on thirteen medical missions to Jamaica, and engaged his grandchildren in illustrating his first Christian juvenile novel. He serves on the Board of Elders of his church and continues to make mountains of sawdust from his woodworking projects at the aggravation of his wife of fifty-five years.