Is Jehovah Universally the only Supreme God?

In the beginning God created 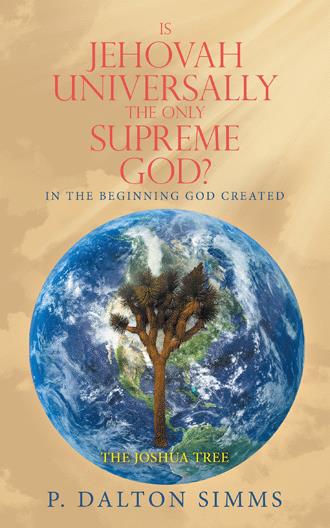 Chapter one Now frankly speaking to my knowledge, not one of us human beings were anywhere around to see or can prove how this universe came to be; however, let us assume that it is mere speculation or alleged assumptions of unknowledgeable, humans. Or concerned, curious, desperate scientist doing their research in trying to prove or to find out as to what, or how it all happened. Opposed to just accepting what the scrolls, or the biblical records states. (Nonetheless for the record humans are very curious beings) However, scientifically speaking, some theories, or even some facts in findings or in discoveries, might bring some people to acknowledge that this universe has a creator. Nonetheless at the end of it all, will there be any that can attain as to what really happened? Since it has been noted that only the creator or whosever else was present, could be able to give account or be completely sure in knowing exactly as to what took place and how the universe come into exist stance. The Holy Books and their words might be the only clues or evidence that humans have as any proof, other than archeological discovery which sometime proves that certain events might have been. Bottom line is, we can believe, or not believe, that is the question and answer to the whole matter. So, then I, P. Dalton Simms the author inspired by the Holy Spirit to author this book. Tilted, Is Jehovah universally the only Supreme God? Honestly Is not one bit interested neither am I concerned or do I care what mere humans thinks or assume. As creation is already here and here to stay even after I am gone. Among this book there are other, as followed by their titles. #1 A BOY NAMED JESUS, #2 Gamblers, both already published. In line to be published are as fallowed the. Who really are the rainbow people. The Bossy Little Sparrow, The Mystic Fish that made Granma so rich. The Tree of life. Little Wiggly Tail Piglet. Azaar and his Dog Benbow, hopefully soon to be published. (Exodus 20: 24, KJV. Where I record my name, I will come to thee, and I will bless thee) That men may know that thou, whose name alone is JEHAVOAH, art the highest over all the earth. Psalm 83:18 KJV. Therefore, behold, I will this once cause them to know, will cause them to know my hand and my might; and they shall know that my name is the Lord. Jeremiah 16: I21KJV. in the beginning Jehovah’s voice echoed Now in my own train of thoughts. When Jehovah spoke, perfection knew it is place and performed the duty given to it. By the only expert builder and architect, the supervisor, and constructor of his creation. When he spoke, without a doubt the air, wind, water, and fire, atoms and molecules already knew their possessions. And without any questions or hesitation they came together and dutifully performed. when the mighty voice of Jehovah echoed and declared his majestically ways and powers, making known through His action that he can do all, any, and everything possible, who in him nothing is impossible. The world was void and without shape the spirit and voice of impressive Jehovah echoed, and the heaven and earth appeared declaring that he alone is the great I AM in all entireties, the Alpha and the Omega, the Aleph Tov. the beginning and the ending the first and the last. He that shuts and none can open, He who opens, and none can shut. (Biblical this is my belief that it was so, and I give credit and I am positively certain that he did not have to repeat himself when he spoke) Then in his complete wisdom, knowledge, and understanding he divided each part putting them all in their rightful places and was pleased with his perfectly completed works. For Examples, earth, seas, skies, firmaments, and heavens, the fullness thereof, and humankind. And do not forget that in five days, it is noted that Jehovah God with his mighty and miraculous powers finished a portion of his work and said it’s good.Then on the sixth day the most important part to him was creating human, which he did and said it was particularly good. Bible references, Geneses 1: 2-4 KJV. Geneses 2:24 KJV He then rested on the seventh day. Obviously, Holy God wanted to create every need and comfort for humankind before creating them, and in his likeness and image as his friend he created them. How very thoughtful, unselfish, and noble is the Creator. When God said let us make man, let the record shows that he took dust from the earth and formed man in his own image and likeness. Then from his own nostril he blew the of breath of life into mans’ lifeless body and man became a living soul. Geneses 2: 27KJV Wow! Impressive, and God named him Adam, red blooded man. Wow! Don’t you feel special to be created in the image of Holy God, and not the image of a monkey contrary to popular beliefs, I beg to differ; could it be on their side of family, not on mine, how about on yours?

To all who may be privileged to encounter this book, I do hope that it can bring a tranquil peace knowing that it speaks of a creator and at the same time points to scriptures that might or might not convince its readers. Believing in a creator or not is a freedom of choice duly given even before one enters into creation. So, before accepting or not grab a copy and read for yourself then feel free to disagree or not. We will still be cardual friends, author and reader, believer or none believer the creator loves us all equally the same. Just or unjust the rain falls for all so as the sun moon and stars shines for all, we all live and die so as the beast weather we have a few letters to our names or a bank full of money our wealth or possessions does not make us exist any longer than our time here on planet earth. So believing in a supreme God or not it does not matter as the world keeps on turning and things roll over. My greatest desires are for humanity to live in peace and love. So read and voice your opinion privately or not, to the question on the title of the book, Is Jehovah the only Supreme God? Everyone has the responsibility in believing in a creator just as they do, and also accept rulers over them here on earth.

My name is P. Dalton Simms, a native of the beautiful sunshine island of Jamaica. My aim and goal in life is to point others to the important things. So I author books that depict love, peace and harmony. My first published book, a children’s book titled A Boy Named Jesus, is very inspiring. Also my second, third and fourth books are all based on inspiration, love and patience which will be my legacy to the present and future generation..