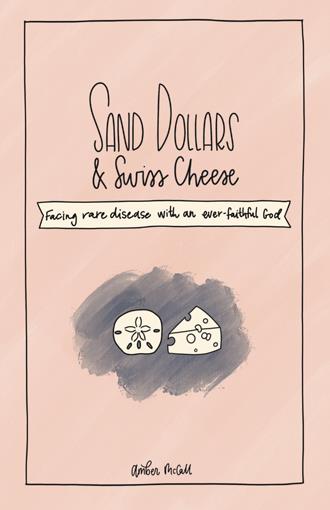 “Three ... two ... one ... Happy New Year!” It wasn’t an ideal place to ring in 1999. As everyone around me celebrated, I sat in my hospital bed and wondered where the nurse had put the pan, because my tummy just wouldn’t stop its gymnastics routine. In fact, it’d been trying to go for the gold since early that morning. Like so many times before, the doctors just weren’t sure what was wrong with me. This time they ruled out the possibility of meningitis, but only because I could touch my chin to my chest, despite the fact that I couldn’t keep anything down and had a migraine larger than life. Little did I know, the “we’re just not sure” diagnosis would be the number one hit for the next twenty years of my life.

We’ll get to that. First, a little background building (I’m a bilingual teacher; that’s what I do). My navy parents met in the bar from the movie Top Gun, got married, and shortly after, had me— born at the naval hospital on the base in San Diego, California, in the spring of 1988. I would love to say we stayed there, and I grew up on the beach—well, I did, but not that one. Our family of three was transferred to San Antonio, Texas, when I was about eight months old. We stayed for less than a year and then found ourselves on another beach in Charleston, South Carolina.

In Charleston, we were greeted with strong winds and torrential rain as Hurricane Hugo hit the shores in September 1989. I don’t have memories of the storm, but I have seen footage (recorded on a large camcorder with an actual VHS tape—if you don’t know what that is, google it!) of me with beautiful tan baby rolls wearing nothing but a diaper, eating an apple larger than my head, and walking around outside during the eye of the hurricane. Actually to be fair, I don’t think I was allowed outside, but I have seen the video evidence of the huge trees that fell and the cars that were flipped over in our neighborhood. Our country has seen plenty of devastation caused by horrible hurricanes in the past few years, but I hear Hugo was a monster of a storm as well! Thankfully, our family stayed safe by hiding in our bathtub under a mattress. It sounds like a joke, but it’s not.

My brother endured the storm in utero and was born late that fall. I quickly had someone to translate for! I was the best big sister and made sure he got all of his needs met, especially when that meant we both got what we wanted. As I mentioned, we grew up on the beach, eating sand and building sand castles. You know, the drip ones where you hold wet sand in the air until it spills onto itself and starts to resemble a stalagmite. Those were my favorite!

Sand dollars make up the other part of my Charleston memories. I remember the adults would wade far out into the ocean (Okay, only about twenty yards or so, but for a three-year-old that’s far!) and rake their toes through the sand. Eventually, someone would dive head-first into the water and after what seemed like an eternity, pull out a gross-looking green disc. Waiting for the disc to dry in the sun for a few hours was the hard part, and what was worse, after all that wait, we could finally clean off all the algae and seaweed only to wait some more! Several days later, the coolest thing would happen. My mom or dad would break the sand dollar in half and tiny pieces would come out. We called them angel wings.

Okay, we’ve waited so long for the angel wings that it’s now the spring of 1992 (I told you it seemed like a really, really long time), during which my baby sister was born. By this point, I was a four-year-old, walking, talking machine telling the world about how cool my little brother was and how I was going to take the best care of my little sister. My mom had left the navy at this point, but my dad was finishing nursing school, so he had to stay in Charleston. Since I was about to start school, my mom moved the three of us kids to her parents’ house in Green Bay, Wisconsin, our third move. I attended Pilgrim Lutheran for 4K and don’t remember much of it other than the fact that I did not like milk patrol because it meant I had to carry that ugly plastic bin into the dark, scary basement with an uncooperative boy.

Like many girls who grew up in the nineties, I was adorned with larger-than-life scrunchies and hair bows, stirrup leggings (you know, the ones with the elastic under your feet so they didn’t ride up—if you’re younger than me, these might be as foreign as the VCR and camcorder), and some sort of awful, colorful windbreaker or mock turtleneck. I do remember one birthday when I was gifted a super cool purple Beauty and the Beast skirt that had roses all over it. Disney movies were “totally tubular” and so were the TMNT (Teenage Mutant Ninja Turtles for those of you who don’t know). I spent my days playing teacher in our vintage school desks (those would be so “in” right now) or playing mom to my Baby Alive doll. I also grew to love Polly Pockets and Pound Puppies. Man, Pokémon Go has nothing on those Pound Puppies which quickly became bartering tools in my elementary school. They were adorable, tradeable, and pretty easily hideable.

Author Amber McCall would like to think that her rare disease doesn’t define her—it’s not who she is, after all. And yet in conjunction with many other things, it has shaped who she has become.

Sand Dollars and Swiss Cheese shares McCall’s life story—a story about everything. She recounts the fears, joys, frustrations, and triumph, as well as the hopeful moments when she chose to put her trust in the God who is bigger than all of it. She prays that her life experiences will encourage you, give you strength to face your mountains, and open you to the grace that is so abundantly available to those who choose joy. Choosing joy and hope through the darkest moments strengthened her faith and allowed her to continue to pursue a career in education, start her own business, and share her faith with others.

This candid, heartfelt memoir tells the tale of a life riddled with chronic diseases and the hope that comes from living that life with a faithful God who heals.

Amber McCall has spent her life navigating the difficulties and unknowns of the healthcare field, especially after receiving diagnoses of two rare diseases. She is a lifelong learner and educator who now works in the ed tech world and supports rare disease advocacy. She owns a small creative business and sells her art online. She lives in Chicagoland with her supportive husband and lively dog.