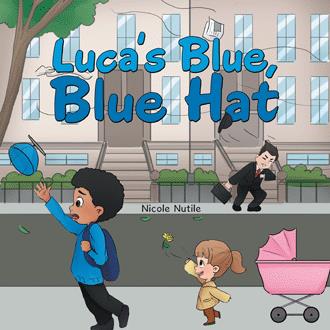 One sunny morning Luca was getting ready for school. As he was walking out the front door his mom shouted, “Luca, don’t forget your hat, it’s getting chilly.”

Luca grabbed his blue hat and off he went. The wind was blowing all around New York City. Newspapers were playing hopscotch with flowers and as Luca stopped to watch a daisy dancing with a bird, a big gust of wind came by and WHOOOOSH took his blue hat away.

Luca tried to catch his hat, but the wind was too strong.

He ran, jumped, and chased the blue hat through buildings and blocks but it was too high to reach. The blue hat was being whisked away on a journey. With a tear in his eye Luca sadly watched his blue hat soar into the sky.

An exciting, magical journey for all children! Join Luca and his favorite blue hat as they explore famous landmarks around the globe and eventually make their way back to each other.

Nicole Nutile is a soon to be best selling author. Luca’s Blue, Blue Hat is the first book in her series of educational children’s stories. Her passion for art and writing began early on and she completed this book in dedication to her son, Luca.