A Beam of Hope 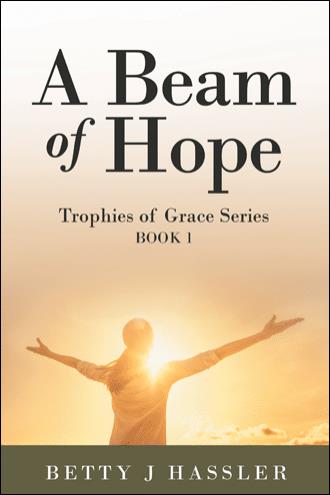 Layton Brooks stood in the doorway of his man cave. Years ago he’d playfully posted a KEEP OUT sign on the door. However, a mischievous nine-year-old had scratched through it with a big red X. With large letters she’d carefully printed, COME ON IN.

Now the little girl was grown and away at college. However, the invitation stood. Inside, friends and family had taken their places around an imposing trophy case on the back wall between two windows. On the top shelves stood his most prized possessions. Each trophy was engraved with a person’s name, date, and quality he or she represented. These heroes of faith had been his spiritual mentors. When it was time to unveil a new trophy, he’d presented it to those gathered to “build faith muscles,” as he put it.

Layton ambled toward his recliner, coffee cup in hand, eyes still on the trophy case. The idea had come from Meme Dyer, his daughter Brianne’s grandmother. Meme had affirmed that God’s good purposes in Brianne’s illness would be a trophy of His grace.

Layton had looked again at the wooden cabinet. Hmm, he’d mused, a trophy case to display God’s grace! Suddenly, the piece of furniture took on a whole new meaning.

The trauma of their young daughter’s cancer surgery leads Layton and Amy Brooks to reexamine the assumptions that drove them to divorce. To restore intimacy, they must reframe former events—with honesty, grace, and forgiveness.

When cancer strikes the young girl again, the family’s fledgling faith encounters new challenges. Will Layton and Amy have the strength to rear a disabled child? How will Brianne cope?

As Brianne navigates her unexpected path, her strength teaches others what it means to be truly whole. A Beam of Hope is a story of coming to terms with grief and loss—and embracing renewed hope and unexpected grace.

“These characters are flawed, yet loveable. I found myself rooting for them in their struggles and trials.”

—Lori Hatcher, author of Hungry for God ... Starving for Time

Dr. Betty J Hassler loves to translate her forty years as a pastor’s wife into true-to-life stories of families growing in their faith despite life’s difficulties.

Betty is an accomplished speaker, writer, and author of both nonfiction and fiction titles. With seventeen years of experience in Christian publishing, she is now a freelance editor and writer. She lives with her husband and near her two sons and grandchildren in northwest Florida.