When Marriages Aren’t Working: An Inspiring Personal Story of a Couple Who Found Happiness When God Brought Them Together Following Their Difficult Decisions to Divorce 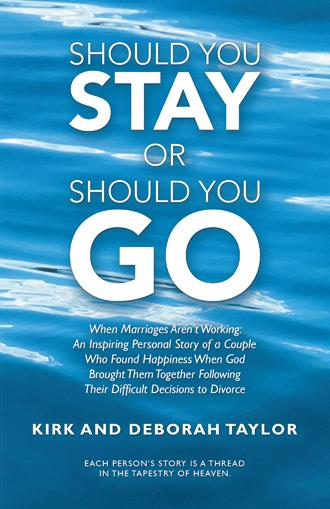 There once was an adventurous ten-year-old boy named Kirk who lived in Denver. He was fascinated with the water and would ride on the city bus at age ten for 35 minutes each way to the Denver Athletic Club to take swimming lessons. He broke his leg skim boarding on a lake and dreamed of the ocean. One summer, his parents took him to the ocean in southern California. He fell in love with the bright sun, rolling waves, and watching the surfers. It was in the 1960’s. The Beach Boys were singing songs about surfers and about surfer girls. A few years later, he found out that he and his family were moving to the Pacific Coast, near the Beach. He mowed lawns and shoveled snow to save money for a surfboard. The first thing he did when he arrived in California was to go and buy a surfboard. He walked two blocks to a local surfboard shop, asked what board was good to learn on and bought it. It was blue and white, a used one, but in good condition. He immediately headed down to the ocean and asked the older surfers how to get up on the board. His passion for surfing began.

Around the same time, in northern Nevada, there was a young girl named Lori who dreamed about surfer dudes and imagined how wonderful it would be to be a surfer girl. She would listen to Wolf Man Jack on her transistor radio every evening at 8:30 pm. As she closed her eyes and visions of boys with sun bleached hair surfing in California would appear as she listened to the Beach Boy’s songs. To be a little surfer girl would be the ultimate dream. Loving the water, she spent every summer at the lake with long days at the beach swimming and sun bathing. Her skin became golden brown and her brunette hair had streaks of gold. She was the captain of the family ski boat and spent most mornings boating and pulling her sisters and friends over the cold, blue waters on water skis. She wondered how it would be in Southern California as a California girl.

How these two people ended up together 50 years later was an act of God. He wove their stories into one that brought them to Hawaii, where Kirk is a surfer dude and Lori is a surfer girl.

The perfect dream girl would ride in my VW van with me, sharing all of the fun surf and ocean adventures. I did not have a specific list of the attributes and qualities of such a “dream girl,” but there was an intense yearning to share my life with someone special. That dream came true at age sixty-six, when Lori came into my life. My first marriage was a “hope” for a dream girl and a “wishing” for the fulfilling of my heart’s yearning, but it never worked out nor materialized.

I got married the first time when I was twenty-three, to a girl from the Christian fellowship we were attending. I remember the minister telling me I was perhaps more in love with the idea of marriage than the girl. She was right. The first six months of the marriage were hell. Pure hell! She was an only child, had been stifled and controlled by her mother, and her mom was determined to not let her go. Her mom actually wanted us to move into a “to be built” apartment above their garage. But we planned to move back to Hawaii. Her mother would call and have my ex in a state of severe emotional distress time and time again. My ex could not process her way out of the turmoil. Over a few days the episode would subside, only to rise and repeat itself again. I was really damaged by all of this, but hung in thinking I must. There was a physical reaction in my gut every time the phone rang, wondering if it was her mother ready to attack once again. Looking back, I think God gave me six months with no pregnancy to get out of the marriage. I simply did not see it then. My frame of mind was that I was married, and I could not change that. Marriage was not escapable, and I was stuck! I should have taken her home to her parents and gone on my way …. alone.

One incident that occurred in my first marriage illustrates the ongoing craziness of my ex’s behavior. We were on vacation with the youngest child at a fast-food restaurant. She was nine. We were in a long line and had picked out our orders. When we got near the front, my daughter changed her mind. My ex threw a fit – he yelled loudly, stomped about and left in a rage. He drove off in the rental car and left us there! This is before cell phones, so we were stuck. We had to sit there in embarrassment for about an hour until he came back. These repeated episodes put me in a constant state of hyper-vigilance. In so many instances I could not fight back or take flight, I could only freeze. Freezing is what I had learned to do when he threw fits at home or in public. He was very loud with aggressive body language.

God looks at our hearts. He saw that the love I had for my ex in my heart was pretty much gone. Marriage is of the Heart – two people who are connected in their hearts and souls with God involved. 1Samuel 16:7 “…For the Lord sees not as man sees: man looks on the outward appearance, but the Lord looks on the heart.” I was not being truthful as I ignored my true feelings. God saw where I was and He saw me coping with this difficult marriage and the wish to be out of it but the belief that I had to stay in it no matter what.

Are you struggling in a difficult marriage and trying to decide what steps to take next? Be honest with yourself about your situation and choose to either repair or leave the marriage—and ensure that God is involved in your decision-making process.

Written with the hope of helping others, Should You Stay or Should You Go shares the inspirational personal story of Kirk and Deborah Taylor, who know that God has blessed their marriage together as they walk in His guidance of what He has designed marriage to be. They talk about their childhood experiences and how these experiences shaped them to be who they are as adults. Both were in difficult long-term marriages. They describe their struggles with being Christians and thinking God’s displeasure would certainly be upon them if they divorced. They stayed in their marriages and tried to repair their relationships. But eventually both decided to divorce after realizing their marriages weren’t refining them but damaging them.

This personal narrative and faith-inspired guide tells the story of two people who dealt with long-term marriages that ended in divorce—and who later found each other with God’s help, and now have a fulfilling and loving second marriage.

Kirk Taylor became a Christian at age twenty. He then served in many lay ministry positions for years in various capacities; from missionary, worship leader to Associate Pastor. He worked in the distribution business and eventually became president and owner of his own company. After a stressful marriage, he divorced his wife of forty-three years and only then found deep happiness and blessing.

Deborah Taylor was introduced to the Lord at a young age and rededicated herself to Him at several key points in her life. Her journey in marriage began at age seventeen, and it was a difficult road. She became a Christian Counselor after receiving her Master’s Degree and excelled in that for many years before retiring. She found true happiness only after leaving her first husband of thirty-five years and marrying the love of her life.