I Love Him More 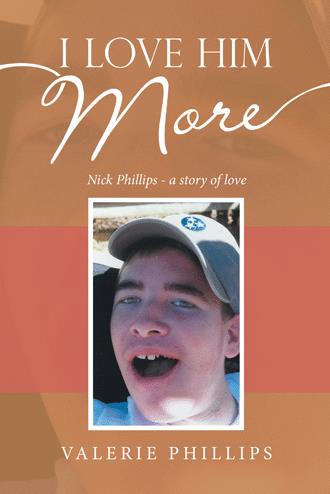 Nick got a red powered ride-on motorcycle when he was 4 or 5 for his birthday. I think it was when he was 5. Anyway, he loved that thing! Before he got this horrific disease, we would move the cars over into the yard and clear the driveway for him. I guess it’s significant here to point out that our driveway is very steep. It starts up at the road and comes at a sharp downward slope down to our house. When it snows, the only way we go anywhere is to shovel. Ok, back to the motorcycle. So, before Nick had ALD (the short name for adrenoleukodystrophy), he would take the motorcycle as far as it would pull up the hill of the driveway and when it wouldn’t go any further, he would turn and shoot down the driveway and into our basement and then spin to a halt in there! It was something to watch! And he loved it. He rode that thing everywhere but that was his favorite place to ride it. Anyway, after the disease, and when he got more stabilized, we decided to try it again, with a lot of modifications, of course. The first and most notable modification was me! I rode it with him. Now, you might question how in the world a ride on motorized motorcycle made for a five-year-old would now hold up a grown woman and a 6 or 7-year-old? The answer is easy and here it is. I DO NOT KNOW. I absolutely do not know how it did it, but all I can tell you is that it did! Not once, not twice, but probably a hundred times over the years before it finally collapsed. Let me describe the scenario further for you if I can. Not only is there a steep hill down from the road to our house, where the land levels off really just enough for our house to set on, but then the steep hill continues to go down and down for the half acre yard that we have, until it ends at the fence behind our backyard where our neighbor’s field of cows starts. Right behind our driveway outside the garage/basement, we planted bushes many years ago to keep it from eroding and now those bushes are really big. So, the decision was made, by somebody other than myself I feel sure, that we were going to go off the side of the driveway in front of the house and proceed down the yard alongside the driveway and then proceed as far as we could get down the backyard! Got the picture? Ok.

The first time, I was pretty terrified. I wasn’t terrified anymore about doing it, just about the possibility of Nick getting uncomfortable or getting hurt in any way during the ride and me not being able to protect him. That’s all we ever cared about. So, I sat down on the motorcycle like a person would, one leg on both sides. Then, I scooted back on the seat as far as I could without falling off the back (yes, I fell off the back a time or two over the course of the years). Darryl and Abby would set Nick in front of me and his legs were very stiff but we would be able to get them far enough apart to go on either side of the steering column, but they were tight on it. Then, I would put my legs under his where I could protect his legs if anything happened. Darryl and Abby or sometimes, just Darryl, then pulled us up to the place where we could safely get off the side of the driveway, and off we went! Now, I did have a brake pedal if there was an emergency, and if it would work, of course. I mean, come on, we were in uncharted territory here! Anyway, I hadn’t felt that free in a long time! THERE WAS NO ADRENOLEUKODYSTROPHY AT THAT MOMENT! JUST A CRAZY BOY AND HIS CRAZY MOM HAVING A BLAST!! I am not kidding you! We flew down that backyard! There were trees to dodge and stumps to dodge and sticks to run over and none of it slowed us down very much! We flew! We went all the way to the fence and would’ve been able to go further if there hadn’t have been a fence! We were both exhilarated when we got to the bottom, and from the look on Darryl’s face and Abby’s, it must have been a lot scarier to watch than it was to do! We just sat there, reveling in our accomplishment for a minute and laughing and laughing! It took Darryl and Abby a minute to get to us. I just remember how much fun that moment was. Just getting to sit there on that motorcycle with my crazy, amazing son! What a blessing those moments were! And there were a lot of them! over the years! A lot of them!

Anyway, now the work began. We had to get Nick and that motorcycle back up that hill! It was fine. Hard, but fine. Anything would have been worth those moments that we got to experience. We did this so many times over the next couple of years, until, like I said, the motorcycle literally bottomed out. It honestly came apart piece by piece over time and finally the whole frame was sitting on the ground!

Before kindergarten, Nick Phillips was a funny, happy child. He loved to jump off the couch or bed and land in splits, loved trucks and trains, and could play in the dirt or rocks all day long.

Then, in kindergarten, his handwriting suddenly worsened. One day he lost his balance, and after that everything worsened daily. Seven agony-filled weeks later, the horrific diagnosis came: adrenoleukodystrophy. The name for the disease is an ugly word, but the illness itself is a million times uglier.

I Love Him More tells Nick’s story and that of his family—a tale of hope, peace, perseverance, and ultimate victory. It follows him from the beginning, through his diagnosis and life with the disease to his passing at the age of twenty-three. This personal narrative and testimony shares a young man’s love for his family and his Heavenly Father, his family’s love for him, and God’s love for them all and for all of you. If you are suffering, you can find encouragement and warmth in the love presented here and know that you are never alone in this life.

Valerie Phillips is a Christian wife and mother who loves laughing, waterfalls, sitting on her back porch watching birds, and reading her Bible.