The Sheep and the Shadows 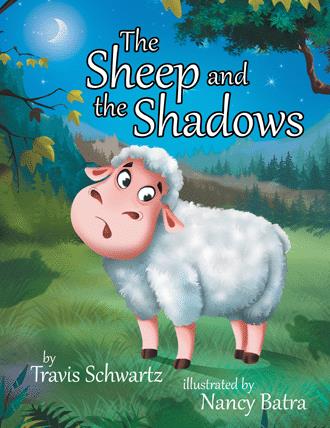 One little sheep saw a shadow one day

that spooked him so much that he ran far away.

The shepherd yelled out, but the sheep didn't hear.

He kept running and running with a heart full of fear.

He zipped around bushes 'til he was way out of sight.

"Whew!" said the sheep. "That shadow was a fright!"

Then he walked and he walked further away from home.

That's when he realized he was lost and completely alone.

"Baa! Baa!" cried the sheep, as he trembled to say,

Suddenly he saw a shadow and heard a strange buzzing sound.

So he closed his eyes tight and fell straight to the ground.

"Nothing more than a harmless dragonfly.”

"Whew!" said the sheep. "I thought you were something else.

It's so good to know I'm not alone here by myself.”

The two of them ventured for hours that day

but then something moved that made the dragonfly whisk away.

The sheep saw a shadow and heard a strange croaking sound.

So he closed his eyes tight and fell straight to the ground.

This is a story about a little sheep who’s afraid of shadows. He sees a shadow one day and runs away from the shepherd, getting lost in the woods and surrounded by shadows! Every shadow that he sees ends up being something he shouldn’t be afraid of. But later the shadows come from things that are frightening, especially for a sheep. This story is inspired by Psalm 23 and the Lost Sheep parable told by Jesus in Luke 15. The sheep in the story is like us in many ways, and we need to know we have a Shepherd we can run to when we are afraid. Will the shepherd find his lost sheep in time? Find out in The Sheep and the Shadows.

Travis Schwartz is a Children’s Author, Christian Speaker, and Balloon Artist known as Balloon Dude Travis. He always loved writing stories ever since he was a kid, and published his first book in 2011 entitled, ‘A Twisted Adventure in Twistytown.’ Travis continues to use his gifts and talents for the Kingdom of God, directing his readers to Jesus, the Good Shepherd.