DO NICE GUYS RUN FOR CONGRESS?

How an Obscure, Country Lawyer Kept his Faith, Beat the Establishment, and Survived Twenty Years in Congress 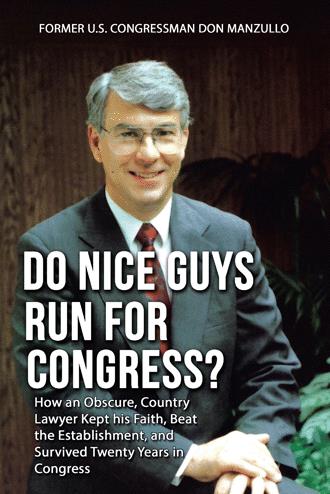 I chose the title—Do Nice Guys Run for Congress?—because when I announced I was a candidate for Congress, I was repeatedly asked, “Why is a nice guy like you running for Congress?” The question reflects the cynicism of the American people and the hole into which Congress has dug itself.

I hesitated to write the book because I have struggled mightily in my walk of faith and have not always projected an image of a person of faith. I am a work in progress with many flaws. I do pray for a longer fuse and greater diplomatic skills, among other needs. I have had my disagreements with fellow Members of Congress, bureaucrats, an ambassador and others, and I have learned it is noble to seek and to bestow forgiveness.

The book is about the difficulty of an “outsider” like me battling the “Establishment.” I had no money, no name recognition, no prior experience in office, and was sued by my own party to keep me off the ballot. The party leaders must have mused, “Who is this obscure, country lawyer who has the temerity to run for Congress against our party-chosen candidate?” The Manzullo team of untested and underpaid staff pulled off two of the biggest upsets in the election season by winning the primary and then by unseating an incumbent in the general.

And there I was—a Member of Congress who had one clear mission: to work for my constituents, be true to my values and faith, work with my colleagues from both sides of the aisle, and live up to the oath that I took to uphold the U.S. Constitution.

This book captures my reflections of twenty years of public service in the U.S. House of Representatives, gleaned from my personal journal, notes and archived bankers’ boxes. I want to encourage future generations to become involved in the Great Experiment of America, especially in this age where polls show a steady decline of Americans having confidence in democracy.

We face a crisis in Congress, where hyper-partisanship supersedes rationality and where too often it is more important to grandstand and name call than create a dialog with those of opposite views. However, I went against that acrimony and became known as a Member of Congress who developed a reputation for building bipartisan coalitions and changing laws, complex regulations and government policies.

The reader will see scores of behind-the-scenes stories involving, to name a few, international trade, manufacturing, the environment, foreign policy, saving small businesses, national security, protecting children, and battling for constituents impacted by the federal government. A Member of Congress requires a heavy dose of elbow-grease, persistence, persuasion and compromise, which makes the reader exclaim, “Wow! I didn’t know that!”

It is a must-read for those interested in history, politics, running for office, the congressional process, how public policy is made, and how real-life events influence the minds of leaders.

With a great history of leadership and ingenuity, Manzullo is truly a political inventor….You the reader can see how a variety of experiences can launch you to a new adventure. You get real insight from the book about congressional personalities—though Don’s book, as in life—is kind and generous….You can hear him talking as you read his book. His humor and faith move it right along.

Watch for Don’s “Mad Board” where he posted aggravating government actions or positions—a great idea, in fact a gem to be copied! We each would have a better life if everyone posted what we are mad about on a cork board until we could think of a constructive way to make it change. Don’s statement that in Congress, “We talk more but communicate less” should be required to be printed on everyone’s shirtsleeve.

A country lawyer in northern Illinois, Don Manzullo ran for Congress, was sued by his Republican party to keep him off the ballot, but persevered to beat the established politicians.

In a fascinating and at times humorous account of his twenty years in Congress, he leads readers through battles involving trade, national security, manufacturing, protecting small businesspeople and children. He describes his journeys to foreign countries and meeting with the president of China. He blows through diplomatic channels to meet with Prime Minister Netanyahu on a volatile trade issue involving a constituent.

Those interested in history, politics, the congressional process, the role of faith in a legislator’s life, and overcoming a serious reading and retention challenge, will find Manzullo’s legacy as a problem solver a must-read. Once readers start, they will not be able to put it down.

Don Manzullo served twenty years in Congress, representing the 16th District of Illinois. He chaired the Small Business Committee and the Foreign Affairs Subcommittee on Asia and the Pacific, and he served on the Financial Services Committee during the 2008 crash. He was a commissioner on the Congressional-Executive Commission on China. He was a participant in inter parliamentary exchanges involving China (chair), Canada (chair), Japan, S. Korea, Mexico and EU. He received the Aerospace Institute of America’s Wings of Liberty Award for changing complex regulations, resulting in billions of dollars in additional export revenues for U.S. manufacturers. He remains active in the Christian Embassy ministry on Capitol Hill.

Before Congress, he practiced law for twenty-two years. After Congress he became the President/CEO of Korea Economic Institute of America. He is a graduate of American University, Washington, D.C., Marquette University School of Law, and has an honorary Juris Doctor from Inha University, S. Korea. He is an adjunct instructor at Rockford University in political science, foreign affairs, and constitutional law.