God Told Me No!

A true story about how a victim survived overwhelming adversities, total paralysis, and death. 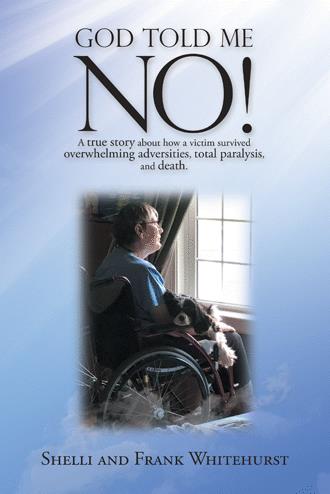 How much negativity have you experienced? Imagine you are totally paralyzed and dependent on a ventilator and feeding tube to keep you alive. Think about it. You cannot move. Air is being pushed into your lungs by a machine at a specified rate. What would you do? How would you react and endure this circumstance? Suppose you cry, but you cannot wipe away the tears. If you have not experienced a horrific situation like this, it will be difficult to understand exactly how someone feels. However, ponder yourself in this situation. Later I will identify the twelve factors that helped me heal, with an additional twelve factors specifically for caregivers to nurture healing.

In my case, in a matter of a few days I was faced with numerous adversities, including total paralysis and death. Although I was surprised at these events, I was extremely saddened that during this horrific time, God told me No! Nevertheless, I trusted God’s plan, and held on to my faith. Although I did not know God’s will, I was about to learn exactly what God wanted me to do.

I went back to visit the critical-care hospital where I was an inpatient for five and a half months. It was extremely emotional for everyone, and the staff was crying. These folks literally saved my life many times. One thing that I cannot get out of my head is when the doctor said that he had two West Nile Virus patients, and he was one for two. Then he thanked me! I must have had an odd look on my face because he explained that I lived and the other did not. I had not known of the other patient’s passing until that moment. Thank you, God, that this good doctor did not give up on me. It was so good to see these people.

I apologized to my nutritionist for giving her such a hard time about feeding me too much. And I thanked her for doing it. With the feeding tube, the food just kept coming, twenty-four hours a day. It never stopped, and it hurt so much. My stomach was huge, and I was perpetually nauseated. Not to mention what happens on the other end! I think we can leave it at liquid in, liquid out.

I used to beg her to stop the food. One day she said she understood. I got angry and kept shaking my head no. She very compassionately explained that I needed the energy to get better, that muscle is the first thing to be used up when you are sick and cannot move. I was like, yeah, who cares about that? She explained that your heart is a muscle, and they were trying to protect my heart by giving me enough energy through the tube feed.

That stopped my ranting. Touché. Yes, OK, bring on the liquid diet. I thought about that conversation often over the next year as the West Nile polio slowly ate away at my muscles. Whenever I did not want to eat, I forced just one more bite. It was these medical professionals who revived me. They said that I was nonresponsive, but for me, it was enlightening.

I was free. I could move again! What is that smell? This is absolutely beautiful! Hmm. “La, la, la, la, la,” I was singing along. How do they make such beautiful sounds? The harmony is so pitch-perfect. I knew just the right notes to hum. The colors are so bright. I was moving forward. I was not afraid. I wanted to go faster, but I knew there was plenty of time.

I wish they would stop, I thought. I know they are calling me, but don’t they know that is not my real name?

Arrgh! I was so annoyed! They were keeping me from going. I turned my head a little to the left and said, “Someone tell her it’s in the closet.” There, maybe that will satisfy her. I had no idea what exactly was in the closet.

As I turned my head back to the front and started to move forward again,

The words came from everywhere—left, right, up, down, inside, and outside my body. They were not overly loud or forceful, but they were law.

What? Wait. No, no, no! Humph. My whole chest and middle caved in with a giant shove that pushed me backward. I was falling and slammed down on my back. I could not breathe. I could not move. Oh, God! Not again!

Oh, if that stupid person would just shut up!

I snapped my eyes open, thinking I would express my disapproval and ask them to stop screaming my name. But only my eyelids moved. I was trapped! As soon as I opened my eyes, I was nose to nose with a very pretty lady. She was opening her mouth to scream my name again, but when she noticed my eyes were open, she was startled and stared at me for a long moment. Then she smiled so big. I felt such relief and was not angry anymore. I smiled back. Well, I tried, but my face was not responding, and it felt like I was grimacing. I thought, Oh, God, why did you make me come back to this?

Maybe I should back up and explain how I had the opportunity to be in the presence of my Lord God twice in one week. This was not the first or the last time God has talked to me.

This inspiring and emotional journey takes you down the path of a victim who faced numerous adversities, total paralysis, and death. Even so, during this horrific time, God told her no! This is a story about spiritual warfare, victorious courage, and unrelenting attacks that seem insurmountable. Although surrounded by overwhelming adversity, the victim was comforted by enlightening signs and miracles that overshadow the desolate atmosphere.
This tragic story incrementally evolves into an account of faith that never wavered, hope that never faded, and the everlasting support, love, and devotion that helps healing. Most compelling is how God steps in with perfect timing that energizes, rejuvenates, and strengthens faith. This perfect timing is interlinked to occurrences that authenticate and form milestones of faith. Reflection on these events reveals joy may be best experienced with the presence of God during tribulation and affliction.
The book identifies tools for surviving attacks, and for winning a spiritual battle; such as, the useful Twelve Factors for Successful Healing and the Twelve Factors for Caregiver Success identified by the authors.
Comments taken from readers in a presale book viewing were: (1) “Your book is one of hope and miracles.” (2) “It made me feel like anything is possible.” (3) “I cried happy tears.” and (4) “This is a must-read for everyone facing major issues in their life.”

Shelli Whitehurst has 27 years tenure teaching science. She holds a Master’s degree in environmental science, and secondary administration and supervision.
Frank Whitehurst has 30 years tenure in the criminal justice system. He holds several degrees including a PhD. During his 16 years tenure in higher learning, he has served as an assistant professor, college chair, and program director and developer.
Frank and Shelli have both published in scholarly and professional journals. Frank and Shelli live in Powhatan, Virginia.