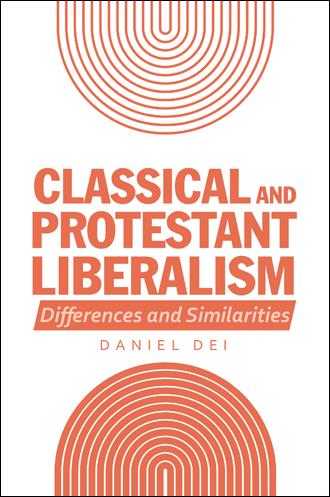 The book outlines the beginnings of classical liberalism, compares it with Protestant liberalism, and highlights similarities and differences between classical liberalism and Protestant liberalism. With its focus on liberty, classical liberalism follows from the chain of thought that upheld moral individualism in the face of totalitarianism, monarchism, or despotism. Renaissance Humanism and significant political and economic landmarks of Western societies shaped classical liberal thoughts from the seventeenth century through the twentieth century. Mercantilism, English Civil Wars (1642-1651), the Glorious Revolution (1688), the American Revolution (1775-1783), and the French Revolution (1789) are among those significant events that impacted Western societies during those centuries. In the period under review, classical liberal ideas found expression in the thoughts and publications of notable individuals. Among these were Thomas Hobbes, John Locke, Baron de Montesquieu, Voltaire, Jean-Jacques Rousseau, Adam Smith, John Stuart Mill, John Rawls, and Milton Friedman. Classical liberalism manifests in three main strands. These are libertarianism, anarchism, and social liberalism. Generally, classical liberalism thrives on some foundational philosophies, including erosion of traditional assumptions, social contract, individualism, liberal pluralism, limitations on the power of the government, a market economy, and utilitarian ethical foundations. Significant social, economic, and political changes in the late eighteenth century caused a major shift in the intellectual world. A marked characteristic was the shift from reason to a way of perceiving that placed optimism and capabilities in human beings at its core. The focus on humanity implied that all phenomena that could not be related to the human experience faced the threat of insignificance. With its transcendental focus and deep roots in church traditions, Christianity had to be reconstructed to continue to appeal to the modern individual’s sense. In an attempt to do this, early exponents of Protestant liberalism sought new ways of making the elements of the Christian religion meaningful. They reconciled Christian beliefs with the popular way of perceiving reality. Consequently, Protestant liberals generated sets of philosophical ideas that directed their perspectives on core Christian doctrines. Among these were the immanence of God; anthropocentrism; focus on Jesus as an ethical example; and evolutionary view of the Bible; philosophical optimism; salvation; the church as an instrument of social progress; the kingdom of God as immanent reality; religious authority; continuity; modernism; and reduction of Christianity to its unchanging essence. While it is difficult to specify how each of these philosophical ideas was stressed among the various strands of Protestant liberalism, the listed philosophical ideas are common to most of them. Regardless of the emphasis, Protestant liberalism has reconstructed Christian religious beliefs in a way that sharply deviates from the conventional Christian understanding of the core doctrines of the Christian faith. A comparison between classical liberalism and Protestant liberalism indicates that both were influenced by liberal notions such as natural rights, social contract, individualism, pluralism, secularization, and utilitarianism. Nevertheless, sharp divergence can be observed from these same liberal notions.

Dr. Daniel Dei holds a B. A. (Theological Studies); GradDip. (Legal Studies); MA and MPhil (Religion & Human Values); MPhil (Guidance & Counseling); P.E.M. (ADR); PhD (Ethics); and PhD (Guidance & Counseling Psychology). His Postdoctoral Fellowship is in Ethics and Missions. He is an ordained Pastor, University Professor, and Researcher. He is also a dynamic speaker who has built a realistic platform on the back of more than fifteen years of pastoral and teaching ministry. He is interested in issues that relate to ethics, practical theology, and counseling. He has over 30 articles and chapters in refereed Journals and edited books.