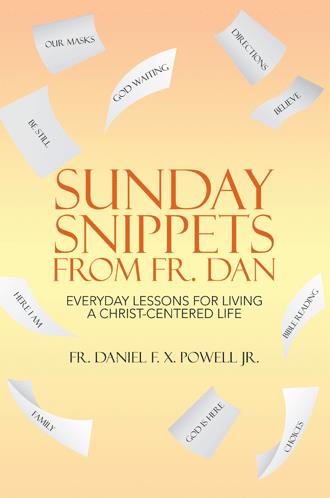 The first part of the Gospel tonight is all about the steward and nobody else. It was all about him. The steward complained because he was about to lose his job and he was concerned that he was going to have to go out and beg for money. So, he decided he was going to take care of himself by cheating his master. He was going to make sure all his needs were satisfied! Then, what is the master to do? “…the master commended that dishonest steward for acting prudently.” You see, the master, too, was focused on this world.

On Thursday, June 21, 2016, our Catholic parish of St. John Neumann, Lancaster, PA started a transformation when Fr. Daniel F. X. Powell, Jr. became our pastor. What was most impressive were his Sunday homilies—sermons that explain the Bible readings at Mass. He often suggested we look inside ourselves and meet the Lord to enrich our spirituality. It was also apparent his suggestions could be a meditative guide in prayer for any Christian denomination, but especially for Catholic Eucharistic Adoration. Therefore, the Bible passages that Fr. Dan is referencing, are also included in this book.

At Fr. Dan’s request, funds earned from the publishing of this book, will be donated to St. John Neumann’s sister parish in El Factor, Dominican Republic, St. Francis of Assisi, a poor church and school that he has visited for over 20 years!

Rev. Daniel F. X. Powell, Jr. was born in Philadelphia and moved to King of Prussia, PA when he was eight years old. He attended St. Raymond and Mother of Divine Providence Catholic elementary schools and Archbishop John Carroll High School. He subsequently graduated from Shippensburg University. He entered Mary Immaculate Seminary in Northampton, PA in August, 1986 and then St. Vincent Seminary in Latrobe, PA. He was ordained to the priesthood on May 30, 1992.

In his priesthood, Fr. Dan was assigned to several parishes and also served as campus minister at Millersville University and Franklin and Marshall College and Susquehanna University where he honed his skills working with youth. He is a strong proponent of Catholic education and, most recently, was involved in relocating a Catholic Elementary School from the city of Lancaster to the Lancaster suburban parish of St. John Neumann where he now serves as Pastor. For his tireless work on this relocation and the establishment of this school, he was recently awarded a 2021 National Catholic Education Association Lead, Learn, Proclaim Award. This award recognizes outstanding efforts, contributions, and achievements on behalf of Catholic school education. The completion of this Religious Education Center took place during the Covid Pandemic—God’s Hand at work.

Fr. Dan has been taking mission trips to the Dominican Republic for the last twenty years where he has established relationships with many people in the town of El Factor. He loves that he has been able to facilitate a mission experience to so many who have accompanied him over the years.

For relaxation, Fr. Dan and his Boston terrier, Maggie, like to hike in the State Parks of PA. He also enjoys relaxing at the beach, kayaking, biking, and skiing.