Why America Needs to Repent

For the Kingdom of God is at Hand 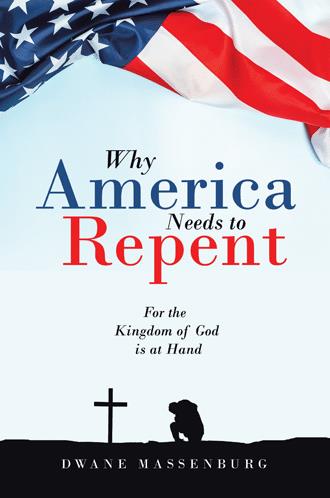 Let’s go back in time. Imagine we are living in year thirty-one (or whenever Jesus was just starting His ministry), in the city of Jerusalem. Dirt houses, camels, and desert sand are the norm. There are no sports, movies, soap operas or game shows to watch on television. In fact, there is no such thing as a television. Life is lived without paved roads, vehicles, electricity, sewing machines, printed books, inside plumbing, books, telephones, radios, computers, dentists, doctors’ offices or, hospitals. Go back to a time when there was no 911 emergency number, or fireman, or airplanes. Much of the history we are aware of has not even entered anyone’s mind. Now, imagine that Jesus Christ is giving his “Sermon on the Mount”, (Matthew 5-7), and he was already correcting many of the thoughts and habits of the people of the day. You heard, “this” but, I say “that”. Humanity was already off track in their beliefs about major fundamental aspects of life.

Now fast forward to our American culture today. The hustle and bustle of our daily lives; getting here and there to this appointment and that appointment is mind boggling. Making sure we see a certain thing on television broadcast from hundreds of miles away is a priority. Stopping by the store or fast-food restaurant to pick up dinner while making a cell phone call to an aunt that lives two states away seems normal. Life is very different than it was in the year thirty-one.

Now compare the two paragraphs. Technology has changed but we are still primarily the same human beings that could have lived three centuries ago. The earth is still the basically the same. Yes, technology, communication and the speed of travel have changed but, our relationship and relativity to God and the universe has not changed. Looking through the eyes of God it is easy to see how far we are from what he intended. This book goes back and looks at how God’s word would apply if it were delivered at the “Sermon on the Mount”, today, on the steps of the Lincoln Monument. How would He make it clear that we are not doing what the Bible says we should be doing? I am sure that one of the things He would start with is, “Repent.” What does that mean? Be more specific God. What do we need to repent for? That is the question this book answers. This book is designed to start the conversation on several specific topics that according to the Bible, we need to change in our culture.

The United States of America has grown into a great and powerful country; especially prominent since the twentieth century began. Industrialization and two World Wars positioned America to be a force throughout the world. Now, in the twenty first century, even though the world is changing quickly America is still thought of by many around the world as the most powerful; economically and militarily. However, if American “might”, has been our strength, it may also be a part of our spiritual weakness. Biblically, throughout history, there is a pattern of people being blessed by God and then forgetting about God.

Blessed by God Forgot about God

Adam and Eve in the Garden of Eden They chose to disobey God and listened to Satan through a serpent. (Genesis 2-3).

Hebrews They decided being led by God was not good enough so they wanted a King like other nations. (1 Samuel 8).

Northern and Southern Kingdoms after Solomon’s death They disobeyed God and both kingdoms were taken into captivity. (2 Kings 15-25).

Followers of Jesus Many turned away after Jesus confronted them with being the Son of God. (Matthew 6:65-68).

Nothing starts until you repent

Nothing starts until you repent. Doing things in order matters. Like eating a plain hot dog and then eating a spoon full of mustard. You did not have a hot dog “with” mustard. You had a hot dog “and” mustard. A hot dog with mustard is heavenly, the band plays, the birds sing and everything is right in the world. On the other hand, a hot dog “and” mustard eaten separately is not complete and could be considered “yucky” as my four-year-old granddaughter says. Of course, repentance is much more serious than mustard on a hot dog and this example is not meant to trivialize it. This example is only proposed to point out that some things need to happen in order. There are some things that should be done first, and then second and so on. In other words, apply the mustard first, then eat the hot dog. Likewise, in God’s world repentance comes first. Repent to God first, then grow your relationship with Him. One must accept the fact that a breech has been made in our relationship with God. God demonstrates this example by sending John the Baptist to preach repentance prior to Jesus showing up on the scene.

6Therefore say to the house of Israel, thus says the Lord God: “Repent, turn away from your idols, and turn your faces away from all your abominations. 7For anyone of the house of Israel, or of the strangers who dwell in Israel, who separates himself from Me and sets up his idols in his heart, and puts before him what causes him to stumble into iniquity, then comes to a prophet to inquire of him concerning Me, I the Lord will answer him by Myself. 8I will set My face against that man and make him a sign and a proverb, and I will cut him off from the midst of My people. Then you shall know that I am the Lord.” (Ezekiel 14:6-8).

America needs to repent for the kingdom of God is at hand. This is a bold statement when the United States is considered to be the most powerful nation on Earth. Should we repent individually or collectively?

In Why America Needs to Repent, author Pastor Dwane Massenburg explores the subject of repentance in today’s world, considering what repentance means and the pressing reasons why America should repent. He addresses a host of related questions:

• How do we grapple with America being a predominately Christian nation in the twenty-first century?

• Are Christians allowed to be different now?

• Has God changed his mind about what it means to be a Christian?

• How should we act as Christians today?