A Fresh Look at the Great Commission 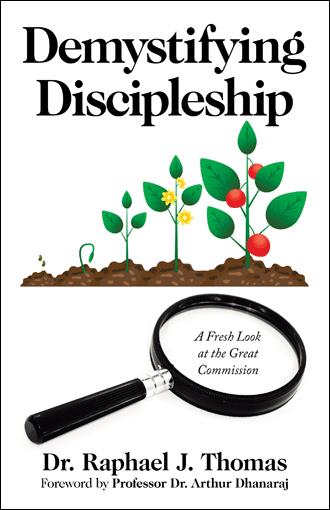 This material is not primarily a theological treatise on the great commission although it is committed to sound biblical exegesis and exposition. It is primarily an inspirational and practical tool to enhance the task of making disciples of Jesus Christ among individual believers, churches, and para-church ministries.

It is my prayer that all who use this material will develop a passion for discipleship that is contagious, somewhat like the COVID-19, except that it will bring new life instead of death. Please join me in prayer that the Lord will raise up many to bring in the harvest for “the harvest is plentiful, but the labours are few.” Discipleship begins with prayer. Jesus makes this clear in Matthew 9:35-38

35 Then Jesus went about all the cities and villages, teaching in their synagogues, preaching the gospel of the kingdom, and healing every sickness and every disease among the people. 36 But when He saw the multitudes, He was moved with compassion for them, because they were weary and scattered, like sheep having no shepherd. 37 Then He said to His disciples, “The harvest truly is plentiful, but the laborers are few. 38 Therefore pray the Lord of the harvest to send out laborers into His harvest.”

Let us hear and heed the word of Jesus again as recorded by the apostle John:
35 Do you not say, ‘There are still four months and then comes the harvest’? Behold, I say to you, lift up your eyes and look at the fields, for they are already white for harvest! 36 And he who reaps receives wages, and gathers fruit for eternal life, that both he who sows and he who reaps may rejoice together. 37 For in this the saying is true: ‘One sows and another reaps.’ 38 I sent you to reap that for which you have not labored; others have labored, and you have entered into their labors.” (John 4:35-38).

As the end of time approaches, we need to redouble our effort to respond to the Lord’s command to make disciples of all nations. Fueling the fire for passionate and consistent discipleship, this study provides an exposition of the Great Commission and practical insights to participate in its fulfilment.

“… What I really appreciate about Dr. Thomas’s approach is that the scope of the content is full and the reader is led step by step from beginning to end. One of the elements that delivers a connective thread is the arrangement and articulation of the chapters. The sections are thoughtful and smart and give an overarching succession that paints a bigger picture that is vital for the topic of discipleship. …”
—Dr. Steve McCoy, lead Pastor of the 360 Church,
Sarasota, Florida, and founder of SMALLCIRCLE

“This volume is about simplifying our understanding of Christian discipleship. Utilizing sound hermeneutical skills, Dr. Raphael Thomas carefully exegetes the critical biblical texts to establish the need for a shift in our thinking. This refreshing perspective on Discipleship is a must-read for astute Christians and scholars.”
—Dr. David Corbin, former President of the
Caribbean Graduate School of Theology

“Demystifying Discipleship” is a passionate and urgent call to all Christians to engage in our primary mission of making disciples. Dr. Thomas’ passion and experience in making disciples can be felt on every page, and not only inspires readers to get into action, but also provides them with practical steps to become effective disciple-makers.

Dr. Raphael Thomas is the president of Blessing Basket International, a missions organization that he cofounded with his wife, Velda, in 2017. He also currently serves as director of missions and evangelism at the Germantown Christian Assembly, Philadelphia.
Dr. Thomas and his wife served the Lord in Jamaica for over thirty years in full-time Christian ministry before they relocated to the United States in 2020. Dr. Thomas served as pastor of the Annotto Bay Gospel Chapel, St. Mary, Jamaica, for thirty-two years. He also served as chairman of the Gospel Chapel Education Centre, which he was instrumental in founding in 1990. He is a former chairman and executive director of the North-Eastern Missionary Conference, a fellowship of thirty-three Christian Brethren Assemblies in Jamaica. Raphael continues to serve on various boards in Jamaica, including Gospel Chapel Education Centre, Midland Bible Institute, Choose Life International, and North-Eastern Missionary Conference.
Raphael holds a doctor of ministry from Columbia Theological Seminary, a doctor of clinical Christian counseling from Central Christian University, a master of arts from the Caribbean Graduate School of Theology, a bachelor of arts in theology from the Jamaica Theological Seminary, a diploma in teaching from the University of the West Indies (through Shortwood Teachers’ College), and he is also a graduate of Haggai Institute (now Haggai International), of which he now serves as an international facilitator.
Dr. Thomas has been an Adjunct Lecturer at the Caribbean Graduate School of Theology since 2001 where he taught the courses Caribbean Evangelism, Dynamics of Church Growth, Biblical and Theological Themes in Counseling, Theology of Missions, Latter Prophets and Writings, Pentateuch and Former Prophets, Pastoral Care and Counseling and Biblical and Theological Themes in Counseling.
Raphael has a passion for preaching and teaching the Word of God. He has spoken at Evangelistic Crusades, Bible Conventions, Christian Camps, and Mission Conferences. He carries a burden for Global Evangelization.
In 2003 he was certified as a behavioral consultant with the Institute for Motivational Living. He is a licensed clinical pastoral counselor with the National Christian Counselors Association. In 2017 he received a National Award from the Prime Minister of Jamaica for his contribution to education.
In 1984, while he was still a teenager, Raphael was named the Year of the Bible Personality for emerging as the champion in the Jamaica Youth for Christ Year of the Bible Competition. In that competition, Raphael memorized and recited eleven hundred verses of scripture (one-eighth of the New Testament) and won a trip to Israel and Jordan.
On many occasions, Raphael has fasted for revival, sometimes for periods lasting forty days. He shares this passion for revival in his book Biblical Dynamics for Revival Today: Studies in the Life of King Hezekiah.
In 1992, Raphael and his wife were commended to the work of the Lord by the Annotto Bay Gospel Chapel in association with the North-Eastern Missionary Conference, a regional body of the Christian Brethren Assemblies Jamaica (CBAJ). Their commendation statues were endorsed by the Germantown Christian Assembly (GCA) in 2020, thus recognizing them as missionaries in North-America as well, where they serve with GCA and Blessing Basket International to share the gospel locally and globally. They have two adult sons, Timothy and Nathanael, both of whom are actively engaged in Christian ministry.