A Tribute to the Heroes of Cross-Functional Team Manbij: A Soldier’s Memoir 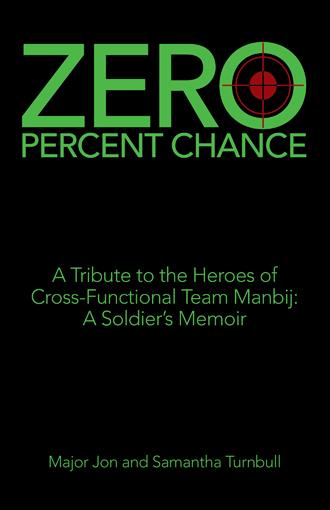 Chapter 1
Let’s Do This
Commit your work to the Lord, and your plans will be established.
—Proverbs 16:3

An American special operations team leads the fight to remove ISIS from Manbij and the surrounding region in Syria in this account told through the eyes of Army Capt. Jonathan Turnbull.

After multiple heroic operations, returning electricity to 400,000 civilians, and helping thousands of girls return to school, ISIS did everything it could to thwart the offensive. Turnbull is injured in a suicide bombing and given no chance of surviving.

When Samantha met the lead trauma surgeon overseas, she found out her husband had lost his right eye, had no skin or tissue on the right side of his face, had multiple skull fractures, and numerous other injuries. They told her he’d likely be paralyzed on one side and may not remember much of anything, including her and their son.

The couple was finally reunited, but it was not the meeting either had planned for—and it was the hardest thing in the world. Samantha was happy to see him alive but heartbroken to see him in such a condition.

Find out how God stepped in to work miracles in the life of a soldier who was given a zero percent chance of surviving in this book that celebrates freedom, faith, and heroes.

Major Jonathan Turnbull is a 2010 graduate of the United States Military Academy at West Point. During his numerous deployments, he has fought for freedom with unconventional military methods. He continues to train, motivate, and inspire those around him through witty humor, and a candid positive outlook on life.

Samantha Turnbull is Jons wife, full-time caregiver, and mother to their two sons. She has been by Jon’s side since high school, including his time at West Point, and throughout his many deployments supporting him in all his accomplishments.