Finding Masculine Courage in a Stand Down World

by Shawn Brower With Josh Brower, Foreword by Patrick Morley 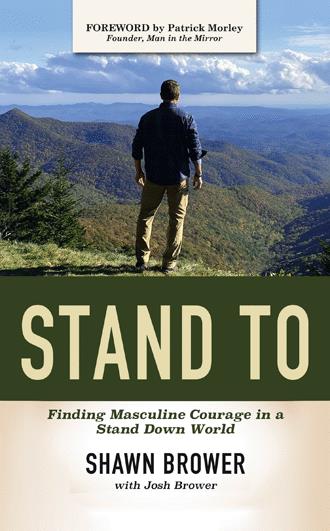 “Courage is not simply one of the virtues, but the form of every virtue at the testing point.” - C.S. Lewis

William Wallace (Braveheart), Jason Bourne, Aaragorn (Lord of the Rings), members from Seal Team Six, and King David’s Mighty Men could all provide great examples of performing incredible feats requiring masculine courage. However, to provide such examples from men as these could quickly discourage us from ever being able to measure up to such courageous men…whether real or fictional. So, let me encourage your masculine heart to act with courage by offering an example from the life of a 7th grade boy.

Courage From My Son

In this simple and yet courageous act, my 7th grade son just answered the big life question as to whether he was becoming a man living out his God-designed maleness with courage or suppress his unique design given by God? I know this sounds like I put my son in a box with these two distinct categories but here’s the distinction. A coward is a man who knows the right thing to do but allows fear to keep him from doing it. The courageous man knows the right thing to do, is equally fearful, yet does it anyway. Acting in the face of fear is courage. Choosing not to act in the face of fear is the mark of a coward. Notice that fear is present in both choices. It is why the show Fear Factor that aired years ago was something that caught so many people’s attention, because every challenge gripped contestants and onlookers alike with great fear. The question was whether they could overcome that fear.

It is important to point out that every action we take is not necessarily courageous. Some actions that appear courageous are purely stupid and reckless. Here is the difference. Courageous action is taken as a matter of principle and heart-level conviction. It is usually predictable and pre-determined because it comes from a place of one’s personally held belief system. The greatest example ever was Jesus going to the cross. In the Garden of Gethsemane, the Bible notes that He experienced what we know today as a rare condition called hematidrosis that is brought on by the most extreme levels of fear and anxiety as he “sweat great drops of blood” at the thought of his flesh being ripped from his bones during His scourging and the nails being driven through his hands and the spear being rammed through His side! The anticipation and level of anxiety was so mind-blowing that He even asked his Father if He would relent and not make Him go through with the never-before task of dying on a cross and taking on the sins of the world. It was just so much to anticipate! Being fully man as well, we get that, right? There were no hands raised or waiting lines for that job! And yet, as we know, Jesus walked right into the biggest mess--the world’s greatest challenge--and He conquered death and the grave, the greatest victory known to the natural and supernatural world!

What do we learn from Jesus in this? It is not that he had eliminated fear, for if fear did not exist, there would be no need for courage! What we see is a deliberate and intentional CHOICE to ACT. It was a surrender and dying to one’s self for the benefit of others! Wait! Come on! There’s got to be some special formula to being courageous! You are right - here it is...

Courage Words From A King

Here is the reality! The much sought after answer to true masculine courage has been right before us for centuries. However, if we have been looking to someone or something to define it for us other than God and His Word, we have been searching in all the wrong places. We see this come into full view when King David, a fighter, a man of war, a man after God’s own heart, a warrior king who is looking to pass his kingship on to his son. Before he dies, he calls Solomon to his side and deliberately tells him, “Be strong, and show yourself a man, and keep the charge of the Lord your God, walking in His ways and keeping His statutes, His commands, His rules, and His testimonies…that you may prosper in all that you do and where you turn.” (I. Kings 2:2-3) Six times King David directs his son Solomon toward God. David did not stop after “Be strong and show yourself a man” because that would have left us wondering what that exactly might look like. Instead, he offers clear, definitive action points for his son to follow. Keep or hold on to God’s charge, ways, statutes, commands, rules, and testimonies, and then walk - walk in those ways and not others. In other words, act on the knowledge and the wisdom given to you from God. There it is! In order to act courageously, it will require movement out of you. You must move forward, make an advance, and step up. To act and move courageously is to believe in the depths of your being, with great conviction that something must happen even though fear is telling you to remain in the shadows a bit longer!

Like a soldier awake, alert, ready for action as he responds to the STAND TO call knowing every moment is critical and his engagement is a necessity, so every man must know that he too is being counted on to courageously follow God’s specifically designed purpose and plan for his life. Men are hardwired for action, and we learn best by doing.

STAND TO invites men to accept personal challenges and live intentional, creed-driven lives in the presence of God (Coram-Deo), under His authority, and for His glory! Too often, silence, apathy, hesitation, or withdrawal from worthy engagements cause a man’s true identity and strength to be suppressed. STAND TO flips this narrative!

STAND TO shares from God’s Word our striking resemblance to our Warrior King who has also experienced intense suffering from missional living. This King offers backbone-stiffening courage in the face of fear, strength without compromise, and the model for sacrificial living despite the cost. Knowing our King goes before us in the battles and challenges enables us to confront and overcome them as well. Each chapter provides men specific ‘courage challenges’ to DO. This is critical! Soldiers in battle are trained and equipped to courageously engage in the good conflict and move towards the action. Such present and engaged men are needed in their relationships and their significant calling from God. In the words of Thomas Jefferson, “Do you want to know who you are? Don’t ask. Act! Action will delineate and define you!”

STAND TO IS GOING TO LIGHT YOUR HAIR ON FIRE! This incredibly interesting and readable book is destined to reach a whole new generation of men who want their lives to count and make a difference. It’s that good!

For years, Shawn has been training boys to be men, and this book proves he’s the kind of guide we need right now.

—JOHN STONESTREET, President of the Colson Center for Christian Worldview and host of Breakpoint

Men who would “stand up for Christ” and “stand firm in Christ” would benefit from being saturated in Dr. Brower’s volume STAND TO - a weighty yet engaging exposition of Christ-exhalting Biblical masculinity. Enjoy and profit!

It’s time men of God need to stand up not down. Shawn Brower points to God’s standard of masculinity and invites men to embrace who God designed us to be.

—RICK BURGESS, Co Host of the Rick and Bubba Show and Director of TheManChurch.com

This book helps men, young and old, to courageously pursue, accept, and act on God’s masculine design, to image Jesus...A must read for every man.

Stand To was a hallmark of hope and heaven-sent pushing and probing. I am drawing upon its resources multiple times in a week and sometimes in a day.

Shawn Brower and his wife reside in Birmingham, Alabama, where he serves as the head of Upper School and the varsity men’s soccer coach at Briarwood Christian School. He has earned five state championships and three national Coach of the Year awards. Dr. Brower has also published We Became Men: The Journey into Manhood and The Huddle: Becoming a Champion for Life. He and his wife are blessed with three sons.