Faithful Presence in the Secular Academy 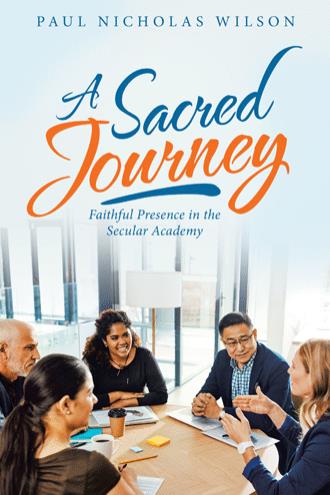 Scripture does not divide existence into separate natural and supernatural, or material and spiritual realms. The separation that the modern world tends to make is utterly foreign to the biblical worldview. It is doubtful that the people of the Bible could even have wrapped their heads around the way we tend to see our lives and the world now.

“So here’s what I want you to do, God helping you: Take your everyday, ordinary life—your sleeping, eating, going-to-work, and walking-around life—and place it before God as an offering. Embracing what God does for you is the best thing you can do for him. Don’t become so well adjusted to your culture that you fit into it without even thinking. Instead, fix your attention on God. You’ll be changed from the inside out. Readily recognize what he wants from you, and quickly respond to it. Unlike the culture around you, always dragging you down to its level of immaturity, God brings the best out of you, develops well-formed maturity in you.”

A shelf in my closet is stacked with hats. I have yard-work hats, driving hats, leisure hats, fishing hats, golf hats, sport fan hats, hot weather hats, cold weather hats—the list goes on. Most activities outside of the house have a hat that matches the task at hand. The hats do not transform my personal character but signal my activity at the time.

When we go to work each morning, we wear the “hat” of a faculty member in a secular university Ideally, our character, integrity, behavior, and interactions on the job also resemble or mirror the husband, wife, friend, father, mother, son, daughter, church member, citizen, and volunteer hats we wear. But too often we adopt an entirely different persona when we don the faculty hat. Not only does the hat change, but so does the hat wearer.

Dualism emerges as a significant challenge for the faculty member in higher education when she divides the spheres or realms of her existence into compartments (i.e., compartmentalism).2 Depending on the “hat” she is wearing, she operates in a compartment with little or no connection to the other spheres of her life. Spiritual and material, faith and vocational, or religious and secular realms are separated and require not only their own hat but their own way of thinking and behaving.

The Christ-following faculty member caught in the dualism trap only thinks of herself as Christian while engaged in “Christian” activities. Otherwise, she is a highly trained expert in history, psychology, music, business, engineering, philosophy, or mathematics, first and foremost. This is the two selves battle of Mark 8:34–38 where Jesus proclaims the uncomfortable topics of denying yourself, taking up your cross, losing your life for Christ’s sake, not forfeiting your soul, and not being ashamed of Christ. You get the picture.

The dualistic academic travels along an alternative career roadway, one nearly void of faith-based commitments. Her chosen route “frees” her from confronting the apathy and idolatry inherent in the God-glorifying route. In fact, she plays along. Reaching the destination of reflecting God’s glory throughout her career is now in doubt. Why? Because God works in the secular university through what Christ followers do every day. Travelers who choose an alternate route may complete their journey, but not the one that reflects God’s glory.

A Brief History of Dualism3

Blame the ancient Greeks! Pythagoras and later Plato laid the groundwork for dualistic thinking. They elevated the mathematical and spiritual realms above the physical world. The world of the mind was good and permanent while the material world was corrupt and transitory. Those who could afford it avoided work to devote time to the life of the mind. In the hierarchy of valuable human activity, physical work was ranked far below the world of ideas. Eastern worldviews (e.g., Hinduism and Buddhism) also reinforced this separation of the physical and spiritual worlds.

Gnosticism was fully developed in the early centuries of Christianity. Gnostics taught that the human being’s spiritual nature was trapped in the physical body. A person could escape the physical world by seeking special knowledge that was accessible through revelation. Christian orthodoxy confronted Gnosticism in the Docetism (that Jesus Christ only appeared to have a physical body) controversy in the second century AD, leading to a statement of orthodoxy at the Nicene Council in 325 AD that declared Christ as truly God and truly man.

So, we moderns can relax at this point because the church dealt with the Gnostic heresy over sixteen hundred years ago. Not so fast! Darrow Miller argues that Gnostic-like dualism has found its way back into the twenty-first century Christian church as the separation of the spiritual and material worlds. He labels dualism in the modern church “evangelical Gnosticism.” In practice, worship on Sunday, Bible studies, prayer meetings, and professional Christian ministries and vocations trump in spiritual importance any activities or vocations in the secular world.

Monasticism, up to the early part of the sixteenth century, also elevated the spiritual value of a withdrawn, contemplative life above what was done in the home or on the farm. The church extended this spiritual hierarchy to clergy versus laypeople, where the former served God and the later served the profane, material world.

The magisterial reformers in the sixteenth century (i.e., Martin Luther, Ulrich Zwingli, John Calvin) challenged this dualistic thinking by arguing that a holistic, Christian worldview does not allow for a spiritual-vocational divide. They taught that all of life is an act of worship. (The next chapter traces the theology of vocation from Luther, the Puritans, the Great Awakening, and Wesley and Wilberforce to today’s new awakening of the vital connection between faith and vocation.)

Dualism still tempts us in every age. Pietism in the seventeenth and early eighteenth centuries encouraged parishioners to emphasize the spiritual sphere of life and avoid the secular culture. The fundamentalist movement in the United States in the late nineteenth and early twentieth centuries implored believers to hold tightly to the fundamentals of the Christian faith and separate themselves from a rapidly secularizing nation. Just three years ago, Rod Dreher proposed in The Benedict Option the idea that parishioners, rather than trying to change the world through the public square, should concentrate their time and resources on building local faith communities that are resilient to a hostile world and serve as salt and light to those seeking Truth in their spiritual journeys.4

Paul Wilson believes God is poised to perform a mighty work through “believers in the workplace”—including the secular university. The Rev. Billy Graham had the same insight.

But Christ followers in secular institutions must explicitly embrace secular work as God’s work. Likewise, seminaries, churches, and pastors must step up their efforts.

In this book, the author shares his struggles of being a follower of Christ at secular places of learning. At times, he felt there was little or no integration of his faith and vocation due to a lack of courage and time.

Get answers to questions such as:
• What are the perils of living a double life by not identifying yourself as a follower of Christ?
• How can Christ regain a foothold at secular institutions of learning?
• How can educators help students move closer to the Lord outside of class?
• What does a faithful presence look like in the academy?

A Sacred Journey presents a Gospel-centered framework for Christian witness on campus where Ph.D. students, faculty, and staff, can serve as salt, light, and leaven in their secular university environments. We must reclaim the sacredness of our academic vocations.

Paul Nicholas Wilson is University Distinguished Professor Emeritus of Agricultural and Resource Economics at the University of Arizona. He has been nationally recognized for excellence in student advising, teaching, and research. The Alumni Association of the University of Arizona awarded him its Extraordinary Faculty Award while the Western Agricultural Economics Association named him a Fellow, its highest honor. Wilson and his wife, Ellen, have three wonderful adult children, an amazing daughter-in-law, and two exceptional granddaughters.