When Living for God Falls Short

by Dr. Berkley A. Baker 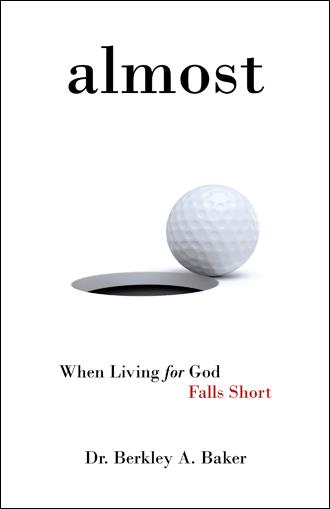 After a week of God-centered merriment, Joseph and Mary begin their journey home. While reminiscing among family and friends, something isn’t quite right: someone is absent. A day passes, and the awkward moment returns; there is a noticeable silence. Although they haven’t seen Him in a while, they think Jesus is in their company. The Scriptures tell us that the couple begins to look for Him. “Hey, have you seen Jesus?” “Excuse me, have you seen Jesus since the festival?” The frightening possibility that Jesus has been left by His parents turns into a harsh reality. Despite their love for Him, the couple inadvertently left Jesus. This wouldn’t be the last time loving and devoted people would leave Jesus behind.

Joseph and Mary spend the next three days frantically retracing their steps to find their adolescent son. As they return to Jerusalem, they face anxiety, worry, and maybe even blame. “He was with you.” “Yeah, but you said we were ready to leave.” Periods of silence and restlessness as they wonder, “Why didn’t our Son follow us home? Where has He been sleeping? What has He been doing? Is He okay?”

Their search and rescue lead them to the temple. Pushing open the doors, with hearts full of hope, they discover a crowd in awe of a preteenage boy. Unlike His contemporaries, Jesus has spent three days among the religious elite sitting, listening, and asking questions. And “all who heard him were amazed at his understanding and his answers” (Luke 2:47).

I can only imagine the look on Joseph’s and Mary’s faces when their eyes catch His. The exhausted parents are relieved but bewildered. Their questions remain: “Has He been here the past three days? Why are people looking at my Son with that awestruck glance? How does He know the answers to these questions?” Despite the supernatural circumstances, Mary’s response is quite natural. Mary approaches Jesus and says, “Son … why have you done this to us? Your father and I have been frantic, searching for you everywhere” (Luke 2:48).

At that moment, young Divinity looks into the eyes of parental humanity and says, “But why did you need to search? Didn’t you know that I must be in my Father’s house?” (Luke 2:49). Jesus’s parents fail to understand His explanation, but Mary keeps these things within her heart. Despite twelve years of observing Jesus’s first stumbles, steps, words, and wonders, these loving parents fail to recognize His true nature. As a result, while Christ was in the center of His Father’s will, He was left behind by His parents. How did Mary and Joseph lose their immaculately conceived Son and find themselves stumbling at His divine nature?

Both stories begin with people who were living godly lifestyles. They exhibited hearts inclined toward God. Jesus’s parents were returning from the feast of the Passover. As one of the most sacred Jewish holidays, it served as a remembrance of God using His miraculous power to free His people. As a family, Joseph and Mary were participating in the festival named after the tenth and final plague, in which God killed the Egyptian firstborns while “passing over” the Israelite firstborns.

Independent of his riches, the young man sought Jesus. Irrespective of his stature, he publicly ran and knelt before Jesus. This gentleman had been keeping the commandments since his youth. This wasn’t an event; it was a lifestyle. In the case of Jesus’s parents and the young proselyte, despite their godly lifestyles, they found themselves without Jesus.

In each case, they demonstrated a comfort with following commandments, but somehow their duty fell short. Mary and Joseph committed the time and resources to travel to Jerusalem. Jesus’s parents gladly obeyed the commandment regarding Passover attendance (Numbers 9:12–13) by taking the time to honor God for His miraculous deliverance. They recognized God’s authority by participating in the pilgrimage every year. Their traditions and customs were consistent with a godly life. But when Jesus’s actions departed from their expectations, they discovered they were no longer with Him.

Interestingly, the young man’s riches did not get in the way of his keeping the commandments, but they did get in the way of Jesus’s invitation. The man was able to follow all the commandments from his youth, despite his riches. He was comfortable with an ordered and logical approach to living for God, an approach based on conditionality and obedience to gain eternal life. From the beginning of his interaction with Jesus, he subjugated himself. The ideas of hierarchy and following rules to please authority were acceptable. But letting go of the things he valued to follow Jesus aroused his sorrow and rejection.

As he walked away, Jesus shared how difficult it is for the rich to enter into the kingdom of heaven. It’s hard for us to take the hand of Jesus when we are clasping something else, even seemingly godly beliefs and convictions. Upon hearing this, Jesus’s disciples reply, “Then who in the world can be saved?” (Matthew 19:25). And Jesus says, “Humanly speaking, it is impossible. But with God everything is possible” (vs. 26, emphasis mine). Jesus is introducing His parents and His pursuer to an aspect of His nature that goes beyond living for Him. He invites them into the unabridged life of living with Him.

Do you ever feel like you are doing all the right things to get closer to God, but even when you try to follow the scriptures more closely, something is still lacking? Do you still feel a void no matter what you do?

In Almost, author Dr. Berkley Baker explains that to experience Jesus more fully, we must be willing to grab hold of His nature. By exploring the nature of the Lord in the context of our relationship with Him, Baker makes it clear that we are uniquely designed to have a dynamic relationship with a personal and intimate God, one who is drawing you ever closer. This is not something that can be accomplished by rules and routines; instead, you must reach for a life characterized by an interactive connection with our Creator in a uniquely original way.

Uplifting and personal, this study reveals a way for believers to move beyond the scripted experience of living for God and into the abundant, purpose-filled life of living with Him.

Dr. Berkley A. Baker is the founder of Creative Insights for Measurable Impact Solutions, a strategic consulting firm, and has more than twenty years of experience working with executive leadership teams. He holds a doctorate from Georgia State University, an MBA from Emory University, and a bachelor’s degree from the US Military Academy at West Point. An army veteran he lives with his wife and family in Georgia. Visit him online at www.berkleybaker.com.