Between Justice & Mercy with Related Essays 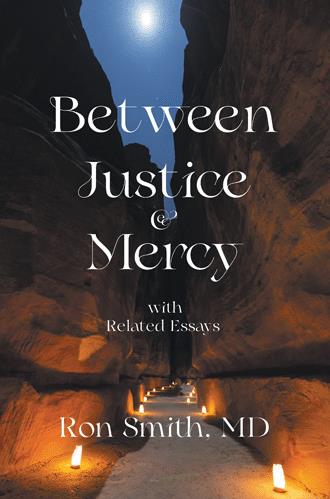 Why do we want to go to heaven? For many, the answer is that they simply don’t want to go to hell. They choose heaven out of fear of hell and the hope of a better place than earth with no pain. No doubt it must, after all, be the better option.

Like my granddaughters, it is as though “the light is on,” but in their slumber, the impending darkness is really just out of sight and out of mind. Many think they have faith and believe that they are saved, but what they really mean is they hope they will not go to hell. They just don’t know for sure, because they are trusting they measure up and will get in.

If anyone really thinks choosing heaven over hell boils down to an afterlife of bliss or torment, they have missed the point altogether. Life is not just marching day by day to the end, when death brings us to the final fork of the road with the sign for heaven on the right and hell on the left. It isn’t about where we will be or even about bliss or torment; it is about who we choose to be with.

God loves us, but he does not need us. He wants to be with us. Nothing is required to receive his love other than to reach out a hand of acceptance. To fully understand how God’s love works, we need look no further than ancient Jewish wedding ritual and the love of a bridegroom for his bride.

There are three parts to the ancient Jewish matrimonial process which took from three to seven years. Modern Jewish and Christian marriage traditions reverse these parts. Initially, the father, or other representative of the bridegroom, would approach the father of the bride with a proposal of marriage. Weddings were not arranged per se, as the bride’s father would ask her if she was amenable. If she was, then the two families would strike a contractural agreement in a written document called a ketubah.

That initiated the first part of the wedding ceremony called the shiddukhin. The ketubah was not a modern prenuptial agreement. Giving up a daughter meant significant economic loss to the family. Its purpose was to set the bride-price called the mohar. It also specified how much the husband gave his bride if he later divorced her. The bride was responsible only for her purity, and the bridegroom was not entitled to a dowry.

Ketubah were religious documents and legally binding. The legally sealed copy was stored in the local synagogues. Marriage was about family, children, faithfulness and above all, love. The ketubah also preserved family genealogy. These scrolls are how we know Jesus’s lineage through both Joseph and Mary. Because they were not preserved like the Dead Sea Scrolls, few, if any, ancient originals exist today.

Once the ketubah was signed, the couple were spiritually, socially, and legally married, and separation required a legal divorce. However, the husband and wife did not yet consummate physically. The bride’s purity was extremely significant now. Mary became pregnant after her ketubah signing, and she could have been stoned. Joseph must have loved her dearly, because by law he would’ve cast the first stone.

The bridegroom first paid the bride-price to her father Then she and he entered a room called the chuppah chamber where they physically consummated. Outside the door of the room, their witnesses stood ready. She would lie on a white cloth called a chuppah. During intercourse, her virginal hymen would be torn and bleed onto the cloth. As soon as the bridegroom saw the blood, he would begin to rejoice and yell loudly. Upon hearing his joyful cries, the witnesses outside the door would join his caterwauling celebration.

After the erusin, the bridegroom returned to his father’s house and continued to work on their living quarters. The bride remained in her father’s house, and no further physical intimacy followed until the wedding feast called the nissuin.

Several more years could elapse before the nissuin, which began when the bridegroom’s father, without notice, sent his son to bring his bride home. Suddenly and without warning, the bridegroom appears at her front door and lawfully takes her back to his father’s house, where the great celebratory nissuin feast is ready with many guests present. The whole ancient marriage practice could take up to seven years. Jacob waited seven years each for Leah and Rachel.

Jesus is the bridegroom, and ancient Jewish wedding tradition is a figura umbra of him and the church. Our ketubah has been signed. The Last Supper represents the bride-price and the chuppah blood of the erusin. The church is now waiting patiently for the Father to instruct his Son to retrieve her for the nissuin wedding feast.

Not all will get into that feast, though. Theirs will be the story of hell and not heaven. Those who have not accepted Christ’s forgiveness with be like the five foolish virgins.

Where is hell? It is a place without God’s perceived presence. There, people will be undisturbed by his voice or his presence, yet tormented by their own nature. Where is heaven? It is the place where God is. He is the real prize—not heaven!

All get what they want. They do not always like it.

Where is hell? It is a place without God’s perceived presence. There, people will be undisturbed by his voice or his presence, yet tormented by their own nature. Where is heaven? It is the place where God is. He is the real prize—not heaven!

All get what they want. They do not always like it.

This book explores God's love, how it is different from other kinds of love, and walks the reader through how that defines and constrains him. Of all character traits, justice and mercy require God to submit himself for justice on our behalf. God is both the judge and the convicted defendant in the person of Jesus Christ, the Son of God who stands representing all mankind. He is the link between justice and mercy, without which we would be separated from God forever. Because Jesus is the Son of God, he has the power to die and take up his life again.

I describe the events of the Last Passover described extensively detail day by day every move Jesus made from the time he came to Lazarus's house in Bethany, on a Thursday to dusk Saturday one week later when he was raised. I explain why Palm Sunday is on a Saturday, the demise of the fig tree on Sunday, the Last Supper on Tuesday evening, and Jesus's death on the cross Wednesday, with extensive detail and Scriptural reference. I debunk the notion that Jesus's crucifixion was on Good Friday which does not allow for "three days in the grave," as Jesus said.

I show how Jesus's ministry, the First Passover in Exodus, and the ancient Jewish wedding tradition explain the events from his baptism in the Jordan to his death in Jerusalem. I show how the Last Supper was not a Passover meal, that the bread was really the bride-price of his broken body, and that the wine represents his blood on the chuppah cloth which proves our purity. Jesus dies on April 3 AD 30 and I show why I think so.

There are three parts to an anciet Jewish wedding ceremony, the shiddukhin, the erusin, and the nissuin. The erusin was the Last Supper. The nissuin is the great wedding feast yet to come.

The related essays address basic Christian apologetics: How We Became the Bride of Christ, Dating the Last Passover, Eternal or Timeless, The Mathematics of God, The Astronomy of God, and Our Spiritual Anatomy.

Dr. Smith practiced pediatrics for 36 years. For the last twenty years, he and his wife worked in medical missions in various world locations, and most recently in Haiti. He has a number of skills and talents completely unrelated to writing.

He accepted Jesus Christ as his Lord and Savior at around age four. His wife, too, has been a Christian since around that age, and they just entered their fourth decade of marriage.

He majored in Chemistry in undergrad with a strong science base. He studies apologetics intensively because he wants to know truth and why he believes what he does. Coupled with his love for Christ and his God, he writes as an expression of what he hears him speaking to his heart.