A practical guide to discovering and fulfilling your unique purpose 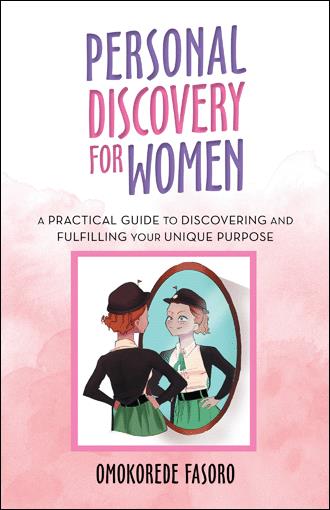 UNDERSTANDING YOUR UNIQUE MAKE-UP AS A PERSON

“You were born an original, don’t die a copy.” (John Mason)

Aside from the fact that women are unique and quite different from men, it is also necessary to note that even as individuals, we have been specially packaged by God, to fulfillunique purposes, irrespective of our sexes.

Have you ever wondered why embassies are always quick to collect fingerprintsof visa applicants who want to come to their countries? It has been proven that no two fingerprints are alike. Not even those of identical twins. Each person has a unique set of fingerprints that can never be matched with another person’s. Aside from the uniqueness of our fingerprints, it is also interesting to note that each person is made up of millions of cells which contain his or her unique DNA (Deoxyribonucleic acid) and genes. These genes (which are a combination of what each of us has received from our parents), are what determine our unique features. In essence, no one has the exact combination of your genes and DNA! You are an original! How awesome and amazing this is!

While growing up as a young girl in the eighties, I suffered from a form of identity crisis. I hated who I was and what I looked like. Why? I was a skinny teenage girl, who was almost 6 feet tall! Most times, I was the tallest person in my class and sometimes, in the entire school! I was bullied because of my height and called derogatory names such as skinny, tallie etc. There were times I hated to walk on the streets of the neighborhood where my family lived at that time. I could be walking on the street, and someone would call me derogatory names, while driving past. I almost became a recluse and an anti-social being. I found escape and joy in my schoolbooks and novels. All these negative names had a serious effect on my self-esteem and self-confidence. However, I came across a particular passage of scripture many years after,which liberated me …

Before I formed you in your mother’s womb, I knew you and ordained you a prophet unto the nations.

In the passage above, God spoke to a young man called Jeremiah, who was possibly battling with a form of low self-esteem. This was at a time when his people (the Israelites) had become captives in a strange land. He had probably concluded that he was useless and a good-for-nothing, when he considered the hopelessness of his state and nation. However, during this chaos, God spoke to him and gave him words of encouragement as found in the book of Jeremiah 1:5.

God assured Jeremiah that He knew about him, even before he was conceived in his mother’s womb. In essence, he existed as an idea in God’s mind, before his parents came together. God went on to add that He not only knew about him, but had ordained (appointed, commissioned, and anointed) him as a prophet to the nations. A prophet is simply someone who is God’s mouthpiece; someone who speaks God’s will and counsel in various aspects of life. As long as you are a child of God, know that He also wants you to be His mouthpiece in your area of influence. Therefore, it is important to discover your area of influence.

The world we are in desperately needs people who will speak the counsel and will of God in the media, in government, in politics, in science, in education and so on. Imagine what kind of world we would have if we had the likes of Daniel, Joseph and Esther running our nations? How awesome this will be!

Back to the story of Jeremiah. God’s message to him, from Jeremiah 1:5 must have been a very encouraging and uplifting message for him. The impact of all God said to him in that chapter, ushered him into an assignment that spanned many more years.

Do you know that this same truth also applies to you and me? God thought about you even before you were born on earth. As a matter of fact, you did not come into existence just because your parents had sex with each other. You came into being because God had alreadyenvisioned the idea and wonder called you, in His mind. He had conceived what you would look like, your sex, your tastes, your strengths, your likes and dislikes, your skin color and so on. Most of all, He had decided on the purpose for which He created you, and the assignment which He was sending you to Planet Earth to accomplish for Him. God also decided the best family, town and nation for you to be born into, that will help you fulfill your God-given assignment here on earth.

This is true, whether your parents planned to give birth to you. Even if you are a child of an unwed woman or a product of rape, it does not change the fact that you were on God’s mind. I once heard someone use this phrase “…There are no illegitimate children, only illegitimate parents.” In other words,whatever the channel through which you came into this world; no matter how unpleasant it was, whether your parents were married or not, God conceived your idea, your purpose, your assignment, and your mission here on earth, even before your parents met. How amazing and encouraging this is!

When I received the revelation from this passage, hope and life were restored into my heart. I understood that God took time first to conceive the idea called me, and then He packaged my whole being to suit the specific assignment He has for me here on Earth.I realized that my physical form is perfect. I did not feel like a recluse anymore. I was confident in my own skin and loved who I was and how I had been packaged by God! What a liberating truth that was for me!

I encourage you also,dear sister, that you not only embrace this truth, but that you believe it with all your heart.

Why not say these words out loud now.

“I was an idea in God’s mind, specially envisioned in His mind, even before my mother and father conceived me. My mother and father had to conceive me, so that the wonder called me can be revealed to this world! I am a wonder to my world!!!”

Everyone has a purpose, a calling, and an assignment. Unfortunately, many people are moving around without having a clue as to why God created them. The sad fact is that many will leave this world without realizing the purpose for which they were created and why they are here on earth. The need to know who one is and the purpose for which one has been created is a major question in the hearts of many, including women. Written in a detailed, and very easy to understand format the book PERSONAL DISCOVERY FOR WOMEN addresses this major question on the hearts of many women.

The book is divided into three sections which takes the reader through a process of self-discovery and self-realization. In the first section, she is made to reflect and have a better understanding of her unique make up as a person and as a woman. The reader is then taken through a step-by-step process where she is able to easily unveil and identify the qualities that make her unique. Some of these include but are not limited to her potentials, her personality, and her passion. These form part of what is referred to in the book as the Five petals of purpose.

The last section of the book addresses the question. “After discovery, what next?” This is to ensure that the reader is not left loaded with so much information, without knowing what to do with it. In this last section of the book the reader is encouraged to embrace and celebrate her uniqueness while also dealing with all limiting beliefs. She is also taught how to set the right type of goals in line with her life mission and purpose, and the necessary steps to take to move from the level of discovery to actual fulfillment of purpose and destiny. This is one book that will leave the reader encouraged and energized to go and conquer the world!

Omokorede is a passionate and anointed teacher of the Word, an ILO certified trainer, writer, speaker, and personal discovery coach. She has close to 20 years’ experience as a professional trainer in various capacities and at different levels, most especially in the areas of personal discovery, self-development, and entrepreneurship.

She is the founder and coordinator of the Women of Essence Foundation- a non-profit organization which she established about nine years ago in Lagos, Nigeria. This foundation was born out of her personal experience, which she refers to as her “wilderness season,” when she battled with near depression and low self-esteem, all in the search for purpose and relevance. The organization has the mission to help women discover, pursue, and fulfil their God ordained purpose, through training, counseling, mentoring and empowerment of women and young ladies.

In 2019, she started the Mary Group - a weekly online Bible study & prayer group - for women from various nations and across diverse backgrounds. Through the Mary Group, she teaches and mentors women who are eager to have a deeper relationship with God, as recorded in Luke 10:42.

She is an ordained assistant pastor at the Redeemed Christian Church of God, where she and her husband have been serving for over 20 years. Omokorede is happily married to Ayotunde her husband of 27 years, and they are blessed with what she refers to as two generations of wonderful children.