The Fulfillment of Passover

And The Timeline of the Crucifixion of Jesus Christ 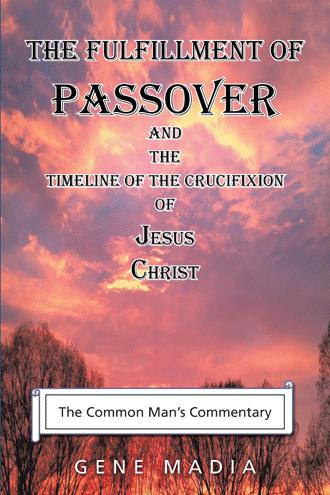 The Fulfillment of Passover and the Timeline of the Crucifixion of Jesus Christ
The challenge of this commentary was to figure out the day of the week on which Jesus Christ was crucified. The normally excepted day of Good Friday did not make sense for a couple of reasons. One was because of all the times that Jesus said He would rise in three days, or on the third day. If He died on Friday, Saturday is one day, and Sunday is only two days. The second reason is because Jesus referred to the sign of Jonah saying He would be buried three days and three nights, in that order. This too does not fit at all, for all four gospels have Jesus rising from the dead on the first day of the week, which is our Sunday. This means there must be a way of explaining how this works out, according to the Scriptures. Along with this is the issue of Jesus being crucified on the day of Passover. The day then has much importance because of all the predetermined details of the Feast of Passover that had to come together exactly right. This plus the many details concerning the sacrificial lamb of God that also had to be met.
Figuring out how the day of Passover is established on the Hebrew calendar is important to knowing the date but not the day. The date is determined to be the 14th of Nisan according to the Scriptures. That month was then the first month of the ecclesiastical year and from there all the other feast days were determined. The interesting thing is how Passover is decided upon and is looked at in detail in this commentary. The next day following Passover began the Feast of Unleavened Bread on the 15th of Nisan, which is also an especially important detail.
A look at the events of the days of the week in which this Passover and the crucifixion happened will shed some light as to which days where which. There is one day of the month that was found in Scripture which can be used as a marker for finding the days. Remember the Jews numbered the days of the week, while the Romans used Sunday through Saturday as days of the week. Narrowing things down, a close look into the day of Passover becomes important. The day begins in the evening at 6 p.m. with what is called the ‘last supper.’ This supper meal would be the first sign that Passover was being fulfilled and things are now being made new. The communion meal would replace the Passover meal and Jesus would now become the object of remembrance.
Following dinner Jesus would face His greatest temptation, for His hour had come. Having successfully overcome this spiritual trial He would now face an unscrupulous trial of false accusations. At 9 a.m. He was crucified and at 3 p.m. He died on the 14th of Nisan, on Passover. Here Jesus fulfills John’s words, “Behold the lamb of God who takes away the sin of the world.” Darkness had filled the heart of Judas and darkness now covered the land, and Jesus would descend to a place of the darkness of departed souls.
Jesus’ body would soon be buried in a rush. The evening of the upcoming Sabbath was quickly approaching. Being that no work could be done on a Sabbath they needed to remove Jesus from the cross and place Him in the tomb as soon as possible. The question is what Sabbath was it? Was it the regular 7th day Sabbath or another? This is also a most important detail in finding the correct day in which Jesus was crucified. The account of events that followed the crucifixion give support to the conclusion reached on this matter. As it turns out the law had many requirements and details about the Passover lamb, plus there were also types and shadows represented by the lamb that also needed fulfilled. Jesus did of course meet and fulfill every detail that applied to the law and to the lamb, which was again another sign of Passover being fulfilled.
History itself gives clues and details that help prove a day for the crucifixion of Christ, as to whether it was Good Friday or not. The years of ministry for the John the Baptist and for Jesus can be accurately determined from Scripture and from the historical references given. Even the prophet Daniel may give some clues into the acceptable years of ministry. All of this will be used as data to find the parameters for the years in which this Passover, on which Jesus was crucified, occurred. The information collected would set the beginning and ending years that this Passover had to occur. To aid this effort, information was obtained from the United States Naval Observatory Applications Department. They certainly met the requirements of being both unbiased and exact. A problem arose when calendar makers created the Julian calendar and then created the corresponding Hebrew calendar as a day before. All the problems created by doing things this way was pointed out and eventually resolved.
The biggest requirement for determining the correct day was what Jesus said about the prophet Jonah. In order for Jesus to be who He said He was, He had to do everything exactly as He said He would do. This commentary will go into detail to show how Jesus fulfilled this also. By doing so it will disprove the Good Friday theory or tradition. Along with the sign of Jonah, Jesus fulfilled the four major reason for His coming. Because of this Jesus can truly declare that He is making all things new. This started with the supper meal on Passover and touched every area of religious life to the point He has declared, “Behold, I make all things new.”

This Commentary is for those who consider themselves students of the Word of God. You seek more than the common understanding about certain subjects of Scripture. Although a view is common or popular, that does not make it so. For you an in-depth search and study is like finding the pearl of great price. There is joy in what you will discover.

Inside you will find answers to:
How this and all Passover days and dates were established?
What were the requirements for Passover and the Passover Lamb?
How Jesus fulfilled all these requirements plus many, many other things?
Why do we celebrate what is known as ‘Good Friday’?
What was the ‘cup’ that Jesus prayed would be removed?
Did Jesus say, “This is My body which is broken for you?”
How did Jesus fulfill the Sign of Jonah?
When He said, “A new covenant,” He has made the first obsolete!

*** There are many interesting and thought provoking things to learn as we dig into the Word of God. ***