My Reason for Hope

Why I Became Catholic and the Answers I Needed 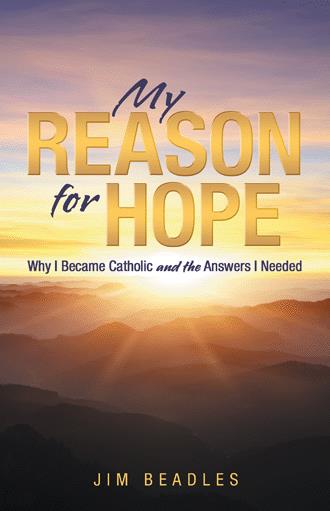 At the end of the day, in every part of our lives, don’t we really just want the truth? If we know the truth, about anything, then we can be effective in dealing with it, regardless of where it leads us. I believe in the expression that says, “people don’t care what the truth is, they just want to hear it”.
For the most part, I believe that’s true, although I know there are those who in no way want to know the truth if it leads to something uncomfortable. For some of us, it is an example of “be careful what you ask for” . . .
We all feel like that at times, don’t we? Why is that? Is it because we are afraid of the knowledge that the truth might reveal? Is it easier to just avoid a truth that is counter to your current beliefs? Is it because deep down we already know the truth, but hearing it will somehow make it real? Maybe more times than not, learning about the truth will require us to reexamine our own belief systems and force us to choose between something we thought was true and something we have learned is the actual truth.
Merriam-Webster defines truth as: “the body of real things, events, and facts; the state of being the case”. The first step in finding the truth is an openness to it when we do find it. As I said before, it may confirm what we already know. But it might challenge everything we know and force us to look at things in a different way.
I think it is fair to say that Christians desire the truth. The search for knowledge is really just a search for truth. I found that to be particularly true in my journey toward Catholicism. The more I learned, the more the truth came into focus for me.
I mentioned that, for me, God’s truth was like putting a puzzle together. The more I searched, the more pieces I found. After some time, and suddenly at the same time, God’s truth as He revealed it became for me that tapestry that has become the foundation of my faith. In terms of the basics, I began to understand things that I had not even thought of in the past.
What I’m really talking about is learning more about what God has revealed to us and finding the origin of those revelations in scripture. I then began trying to relate what I was learning that to what it has to do with the Catholic Church, and what is has to do with me as I continue to search for that deeper truth and relationship with God. Once I started putting those pieces together, then the answer to all of those questions I needed answered in order to become Catholic became crystal clear.

Scripture
John 8:31-32: 31 Jesus then said to those Jews who believed in him, “If you remain in my word, you will truly be my disciples, 32 and you will know the truth, and the truth will set you free.”
John 14:6: 6 Jesus said to him, “I am the way and the truth and the life. No one comes to the Father except through me”.

My Reason for Hope is the book Jim wishes he had read during his own journey. It is for those who may be at the first steps of their journey to learn more about the Catholic Faith, and who want easy to understand answers. It explains Catholic doctrine, the scriptural basis for each, and what the Church teaches using the Catechism as a reference. The purpose of My Reason for Hope is to provide enough introductory information that will lead the reader to begin asking more in-depth questions about the Catholic Faith.

Jim Beadles is a former Protestant who spent more than 30 years resisting God’s call for him to become Catholic. Eventually, he talked with enough people (including virtually every priest in his diocese), asked enough questions, did enough studying, and received the answers he needed in order to fully embrace the Catholic Faith. Jim became Catholic in 2008 and considers this the single most important decision he has ever made. From this one decision, he has experienced a deeper and more meaningful relationship with God, which has made all aspects of his life better.

Jim currently serves as RCIA Director at St. Joseph Catholic Church in Shreveport, Louisiana where he is privileged to work with a dedicated Team to teach and assist others on their personal journey to the Catholic Church. Jim also loves being a husband, dad, and grandfather.