Bold Obedience in a Chaotic World 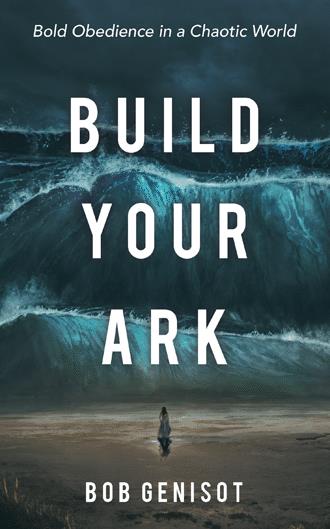 If you were to build a garage or addition on your house, you would need to obtain a building permit from the local government agency. This is an official approval from the proper authority that allows your project to proceed. The intent of the permit is to ensure that your project complies with local standards and regulations for construction, zoning, and land use. During Old Testament times, God required people to offer animal sacrifices to atone for their sins and draw nearer to Him. This means of cleansing and reconciliation was only temporary and had to be performed regularly. Imagine having to stand in line at the city zoning office every time you wanted to add another board to your deck! The good news for us is that Jesus fulfilled that atoning sacrifice requirement once and for all on the cross. We already have the “permit,” so to speak, and it’s a permanent one! All we need to do is obtain it (by giving our lives to Christ) and use it (that is to say, walk in it).

Before I started building my ark, there were some things that I had needed to get straight. I first had to do what I’m telling you to do. I had given my life to Christ years before, which was a critical step, to be sure. I had been baptized, which publicly showed my commitment to following God, a number of years back, as well. It was the walking in it part that was missing. Don’t miss this like I did! I had, in effect, gone down to the city office, purchased the building permit for my ark, I don’t know, maybe even posted a picture of it on Twitter. (Got my ark permit today! #twobytwo.) What I didn’t do, until last week, was use it. Walk in it. That’s obedience. Obedience is not a glamorous concept, to be sure. It reeks of subservience and teeters on the edge of oppression. But true obedience to God is not restricting; it’s freeing in a way that you have never experienced before!

God’s Word is laden with promises for those that walk in obedience. I love what it says in Isaiah 1:19–20 (NIV):

If you are willing and obedient,
you will eat the good things of the land;
but if you resist and rebel,
you will be devoured by the sword.”
For the mouth of the Lord has spoken.

It doesn’t take a biblical scholar to decipher that portion of scripture! In verse 19, Isaiah uses the phrase willing and obedient. To be obedient, you first need to be willing. We need to be willing to follow His Word. We need to be willing to repent for our sins and accept Jesus as our Lord and Savior. Repentance is not obedience, but they are cut from the same cloth. You can’t have one without the other. God wants to lead us into both. He invites, rather than requires. He doesn’t want to force anyone into obedience. That is tyranny. Gaining obedience through heavy-handed means takes no faith on our parts whatsoever. But God does caution us on what the consequences will be if we don’t follow His precepts. Resistance and rebellion are contrary to willingness and obedience. And, as Isaiah so plainly indicates, they are met with a tragic demise.

Do as I Do

Like I mentioned earlier, I recently “retired” from classroom teaching. A little more than a decade ago, I took a one-year hiatus from teaching and worked in the insurance and financial industry. Side note: I know a lot of teachers that have done this. I guess we figure that we talk all day to people that aren’t listening anyway, so we might as well have the chance to make a little more money. I digress. For my role in the financial sector, I worked with an older gentleman from the Minneapolis area who spent his entire career as a financial adviser. He served as a mentor to me, not so much regarding what stocks to buy or mutual funds to invest in, but more with what to wear, who to go to with questions, and how to talk to people.

I observed him with clients at his office for several days. One interaction he had really stood out to me. During a meeting, a client asked for his advice on how she should vote on a particular item related to a company in which she was invested. I was fresh out of “compliance school,” so my ears perked up a bit wondering how he would respond. The Financial Industry Regulatory Authority (FINRA) has very specific rules in what an adviser can and cannot say to a client. In fact, when you go through the educational process, they practically try to scare the stuffing out of you. So, that made my mentor’s response even more notable. He calmly stated, “I can’t tell you what to do, but if I were you, this is what I would do.”

That’s what true obedience is. It is listening to and heeding the advice of the expert—not because we must but because we want to. Because we want the blessings that come with it. It’s doing life God’s way—the right way. It’s choosing life over death in a world filled with overwhelming choices. It’s like being at a Las Vegas buffet filled with every savory entree, sumptuous side, and decadent dessert imaginable, and still choosing grilled salmon and steamed vegetables. (And yes, you can still have a piece of chocolate cake—it just doesn’t need to be the size of a bicycle tire.) Noah exemplified what true obedience is. This is the reason why God chose him among all people to lead humanity in a post-flood world.

We live in a world filled with chaos. From terrorism abroad to anger and violence in our streets. From corruption in government and leadership to evil and wickedness in our own backyards, it’s no wonder why so many people live gripped with fear. The good news? God has the solution, and He’s seen this before.

In Build Your Ark, author Bob Genisot casts a modern light on the familiar story of Noah, a bold adventurer who overcame impossible odds and defied the world’s logic to become God’s chosen instrument in rescuing humanity. Learn how bold obedience in the storm can rescue you from the storm.

Bob Genisot is an incurable golfer, mostly impartial sports fan, unnatural lover of probability, and accidental evangelist. He thoroughly enjoys teaching others about Newton’s Laws of Motion and exotic produce, but mostly about the Goodness of God. When he’s not out on the links, or sharing the Gospel to anyone within earshot, you will likely find him watching cooking shows, laughing at inside jokes, and waiting for the snow to melt with his beautiful wife, Sandra, and his two amazing sons, Jeffrey and Michael.