Putting Truth in Its Place

A Journey to Intimacy with God 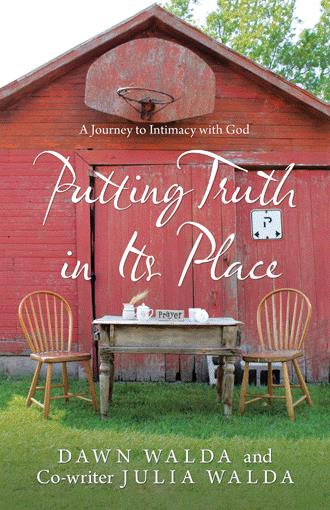 There is a plague within the body of Christ: a lack of freedom. The very thing Christ died for seems to be misinterpreted and reassembled to mean something other than it truly is—a mindset that says we are free but only “somewhat” free. This freedom is limited to a mere positional freedom in the eyes of God, and not a literal spiritual liberation that applies to all aspects of our new life and mind in Christ. This partial freedom narrative states that Jesus only died for freedom from judgement, sin, and hell. It states that we have been forgiven, thus freed from God’s wrath and impending judgement, and granted yet another freedom: eternal life. It states that you have been given the golden ticket to eternal life, but only upon death.

In this frame of understanding, you’re surviving until one day you can thrive because of the mercy of God and the sacrifice of His Son—the end. There is no here-and-now freedom for those of us who face mental battles every day in the form of things like anxiety, depression, habitual sin, and lack of identity. Because of this, freedom has become an elusive and unattainable concept, continually affirmed by our daily experiences. They do not reflect an everyday, practical freedom, only those that will come at the end of our days.

If this narrative of freedom is true, then it’s understandable why one would feel bound and trapped by thoughts of depression and anxiety, a continual struggle with sin, and a lack of identity, as it would imply that Christ is not involved in such subjects.

But what if I can rewrite that narrative? What if that partial freedom narrative is not even true? For Jesus says, “The thief comes only to steal, and kill, and destroy; I came so that they may have life and life abundantly” (John 10:10 ESV). Did you get that? Abundantly.

It’s not an empty bucket. It’s not partial, lacking, or incomplete, but overflowing. It’s not one day, but every day; it’s life itself.

This incredible and life-changing reality of complete freedom applies directly to what has crippled the minds of the bride of Christ—things like anxiety, depression, habitual sin, and a lack of identity.

These pressing and extremely relevant concepts that plague even the most devout Christians, to the point of physical debilitation and even a medical diagnosis, are exactly what my heart longs to address in the pages of this book (again as seen through the frame of reference as written in the disclaimer).

Together, we will address this lie, no matter how true it may seem, as we dissect the Word of God and allow it to shape our lives around the truth of Jesus Christ and the full freedom He died for.

My direct intention for this book is to awaken people to their God-given identity and to liberate them to see the truth for themselves and break free from the bondage of deception, lies, and deadly thoughts that have blinded the bride of Christ. Oh, don’t tune me out yet; don’t just assume this is another one of those books, because it’s not. I lived it. I walked a similar path in a different pair of shoes. I saw how the lies of the devil can trap my mind and my body, causing me utter mental and physical debilitation, which screamed so loudly I was seemingly not free in the confines of my own mind. But here I stand today, free. Not just from hell, not just to attain eternal life (although I am truly grateful for that), and not just to stand acquitted on the day of judgement. No sirree; whoever the Son sets free is free indeed. And today, my beloveds, I am free—daily.

By focusing on intimacy with God, the sovereign authority of scripture, and the divine empowerment of Holy Spirit, authors Dawn and Julia Walda encourage you to put truth in its place and to base your life entirely off the truth of the word.

In Putting Truth in Its Place, they present a practical guide on the renewing of the mind and its importance in overcoming sin and lies. Dawn presents her personal experiences, metaphoric insight, and the practical tools she used as she encountered the life-changing truths of the Bible. Julia offers those same ideas in a more in-depth understanding to ensure you walk away confident as you pursue God and the renewing of the mind in your own life.

Dawn and Julia teach you how to use your tool box of resources to live in freedom, tools like intimacy with God, putting truth in its place, intentionality, and more. The authors seek to awaken people to their God-given identity, to liberate them to see the truth for themselves, and to break free from the bondage of deception, lies, and deadly thoughts that have blinded the bride of Christ.

Dawn and Julia Walda are a mother-in-law and daughter-in-law pair new to the writing scene. They have combined their unique insight, blended writing styles, and expertise in Putting Truth in Its Place, their first collaborated book.