Harold the Hawk at the Beach 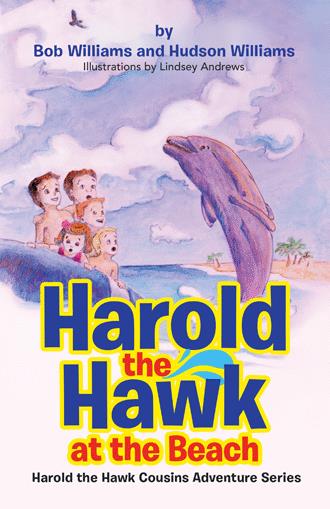 The float continues to drift out further into the ocean. But the distance to the shore was no longer a concern of the cousins. The distance of the three approaching fins was their greatest concern!
“Guys, what are we gonna do?” pleaded Addie, who found herself tightly surrounded by the boys in the center of the float.
“Jack Jack, didn’t you say something yesterday about what a shark’s fin looks like and what a dolphin’s fin looks like?” asked Colt.
“Yes, I did. But that’s a picture in a book from a sideways view. These guys are headed right at us and I can’t see the side view,” answered Jack Jack.
“You mean you can’t tell whether they’re bad sharks or good dolphins?” nervously asked Addie.
The fears of the cousins grew steadily stronger. Their only concern was those three gray fins approaching rapidly closer and closer to the tiny, thin plastic float that kept them out of the dark blue water. However, the kids had been so distracted by the approaching fins in the water that none of them realized what was happening overhead. The raft was now bathed in a protective shadow from above.

The cousins are headed to the sandy beaches off the Gulf Coast for their yearly family vacation.  The four older boys, Hudson, Jackson, Colt, and Griffin join Addie on a large float in the ocean having fun in the sun and surf.  They are unaware, however, that the riptide is carrying them further out to sea.  Far from the beach the cousins find themselves surrounded by several large ocean predators.  Their hopes are sinking fast.

Bob Williams (Pop Pop) and his grandson Hudson Williams both love to write stories.  The two authors agree that God makes Himself known to everyone through His creation.  One clear example of that is Harold the Hawk who flies high in the skies above their North Texas property watching over all the cousins reminding them of God’s watchful eyes and protective hand.

Hudson, the co-writer of this latest Harold the Hawk adventure story, is in second grade in Wylie, Texas. He loves baseball, his brothers Griffin and Solomon, his parents, and his many cousins. Hudson recently won an award for starting a writing club in his school.

Bob, Hudson’s PopPop, has been teaching English and history for over forty years in both public and private high schools. Bob believes that writing for his eleven grandchildren about Harold the Hawk is one of the greatest blessings of his life.