Festival in the Desert

Learning to Rejoice in the Difficult Seasons of Life 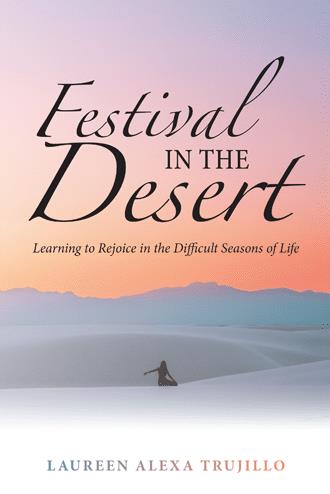 It hit like a hurricane. My entire world was thrown into chaos, leaving me in a heap on the floor of my shower. Somehow, I had gone from washing my hair to rocking myself and wailing as the water mixed with my uncontrollable tears. It took my sister ripping open the shower curtain and screaming at me to get up for me even to realize where I was, her shouts barely breaking through the war going on in my mind. She had died. She had died, and I didn’t say goodbye. She had died, and I had felt her going, but was told not to fly home. My grandmother was very stubborn. Just two days prior, I spoke to her on the phone as she laid in a hospital bed, laughing at me for panicking and asking if I should get a flight out. “I’ll be out by Monday, don’t worry baby,” was what she said. Well, she was right. Early Monday morning, she went to be with Jesus. Early Monday morning, February 6th, 2017, I experienced grief in a way I have never known before.

It’s amazing, isn’t it? That it can feel like your heart is actually breaking in your chest. That the pain is so unbearable that you vomit. You reason with yourself, you try to reason with God, you run through every “if only” scenario you can think of that could’ve changed the outcome. You scream, you wail, you sob, and then, eventually, you stop. For a split second, the world goes very quiet; exhaustion sets in, and there’s nothing left. Then suddenly, grief emerges once again without warning. You are certain of one thing; it’s not supposed to be like this. Our world is broken. Death was never God’s plan.

That thought process spun in my head like a whirlwind for days, maybe months on end. God, it was never supposed to be this way. Anger began to creep in. Anger at who, I was unsure. I didn’t want to be angry at God, for I believe He is good always. However, there it was, anger. Anger and disappointment perfectly paired together and utterly undeniable. There was just this sense of “wrong” that hung thick over me like a weighted vest making each step laborious. C.S. Lewis wrote in A Grief Observed, “…there is spread over everything a vague sense of wrongness, of something amiss. Like in those dreams where nothing terrible occurs—nothing that would sound even remarkable if you told it at breakfast-time—but the atmosphere, the taste, the whole thing is deadly. So, with this.” (Lewis, 1961, pg. 35) It hung over me, my frustration only increased with every unintentionally unhelpful word given from others—the cliché statements pouring in from people trying to comfort me. God bless them for their efforts. I didn’t need words-Words didn’t help-I needed tears. I needed to be able to sit and process and accept without being hurried on to healing. I needed a hand to hold, perhaps even squeeze until I couldn’t. I needed sleep. I needed the rest of the world just to stop and shut up for a second. I needed to feel Jesus' presence comforting me. I just… needed.

But I didn’t give myself time. I didn’t take the space to sit and process and accept. I didn’t know-how. Things needed to get done. Life was continuing. Other people were still hurting. Bills still needed to be paid. I told myself I had to continue to be responsible, like always. Little did I know that I was nowhere close to being done with grief or disappointment. This event was the catalyst to my journey into the wilderness. At that moment, I didn’t know I was being refined, or that refinement felt like complete brokenness. That epiphany wouldn’t come until much later. I believed God never intended for there to be death, yes, but I hadn’t yet learned that He knows how to use it to reach us, to get to the very core of us. To shatter the pretty alabaster jar1 that we present ourselves in, to reach the more valuable contents and pour us out at His feet-our very lives offered up as a pleasing aroma.2 To take us from a faith that is built on a house of cards, to one that is built on the solid rock of Christ, if we allow Him.

“God has not been trying an experiment on my faith or love in order to find out their quality. He knew it already. It was I who didn't. In this trial He makes us occupy the dock, the witness box, and the bench all at once. He always knew that my temple was a house of cards. His only way of making me realize the fact was to knock it down.” ― C.S. Lewis, A Grief Observed (pg. 52)

This was blow number one. Perhaps, phase one of the tear down that would drive me into a season where I would find myself with no choice but to sit and be with God. Haven't I been doing that for pretty much my entire life? Sure, I had spent the last 20 years of my life learning to pray, learning to hear God’s voice, reading the bible, experiencing heartbreak, and then mending at the hand of the Great Physician.3 But isolation? The “allurement” to come away with Him into a season of what seemed like wandering? Up until 2017, that was fairly uncharted territory. All the years of learning to lean on Him were building me up for this; Much like years of gathering prepares you for the years of famine. Years of building with Him, of learning about God and His character enabled me to recount and recall all I know of Him as I wrestled and wailed my way through two years of grieving, tears becoming one of the most consistent parts of my life. Some days tears were the only water I drank and the only food I ate. How have so many before me traversed the terrains of both the physical and metaphorical wilderness and found joy in their suffering? In scripture, these people spent days, even years in the actual desert, eventually finding themselves by encountering God. Most did not rejoice. In fact, some wanted to rebel, or lay down and die entirely, but rejoice? Have a festival? Enjoy it? This is where God’s ways and thoughts are clearly much higher than our own (Isaiah 55:8-9).

But perhaps, it’s not so impossible. Perhaps, it’s actually beautiful. Maybe there is an actual oasis tucked away in the barren landscape of the desert. What if it’s not isolation, but an invitation to meet with Jesus without any distraction? What if that oasis is God Himself? What if maybe, just maybe, the season of aloneness is actually the beginning of complete wholeness? What if our sovereign God and good Father is providing the space that is necessary to strip away every falsehood, lie, and fake comfort from our lives? What if the purpose is to empower us to find the warrior within so we can take hold of the actual Promised Land we were created to inherit? That’s what Festival in the Desert is all about. Taking the journey through the difficulties of life with eyes that look for God’s hand, choosing to see Him, to meet with Him, to be led by Him even when it makes absolutely no sense to you or maybe even any other human being. To understand that it is not for mere isolation, but for consecration to God Himself.

Life is often filled with trial, heartache, grief, and struggle. But, perhaps there’s a treasure to be found in those difficult seasons and that treasure is intimacy with God Himself. That should be reason enough to rejoice. So, how do we take God’s command to Pharaoh in Exodus 5 to “Let my people go so they may hold a festival for me in the desert” as a holy invitation to be stripped down and made whole, while still worshipping the one who allows the stripping?

Through vulnerable and transparent stories, Laureen Alexa Trujillo shares her personal testimony of hardship and trial and all that God taught her through suffering. She highlights the faithfulness of God and brings attention to the purpose of her struggle: To learn dependency on God by being exposed to the barrenness of the desert, surrender the false comfort of our personal Egypt, and come out stronger and more refined for the Promise Land we were created to inherit.

Through Festival in the Desert Laureen walks you through the question that confronted her: how do we learn and truly embrace the fact that God can and will work all things together for good as we seek Him and choose to love Him through uncertainty, fear, and hardship? The stories and interactive prompts will point us to the heart of the Father, reminding us that God is faithful, present, trustworthy, and more than capable of making a way for us when there doesn’t seem to be one, ushering in freedom, comfort, and renewed hope.

Laureen has a background in acting and fitness, a heart for Jesus and passion for helping people live their best lives physically, mentally, and spiritually. She currently lives in Los Angeles and is part of a church in Downtown LA called For The PĒØPŁËŠ Church. When she’s not working, writing, creating, studying, working out, or being a social butterfly, you’ll find her cuddled up with her dog and a cup of coffee (or two).