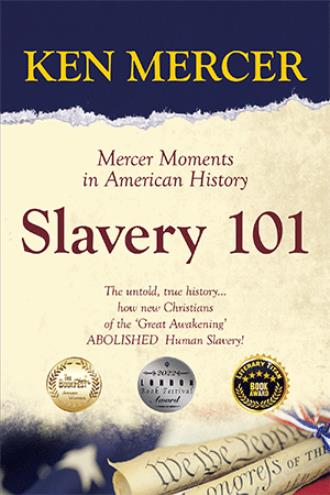 (first book in a series: Mercer Moments in American History)

Imagine you are living in the year 1776. Human slavery was over 8,000 years old, but not one nation in the world, including the powerful tribes of Africa, had moved to abolish slavery.

For example, in AD 700, the Arab-Muslim slave trade began. This was 750 years before Columbus discovered the New World and 1000 years before our Declaration of Independence.

However, the Thirteen Colonies and Europe had just experienced a “revival” known as “The Great Awakening.” New “radical” Christians firmly believed that human slavery was a sin and we needed to confront our sin.

Did the Great Awakening “wake up” and change hearts and minds regarding human slavery?

Here is a “preview” from Ken Mercer’s new book: Slavery 101.

The 1776 Declaration of Independence, primarily written by Thomas Jefferson, included a long list of grievances against King George III of England.

Question: Which grievance did the Southern colonies demand be deleted before they would agree to ratify the Declaration of Independence?

a) Denying trial by jury

b) Bringing slaves from Africa

I grew up believing the famous Declaration of Independence was unanimously approved by the colonies. Not true.

The document delineated the reasons for declaring independence, a list of grievances or complaints against King George III. But the colonies had to agree to all the grievances before passage of the final document.

Remember that this is the Jefferson who inspired the world with his famous pronouncement that “all men are created equal” and the profound trilogy of “inalienable rights” being “life, liberty and the pursuit of happiness.”

Here is the political paradox: Jefferson was a slave owner.

Jefferson inherited slaves from his father in 1768 and acquired slaves on his marriage in 1773. He owned an average of two hundred slaves at any point in time.

Yet historical records prove his original draft of the Declaration of Independence included a grievance that blamed King George III for bringing slavery to the thirteen colonies.

Thomas Jefferson, a lifelong slave owner, called slavery a violation of the “most sacred rights of life & liberty.” Jefferson blamed King George III for creating a “market where MEN should be bought & sold.”

It is my hope to inspire and challenge my readers to dive deeper. Please note that slavery existed in the world for more than eight thousand years before the 1776 founding of the United States. Before the Declaration of Independence in 1776, not one nation had ever moved to abolish slavery.

This appears to be self-contradictory. Thomas Jefferson, who owned an average of two hundred slaves during his lifetime, was prepared to begin our United States of America by publicly declaring in our founding document that slavery was evil.

What could have so radically changed the hearts and minds of men regarding slavery?

I passionately believe the difference between the thirteen British colonies and the rest of the proslavery world was the wave of spiritual revival in America known as the “Great Awakening.” The message of freedom and recognition of sins had a profound effect on our founders and led to the establishment of many American societies to abolish slavery.

For example, in 1785, the first chief justice of the United States, John Jay, founded the first abolition society in New York. In 1799, Jay, who had become governor of New York, signed into law an act for the gradual abolition of slavery— sixty years before the Civil War.17

Answer: The correct answer to the question at the beginning of this Mercer Moment in American History is B.

Please review Jefferson’s entire original grievance on slavery that delegates from the Southern colonies wanted removed before agreeing to the final twenty-seven grievances of the Declaration of Independence.

He has waged cruel war against human nature itself, violating its most sacred rights of life & liberty in the persons of a distant people who never offended him, captivating & carrying them into slavery in another hemisphere,

or to incur miserable death in their transportation thither. this piratical warfare, the opprobrium of infidel powers, is the warfare of the CHRISTIAN king of Great Britain.

determined to keep open a market where MEN should be bought & sold,

he has prostituted his negative for suppressing every legislative attempt to prohibit or to restrain this execrable commerce:

and that this assemblage of horrors might want no fact of distinguished die,

he is now exciting those very people to rise in arms among us, and to purchase that liberty of which he has deprived them, by murdering the people upon whom he also obtruded them;

thus paying off former crimes committed against the liberties of one people, with crimes which he urges them to commit against the lives of another.

“My Christian faith taught me always to fight hard but only to fight back with the truth. Sadly, I learned that the opposition to Judeo-Christian faith and family values has never had truth as a requirement.”
—Ken Mercer

Mercer describes slavery as Evil. Slavery existed in the world for thousands of years before the founding of our thirteen colonies and before the signing of our 1776 Declaration of Independence.

Then came ”The Great Awakening” of the Christian faith in the United States, the United Kingdom, and Europe. The movement to abolish world-wide slavery was born.

Article 1 (Section 9) of the Constitution, the Emancipation Proclamation, and the three post-Civil War Constitutional Amendments, are just a few examples of historical events championed by Christian men and women standing firm against powerful and evil forces.

This book, Slavery 101, is the first in a series of “Mercer Moments in American History.” Future projects planned include Constitution 101—Separation of Church and State, and In God We Still Trust.

Ken Mercer believes: “We will never fully comprehend our Founding Father’s challenge to continuously strive to become a ‘more perfect Union’ unless we understand what makes our United States of America so exceptional. It is the profound impact and unbroken revival of Judeo-Christian values throughout our history.”

Ken Mercer, is an author, speaker, and Christian singer. He was blessed to serve in the Texas House of Representatives and the Texas State Board of Education. Ken Mercer labels himself as a Christian and a conservative. His motto and slogan remains: “Faith, Family, and Freedom.” Mercer will stand for his faith, strengthen the family, and defend our God-given freedoms.