She is My Child

What My Daughter’s Medical Journey Taught Me About Faith, My Heavenly Father, and Flying Standby 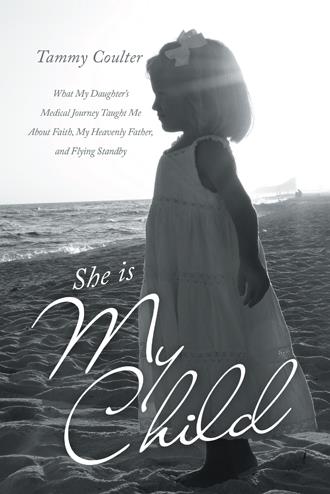 When all was said and done, and we were in the elevator heading back to the lobby, Paul and Rachel delivered the news I had been waiting for all week.
"Good news! Ava qualified for the clinical trial!"
It was such a simple sentence, but what it meant to me at that moment is beyond description. Everything we had prayed for had come down to that statement—all the years of going before God on bended knees, keeping faith in His timing, and asking for His will to be done, no matter what it was. Paul and Rachel knew only part of the impact their news had on my heart. I was not only thrilled over Ava's acceptance into the trial but also thankful to God for His incredible guidance and faithfulness in getting us to that point. These precious people who had just come into our lives didn't yet know that God had long been in the trenches with us and would now be guiding them, as well.
All the kids had appointments with Dr. Burton that day, and since all three of them—Ava, Eddie, and Nicholas—were now officially in the study, Paul and Rachel took us to visit the Clinical Research Unit and meet the nurses who would be caring for them each week. They were so kind and personable, which was wonderful to know since we would be spending a lot of time with them over the next six months.
That afternoon, Meme, Ava, and I celebrated. We ate at Panera Bread (yes, again) before walking the neighborhood once more and stopping for some gelato, which I had never before tried. I chose a cup of raspberry, while Ava, after being convinced it was similar to ice cream, naturally selected chocolate. Meme ordered the lemon and raspberry.
The gentleman taking our orders asked Meme, "Would you like some Bailey's on that?"
Noting the questioning look on her face, I tried to tell her she wouldn't, but to my surprise, she quickly said, "I'll try it!"
Now first of all, Meme only has one good ear. The auditory nerve in the other one had to be severed years ago due to an acoustic neuroma. Second, Meme doesn't drink, and even if she did, with what I know of her history in taking even the simplest of medications, she wouldn't hold it well. So all I could think was that I would now have to find some way to maneuver both Ava and Meme back to the hotel in the stroller.
After getting our orders, we sat down at a table. Meme took a bite of the cream and said, "Oh! There's alcohol in that!"
I told her Bailey's is alcohol, which is what I was trying to tell her when she ordered.
"Oh, I thought he said 'bay leaf,' she replied. "I thought that was a strange combination!"
You now see why we desperately needed her with us this go around. She was the entertainment portion of our trip.
As we walked back to the hotel that afternoon, I called our church secretary and asked her to spread the word about Ava's acceptance into the clinical trial and to thank everyone for their prayers. I was about as giddy as I could be. I could stop saying "if" she gets into the trial because now she was in. Greg and I had said many times that we would be disappointed if she didn't get into the trial and a bit anxious if she did. Now I had to think about traveling to Chicago every single week for the foreseeable future. The drug company would take care of our expenses—airfare, hotel, food—so that was not a concern, thank the Lord. It was just a lot to think about—taking my five-year-old daughter to a big city like Chicago every week by myself. I was not the seasoned traveler, and I knew I would have to be extra cautious. Truly responsible. I would really have to be an adult now! But isn't that just the way? God gave us this wonderful gift after so much prayer, and here I was wondering if I could actually do it every week. The short answer was, not really. But God could do it and get us both through everything that would come our way as we traveled. And He would have more ways to show His faithfulness than I ever imagined when we first embarked on this journey.

In 2007, fourteen-month-old Ava was diagnosed with Morquio Syndrome, a rare, progressive, genetic disorder for which there was no treatment. The jarring news left her mother Tammy reeling and wondering what the future held for her daughter. As the days following the diagnosis blurred together, Tammy saw two paths before her—fall apart or fall into the arms of the Lord. For a time, she did both, struggling with her emotions one moment, feeling God’s peace the next, all while continuing to care for her young family. Slowly, through near-constant prayer and Bible study, her burgeoning faith grew stronger than her fear and distress, leading her to a path she hadn’t seen—one that would test her even more and offer help for Ava.
In She is My Child, Tammy Coulter shares her spiritual journey, alongside Ava’s physical one, from diagnosis to surgeries to a long-anticipated Morquio clinical trial that had them flying to Chicago every week for more than two years. She reveals the most difficult moments and the greatest victories, as well as the humorous situations she and her daughter so often encountered, while highlighting God’s provision and what He taught her along the way.

Tammy Coulter graduated from the University of Alabama in Huntsville with a communication arts degree and a certificate in technical communication. She was a technical editor until the birth of her son, when she became a stay-at-home mom. After the birth of her daughter, her role expanded to include researcher, student of the Psalms, and full-time prayer warrior. Tammy lives in Madison, Alabama, with her husband, two children, and their Jack Russell terrier.