An Anthology on Nuclear Cold Fusion 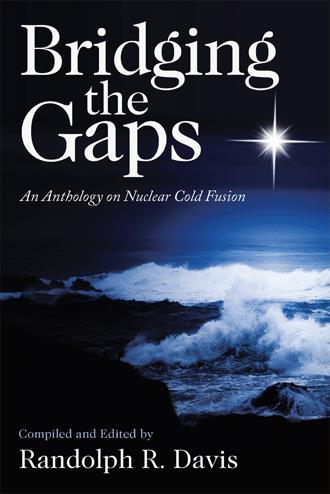 The Northern Virginia team, therefore, focused upon designing a gas or gaseous type of system. It includes a central reaction chamber that is surrounded by a heat exchanger/boiler. The reaction chamber is designed to contain high gas temperature and pressure during operation and to be opened and closed for maintenance. … The ultimate objective is to contribute to development of a commercially useful cold fusion system as the prime power source for community-based power plants. (Chapter 1)

Cold fusion scientists have been able since the early 1990s to demonstrate experimentally that a watt of excess power (heat) correlates with production of 0.6 x 1012 to 4 x 1012 helium atoms per second. …. Some scientists with suitably sensitive mass spectrometers have also been able to measure helium-3. (Chapter 2)

Phonons are a quantized form of lattice vibration (the energy is carried in discrete quanta). Phonons have energies and vibration frequencies (about 1012 to 1014 Hertz) related to a material’s temperature. … Cold fusion scientists have used related concepts since the latter part of 1990 to investigate the idea that cold fusion could be caused by strong interactions between high-frequency phonon vibrations in cathodes of their cold fusion devices and the electrons surrounding deuterium and hydrogen atoms in its channels and defects. (Chapter 3)

A cold fusion generator can be designed to absorb most of the nuclear radiation that it produces. Approximately 2 x 1017 (p, d) fusion reactions per second are needed in the cold fusion generator for 200 kW of power. If the walls of the reaction chamber and heat exchanger are sufficiently thick to attenuate about 90 percent of the radiation and the cathode were encased in a tungsten sleeve to increase this to 98 percent, then 2 percent of the photons (4 x 1015) would still be emitted into the area around the generator. … Intense gamma radiation would not be emitted when the generators are powered down for maintenance or in a standby mode. For space power applications, astronauts would be able to perform maintenance and other activities in the same area of their spacecraft where the cold fusion generators are located. (Chapter 4)

Industrial partners will be technically advanced research and development companies, highly interested in solving the climate crisis, and committed to advancing scientific discovery and technical innovation. … Agencies of federal and state governments, especially large power users and those with an R&D mission for energy development, should support cold fusion systems development. Public-private partnerships are needed between industry and these agencies. The US Navy has supported research in this area of technology, and more recently, some support has been provided by the National Aeronautics and Space Administration. (Chapter 5)

Instead of thinking about the metal surface internal to the very small spaces, it is also possible to visualize the internal surface itself as connecting into many narrow, one-micron-long linear channels and defects branching off from the small spaces. Each of these more narrow, linear channels could contain several thousand deuterium and hydrogen atoms. Assume that each space branches off to ten linear channels or defects, and that each channel contains 2,000 deuterium atoms, providing the possibility of 1,000 cold fusion reactions. These reactions would produce 8 x 10-10 joule in each channel, 8 x 10-9 joule in 10 channels, or 216 joules in each cubic centimeter of the cathode. … (Chapter 6)

The reaction chamber is designed to be large enough to contain an anode, an appropriately sized cathode surrounding the anode, a microwave loop antenna, a temperature sensor, and insulators and physical supports for these components. … Each manifold includes gas measurement chambers, temperature and pressure sensors, and mechanical and electric valves to control gas flow. … The other manifold is designed to separate the helium gas by-product, to quantify the amount of helium separated, and to store it for later extraction and analysis. The design employs diffusion through a thin membrane to separate helium from deuterium and hydrogen. Materials considered for the helium permeable element, such as zirconia, fused silica, and silica glass, are able to withstand high temperatures. Sufficiently high helium diffusion rates are possible due to helium’s small, monoatomic molecule diameter compared with hydrogen’s larger diatomic molecule. (Chapter 7)

The first three years of the program should emphasize laboratory demonstration and testing, while the fourth and fifth years should focus upon V&V and manufacturing. (Chapter 8)

Engineers assigned the task of developing a small cold fusion generator demonstration experiment will face complex and possibly unsolvable technical issues related to size restrictions. A useful operational unit providing less than 200 kW (heat) is not expected to be able to be built and demonstrated. But if successful, a goal for such demonstration experiment should be to produce energy for some useful purpose, such as a remote, unattended power source or a device to complement spaceborne radioisotope thermoelectric generators (RTGs). (Chapter 9)

Initial implementation of cold fusion technology is envisioned to be for community-based power plants or “microgrids” that supply electricity to local buildings and small communities. … With 8,760 hours in a year, the cost of electricity would be thirty cents per hour for 5 kW, or about six cents per kW-hour. This is much lower than today’s cost of electricity from the power grid (e.g., ten to twelve cents in Virginia; twenty-two cents in Alaska; and thirty-two cents in Hawaii). (Chapter 10)

Bridging the Gaps: An Anthology on Nuclear Cold Fusion is written in scientific language that can be understood by first year college physics and engineering students, environmentalists and ecologists on the cutting edge of science, and local and federal government agency personnel responsible for solving the problems of global warming.

Bridging the Gaps provides a vision for research and development (R&D) managers to develop cold fusion power generators as a solution to the world’s climate crisis. Includes vital design information not previously discussed by the cold fusion scientific community.

Cold fusion will be the new, key source of power as the world moves to sustainable, carbon-free energy. Deuterium required can be extracted from water.

As little as 0.0001% of the deuterium in global water can provide 1025 joules of energy. This is sufficient to power the 800 million households on earth and meet the needs of industry for hundreds of years.

Randolph R. Davis is a scientist who worked forty years in the US Department of Defense and the Department of Energy on nuclear and space-related research and development programs. He served as president of DOE’s chapter of Sigma Xi, the Scientific Research Honor Society, and as a member of DoD’s Acquisition Corps. He and associates in Northern Virginia have studied nuclear cold fusion for the last twenty-five years.