There Is Now No Condemnation

by Beryl I. Cowthran Ph.D. 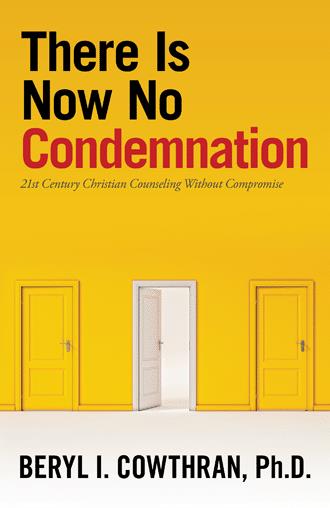 Who or what establishes what is moral or immoral? Plausible or not, it seems that most people consult the internet for everything from do-it-yourself projects to diagnosing physical ailments. Religious topics and morality are not excluded from the search. The Internet Encyclopedia of Philosophy defines morality as the view that moral judgments are true or false only relative to some particular standpoint (for instance, that of a culture or a historical period and that no standpoint is uniquely privileged over all others.) Could the implication of this definition be that moral compliance is judged at the level of human beings and not by the supreme God? Moral relativism not only suggests that no standpoint is uniquely privileged over all the others, but it also implies that there is no universal set of morals. A search of the definition of both morals and morality yields varying, yet similar definitions. The definitions contain subjective terminology such as “wrong,” “right,” “good,” “bad,” and others. The prevailing issue with this subjective terminology is that it results in ambiguity and leaves room for personal and cultural interpretation. Lucy Ann Moll suggests that moral relativism is old news dating back to the Garden of Eden, where the smooth-talking serpent seduced the Adam and Eve. In Chapter 8 of the gospel of Mark, we are introduced to Jesus as He enters Bethsaida. Verses 22–26 record that a blind man was brought to Him for healing. Deciding to take the man out of the town, Jesus spat on his eyes and posed a question. After putting His hands on the man, the all-wise, all-knowing Jesus asked him if he saw anything. What follows is very interesting and has been interpreted several ways. The man answers, “I see men as trees, walking.” Jesus places His hands on the man a second time and he sees every man clearly from that point.

Among theologians and Christian commentators alone, there are several interpretations of the same text. Are they all wrong or, all right? Let’s consider a few of them. Could the progressive healing of the man have be because he struggled with doubt? Surely, the healing could have taken place immediately. Could the progressive healing of the man be a picture of the disciples’ slow, but progressive spiritual comprehension as suggested in the King James Study Bible? Was this a lesson regarding perception being that he saw men as trees walking? Was it an exercise in believing God when things do not fully materialize the first time? Is there an appreciation in the text for friends who have faith enough to bring their friend to God? Considering that the scripture says that they brought their friend to Jesus and Jesus took him out of town, should we learn from them how to let go and let God? Could the implication be that our walk with the Lord is a gradual process? Matthew Henry suggests that the blind man, himself, did not display the earnestness that other blind men had demonstrated in expectation of receiving healing. Is this really the case or is this what Mr. Henry needed to receive from the text personally? There are no “clear-cut” answers to the aforementioned; however, the work of the Holy Spirit is always precise! Christian counselors need not only the assistance of the Holy Spirit, but also His guidance. For me, presently, I view this text through a different lens. As stated in the introduction, Christians are often given to cells, silos, groups, committees, and categories. As I pen this narrative, the world has been in practice of peaceful protests. Considering recent events, I believe that it is our Christian responsibility to look within ourselves and evaluate the presence of racism, biases, discrimination, subjectivities, proclivities, and other evils that have the unhealthy potential for clouding our vision. Perhaps when we look within, we will find that we, too, need another touch. For me, it is a question of how we see humanity. The man in the text did not see humanity as it was created. Instead, he saw men as trees, walking. When Jesus is asking the questions, it is very difficult to lie about what we see. However, when we allow ourselves to ask these questions apart from Him, we leave the door open for false perspectives and willful blindness to areas which need correction.

This particular text demonstrates the importance of both proper interpretation and life application. While the Christian counselor is highly encouraged to include scripture as part of any counseling material and session, he must use it wisely and responsibly. Scripture should never be used to fit the desires of the counselor nor the counselee. Instead, it is used to guide and meet the need of the counselor in providing the counselee with tools to help him navigate life. When helping someone in need, Christian counselors are to beware of sharing cookie-cutter solutions. Each individual presenting with a need for counseling for the first time should be treated as a unique experience. When performed, a root cause analysis may reveal something very different and deeper than what presents at the surface. Performing an analysis is a great practice, which should be used consistently throughout counseling. This allows for more timely, appropriate, and contextual application of the Word.

Some would contend that moral value is only applicable within the cultural, social, personal, and/or historical boundaries for which the moral is practiced. Moral relativism is subdivided into at least three positions: descriptive, meta-ethical, and normative. Descriptive moral relativism states or describes the way things are or as they are observed based on cultural and social diverseness. Meta-ethical moral relativism is more subjective and self-relating. This position explores how “I” see things and proposes that there is no universal guide for morals. Normative moral relativism objectively suggests that everyone has an opinion which should be tolerated because no universal standard is available. The reliability of relativism is most often tested within the window of these three positions.

In a world of moral relativism, Christian counselors often struggle to address 21st century issues which have barged right into the church. In unprecedented times, pastors, parishioners, and counselors must come together to face these challenges head-on. Identifying areas where the counselor and counselee can agree to disagree, as well as those areas where they cannot afford not to agree is of utmost importance for reaching answers to some of the toughest issues in counseling. Moral and cultural relativism often widen the gap between resolution and problem. Christian counselors are tasked with sorting out the entangled web of distortion concerning what is idealistic and what is realistic. The process of addressing hot topics such as abortion, artificial intelligence, racism, same-sex marriage, sexual orientation, and a growing list of other things, requires a compassionate approach without compromise of the Word of God and also, without condemnation. The equilibrium necessary to accomplish this delicate balance of delivering compassion without compromise and condemnation is achieved through proper application of the Holy Scriptures. There Is Now No Condemnation: 21st Century Christian Counseling Without Compromise is a guide for understanding the counselor/counselee relationship and a tool for exploring a comparative analysis between worldly relativism and God’s absolutism. The need for salvation, the work of justification, and the ongoing process of sanctification are stressed in this work. These fundamental pillars of the Christian faith are important not only for successful Christian living, but also for successful counseling.

Dr. Beryl Cowthran is a teacher, trainer, mentor, pastor/counselor, and writer. Beryl’s combined experience is inclusive of over 15 years of ministry, more than 20 years of teaching, training, and mentoring, along with nearly 20 years of serving in the healthcare industry both at the bedside and in leadership. She has a gift for helping others to forgive, heal, and rebuild.

Beryl delivers both leadership and personal development training for churches, public sector, volunteer, and business organizations. A humanitarian at heart, she sees the extension of empathy and compassion as daily goals that everyone should strive for. Through mission efforts, she continues to serve those who have been marginalized, impoverished, and uninformed. She has traveled abroad to help meet others at their point of need. However, Beryl believes, today, America is one of the world’s largest mission fields and focuses her attention locally. Beryl is passionate about helping people to discover their potential and live their God-intended lives. She serves as Founder and Pastor of Grace Hill Church, Shreveport, Louisiana.