From Cotton Fields to Mission Fields

Stories I Love to Tell

by Fred M. Allen Foreword by Duane Allen of The Oak Ridge Boys 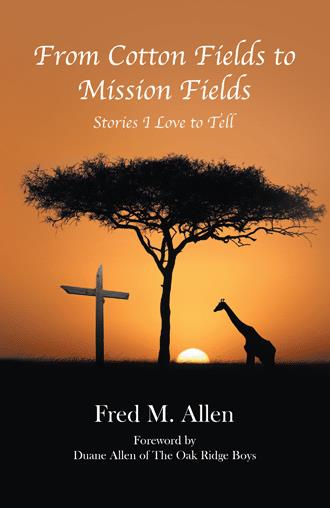 Rolling Cotton on the Farm

Perhaps the loneliest job on the farm was that of rolling cotton, a job usually assigned to a young teenager like I was at one time. After the cotton or corn was planted, we waited about two days for it to dry. Then a horse was saddled up and hitched to the roller. I would climb up in the saddle and begin the long ride that would last until noon, when the horse named Prince and I would go for lunch. After lunch, we would roll again until almost sundown, when I would finally get off the horse, release him from the roller, and head for the barn. There I removed the saddle and harness and fed Prince. Only then could I go home, freshen up, and sit down to some of my mama’s delicious cooking.

We rolled cotton to press down the soil so the Texas wind would not blow it away and to prevent the birds from stealing the seeds that had been recently planted. Before I started rolling cotton, my daddy had to prepare everything for the job ahead. First, a tree had to be found in the woods that had about an eight-foot span of just the right-sized trunk, which could be cut, stripped of its bark, and smoothed so it would roll nicely. Then a hole had to be drilled in each end with a brace and bit. Long, half-inch bolts had to be driven into the holes, with a large washer in place, and lengths of chain were attached to the bolts, one on each end of the roller. When all was ready, I mounted Prince, and we began rolling cotton, two rows at a time. Yes, it was lonely rolling cotton all day. I either read a book or sang to the horse pulling the roller.

One book actually helped shape my life, for the book was the biography of Dr. David Livingstone, the famous medical missionary from Scotland who ministered in the part of Africa where I served as a missionary many years later. Who would have thought that I, a young teenager from Taylortown, Texas, reading a book about David Livingstone, would end up in Africa, serving in virtually the same place as Livingstone? In our first term in Zambia, I went with my family to Chitambo Village where he died and his heart was buried.

As a thirteen year old boy on an East Texas farm, Fred M. Allen read a book about explorer/missionary David Livingstone and was mesmerized.

Many years later, he stood at the edge of the mighty Victoria Falls and gazed upon a statue of Livingstone. By then, Allen had spent a lifetime in service for the Lord.

From Cotton Fields to Mission Fields reveals the experiences that led Allen to make it his mission to spread God’s Word, beginning with his boyhood in Texas and extending to his decades of work as a missionary in Zambia.

Allen began writing his stories for family and friends but realized how much his words could inspire others, after being given a column in a weekly newspaper.

Then his brother, Duane Allen of the musical group “The Oak Ridge Boys,” offered to share his stories on social media. Over and over, people asked, “Are these stories in a book?”

In this inspiring Christian memoir, Allen looks back on his life, collecting those stories in one place. His experiences highlight the importance of faith, hard work, and walking the path that God intended.

Fred M. Allen has served in churches in the United States of America and spent twenty-seven years as a missionary in Zambia, Africa, where he developed indigenous music and youth ministries. He was instrumental in coordinating the digging of fourteen water wells and hunger relief projects in Zambia. Upon retirement, he and his wife, Joy, were involved in a variety of ministries in Texas.