God said: “Believe and you will see.”

Our Story Should be God’s Story 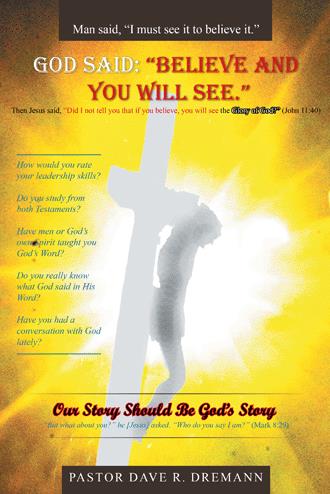 One day while visiting another church, an elder and I were discussing the pool of candidates for the position of deacon, which was, as he put it, “nonexistent.” Of course, this led to a discussion of qualifications. The scripture that is proposed most often is 1 Timothy 3, which is a great list to go by, but is it inclusive enough? We seem to show a legalistic view of this without compassion or humility. We consult the New Testament instead of understanding the full picture of God and His expectations concerning leadership, which comes from knowing both Testaments.

The elder mentioned that it was difficult to find truly qualified candidates because many have been divorced, smoke, or drink. I asked if these were truly the only qualifications. He was adamant that they were. My next comment did not go over well. “Then why pick them?”

He had no real response except to say, “We need someone doing the work.” I do not understand the thought behind this decision. They are not qualified to lead, yet we put them in that role anyway? What message does that send to the flock? More important, what does our Father and Creator think about our process? We need to understand how God thinks.

Next, I tried to explain that a strict response to the list is more a legalistic one, which is not one that Jesus would condone. Here is my point. Is murder an unforgivable sin? No is the correct answer. Is divorce an unforgivable sin? No is the correct answer. Paul was a big-time sinner, yet God asked him to accept His Son. Paul did. God forgave his sins and asked Paul to join His team. Paul did. He became a leader, an apostle for God’s sake even though he was a sinner. Is this an example we should follow? Let me add a couple more questions. Which is the worse sin, divorce or murder? Does God forgive both, one or the other, or neither? What is the only unforgivable sin?

Paul was deemed a murderer, but once he was forgiven, God sent him to preach to the Gentiles. A man who is divorced and remarried then comes to Christ and is forgiven, right? Okay, yes—but there is a caveat, which is becoming a disciple of Christ because we repent and ask Him for forgiveness of all our sins connected to the divorce. Even after one comes to Christ, is he less qualified to be called by God for any purpose? I think not! God examines our heart and makes his call from a point of view we probably will never fully grasp while we work in this world. We are not qualified to overturn God’s decisions. Think about this carefully. Pray about this even more.

My second comment to the elder about appointing deacons was a little more welcome but not by much. We also need to look at Acts 6:2–3, where we read that they were to be filled with the Spirit. I ask him if he and the elders or pastor thought about confronting these men on these shortcomings. They could set up training for these leaders and those they might identify as future leaders so they could better understand the leaders’ concerns and what God says about the example they are to set for the sheep that God has entrusted to all the leadership.

I asked, “What would Jesus do?” The elder stumbled on his words a bit. Then I interrupted, saying, “If your leadership does not want to mentor these men to a higher spiritually mature place, you need to ask God to drop highly qualified men into your lap or consider your own qualifications, which may not be up to His standard. After all, Jesus set the example by mentoring the apostles for three years, teaching and doing.” At that he walked away, ending our conversation. Did he get my meaning? Did he tell some version of our conversation to the leadership? I do not know.

How can we justify telling anyone that God will never call them to be a leader, deacon, pastor, or counselor or to any other service because they are a sinner? Are we to judge them or to love them? Is our forgiveness or lack thereof greater than God’s (Matthew 7:2–5)? Now if he is married to more than one spouse at the same time or having an affair, then the answer is “You cannot serve as a leader or teacher in Christ’s church at this time. However, you are welcome to come to worship God.” I can see many pastors and Bible scholars, and I do not know who else is seething over this part of the book or even outright angry. It does not matter; read the entire Word of God, not just 1 Timothy 3.

The other caveat is that since you are already assigned a leadership position who has been given authority to fill other positions by your church, you need to know the rulebook. Do you spend time in prayer, as a leadership group and individually, to ask God for guidance on your decisions? I am talking about hours of prayer, not just snippets at the beginning of the meeting and decision process. That is not a suitable sacrifice to God. These verses give us clear guidelines to allow God to show us who should lead in the church, by choosing men who are filled with the Holy Spirit—not just a water baptism but baptized by the Holy Spirit—followed by their having good fruit, then continual attention to prayer and the ministering of the Word (God’s divine expression).

Pastor Dave R. Dremann seeks to awaken the flock of Jesus with this book that highlights the responsibilities of those who are members of his church.

Our heavenly Father needs us armed with His Word and filled with the Holy Spirit ready to defy the devil’s attempts to herd as many of us into hell as possible. Our job, if we choose to accept it, is to study His word, command His word, spread His word, pray His word, and use His word to increase the membership of heaven. He needs us to be obedient soldiers by knowing and doing His will.

Satan is winning the fight of leading us and the lost away from the promises of God. We are believing Satan’s lies and we are not attending to our great commission of spreading the Gospel.

Pastor Dave R. Dremann spent much of his career in executive management. As the companies he worked for became larger and more profitable, he became discouraged because employees were neglected. God called him into ministry in 1991 with Alpha Omega Concepts and Counseling, whose vision was to provide a home and school environment for troubled male teens.