Memoirs of a Believer 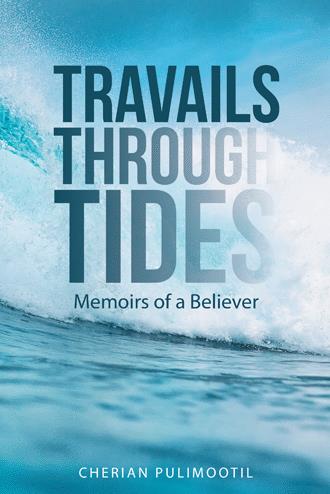 ‘Travails through Tides’ is more than just a book in the sense that the author opens up his heart and mind to narrate his life experiences frankly in a straight-forward manner. His experiences may not be so different from others but he found out that it was neither his effort nor his will power but God’s power and mercy that brought him to achieve his life goals. As such, his story has a unique touch in his overwhelming trust in God, the giver of life, who cares for His people.

In describing his journey, he has included various elements that shaped hm. For example, his family background and church affiliation were important factors for his strong faith from his very early years. He was able to trace his own family roots to an ancient Christian family with its connection to apostolic Christianity. This branch of Christian faith and its development as narrated by him would serve as a concise introduction to the Indian church history.

His study and living experiences in his homeland and abroad include numerous challenges that he faced, especially in the areas of educational systems and the way of life. Though the educational systems differ from country to country, he saw the value of receiving a formal education in an institutional setting which would help develop one’s talents and choose a suitable career. In modern times, culture shock with regard to food, dress, homesickness, etc., may not be problematic but surely it can be felt in the areas of superiority, hostility, norms, and mores. The author points out some of his own experiences, emphasizing the need for discernment, to select, adjust, and adapt with diverse communities in order to foster goodwill and harmony among all.

An interesting part of it has been his travelogue titled “Learning through Traveling” which provides a glimpse of certain famous landmarks in both India and the U.S. In earlier times air travel between these two continents would need about two days. A set of maps and a heavy wallet could enable one to go on a trip to limit the risks involved. But today, with just a twenty-hour air trip one could reach each side of the globe! All the bookings, accommodations, sightseeing trips, etc., could be arranged in advance with the help of a cell phone or a computer and without seeking anybody’s aid! His travel description to Israel will surely serve as a mini-guide for one who looks forward to visiting the Holy Land and its most sacred places. In spite of the political clouds that dim the co-operation between Israelis and Palestinians, the land still brings thousands and thousands of pilgrims from all over the world year after year.

Above all, the author invites the reader to the travails that he had to face throughout his life’s journey and its climax, when he set his eyes to fulfill the final goal in life. This was his desire to serve the church through its ordained ministry motivated by his parents, teachers, and his own religious convictions. What he thought was possible with an academic training in ministry, soon made him aware about the fact that it was only a part of the selection process to priesthood! To fulfill other requirements, he had to overcome heavy currents of problems without sinking. He has fallen down many times, but was soon back on his legs with redoubled energy. His grit, perseverance, resilience, and his complete trust in God gave him the blessing to fulfill his goal at last. It is hard to deny the fact that the hand of God has been with him.

Whatever faith one follows, God has a place in everyone’s life. Placing Him first is the first requisite for a successful life. Even in one’s worst times, faith in God can turn things around, because God is in ultimate control and He can use those worst things to bring good out of them. The constant awareness of God’s presence in his life moves him forward and not back off in despair during such hard times.

Finally, if God is the eternal source for living, how does one reach out to Him? It is through prayer alone. It is not just talking to God, but pouring out one’s soul in truth with a broken and humble heart pleading for mercy, as God delights in the fervent and sincere prayers of a believer. Jesus himself taught his disciples to pray but many people of our time hardly pay any serious attention to a life centered in prayer.

There are more things in this real-life story which are worth reading.

All in all, this work brings a proper perspective about God and man, that everyone is chosen to reveal God’s purpose through his or her life experiences. For some God-talk may be unscientific as they believe there is nothing supernatural. But testimonies like the ones shared in this book should not be underestimated, but rekindle the longing of a human soul for a Supernatural, in order to live a meaningful and purpose-filled life.

What is life all about? It is a serious question asked by many, especially when threatened with uncertainties and personal tragedies. An appropriate answer to such a question is necessary to lead a meaningful and purpose-filled life.

Cherian Pulimootil’s book, the Travails through Tides, tells his personal struggles and times of powerlessness through his life. When he was just about to give up, believing he was destined to his fate, he turned to God for help. With the power of prayer, he is strengthened to tide over his difficulties. He reveals a number of near-death experiences that changed him. It is a captivating story touched by his bountiful spirit of honesty, tenacity, and faith in God.

The book is an easy read and highlights the influence of cultural and religious values in a person’s life. Its few chapters include detailed travel experiences to various landmarks in India, U.S.A., and Israel.

Dr. Cherian has taught high school and university students for a quarter of a century and also served as a priest of the Episcopal Church for over a decade. By giving up a successful career in accountancy to seek a formal theological education, he reached the United States, leaving behind some of the social traditions of his Indian roots. He became a strong voice of equality and justice against caste, gender discrimination, dowry, arranged marriage, poverty, and religious persecution. After serving churches in Virginia and California, he now lives in San Diego with Ann, his wife, and their family.