SAVED!!! What it means to me

Personal stories from “born-again" Christians, about their individual lives, salvation, and the change since they accepted Jesus Christ. 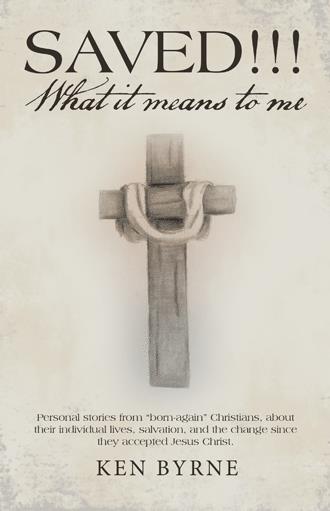 FOREWORD
Some thoughts before you read these stories from people who have experienced the transformation of just living in this world to becoming a different person devoted to the Living God, Jesus Christ.
After I was saved and became a believer, a born-again Christian, my world changed for the better. A couple of years ago, I woke up one morning with one thing on my mind, to try and reach as many people, as possible, with my testimony of salvation.

After thinking about it, I decided to include the stories of other people and share their testimonies.

I sometimes ask people from church, and friends, when they came to know and accept Jesus as their Saviour. Very emotional to hear a person talk about their life stories and the things they went through and then, finally, surrender to God completely.

Somehow, I really think that the Holy Spirit has asked me to write this book to reach people that are curious about “born-again” Christians or followers of Jesus Christ.

Perhaps you will relate to someone’s story and realize how they overcame the trials in their life and then know that no one is in a hopeless situation when you have Jesus Christ waiting to pick you up.
I thought I was in a desperate health situation twelve years ago when even trying to hold the weight of a pencil was difficult. Here I am now typing away trying to reach you and as many people as possible.

Did you ever think to yourself that I am too sinful to be forgiven? Just about everyone on planet Earth has heard the song, “Amazing Grace” that was written by John Newton, an ex-slave trader.

You should Google this man and read his story. Believe me when I say that no person is beyond the acceptance of Jesus Christ.


I was born in 1947 to Catholic parents, George, and Beatrice, and went to a Roman Catholic church and school in Syracuse, New York. I was always curious about the “teachings of the religion”, and I had many questions but was met with the response, “These are things you don’t question”. Yes, I had plenty of questions but no answers. I wanted to know more about Adam and Eve. Who was it that witnessed these events and recorded them? It was a simple thing for a ten-year-old to ask, but I did not find out the answer for another fifty-five years! I went to the Catholic Mass almost every Sunday and was an altar boy while growing up. I was not the most attentive student and well-behaved was not in my vocabulary; maybe that is why the nuns and priests called me Dennis the Menace.

In 1964, I quit high school after my junior year and joined the U.S. Navy for a four-year enlistment. There I received my high school GED and worked in radar electronics.
Our ship had a multitude of different types of religious services, and out of curiosity, I attended each and every one of them to see the difference. I was totally confused now!

Finally, my four-year navy service was complete and I was back in civilian life. I eventually joined a Roman Catholic men’s organization, Knights of Columbus. My highest position obtained was Deputy Grand Knight, fourth degree for the district of South Yarmouth, Massachusetts. I was dubbed “Sir Kenneth” in the organization.

By the year 2007, I had two failed marriages behind me and was now living with a woman out of wedlock. While in Massachusetts, I owned a real estate business on Cape Cod and lived in comfort - money, luxury cars, frequent trips to the casino, and great vacations. I thought I had it all (or did I?).

Then at the age of fifty-nine, my world started falling apart. While driving home from a family reunion in Syracuse, New York, I started getting double vision. Within weeks, I developed muscle weakness and sensitivity to light both outside in the sun and inside the house. Long story short: myasthenia gravis, a neurological disorder, was my enemy.


A year and a half later, the weakness increased and breathing was becoming tough. I was admitted into a Boston hospital and then told that my lungs were filling up with fluid, which the medical staff started draining. I could hardly blow a feather from the palm of my hand.

One night the doctor decided last rites would be in order, so a Catholic priest was summoned. He went through his motions of absolving my sins and preparing me for heaven. Well, the next morning, I was still alive and was lying in the hospital bed with one thing on my mind: IF my sins were forgiven the night before THEN, why didn’t I feel relieved or cleansed? Little did I know it would take another five years for me to get an answer for that! So, the doctors operated and removed my thymus and started me on heavy duty meds and therapy.

For the next year, or so, I lost everything, my real estate business, money, and friends. My weakness was so extreme that just holding a pencil was difficult. Walking was almost impossible without some kind of assistance. It took all the strength I could muster just to put my socks on in the morning. Finally, I came to the point that I could take care of myself. Then I packed my things and moved from Cape Cod to Pennsylvania to be closer to my daughter Amy, her husband and my three grandchildren.

What happened to these people changed their lives forever.

Compelling life stories, or testimonials, from eleven people in different walks of life. You may relate to one of them. Find out what it means to be “born-again” and the impact it can make on you. What happened to these people changed their lives forever.

“I remember begging God to do something because I could not go on like this anymore. I asked Him to either take control of it all or take me home. I don’t know how long I stayed like this. While I was contemplating all this, I suddenly realized a change coming over me. I felt a deep peace and then strength.”
—Jane Byrne

“There is nobody so filthy or so lost that Jesus Christ cannot come and turn your world right-side up. Neither is there anyone so righteous or so good that they do not need Jesus Christ.”
—Jessica

“My time at church turned stale, with the exception of the homily, and I had committed the entire Mass (service) to memory. The most alarming thing to me was that I felt the same exact way before a church service as I did after church. There was no feeling in my faith, only doing and attending church once a week, which simply checking off my duty to God. I believed salvation, or entrance into heaven, was something you could earn or achieve, and I lived with this mentality for 19 years.”
—Monica

Saved!!! What it means to me does not just end with these stories. We want you to experience a relationship with God like we have, so a Plan of Salvation is included at the end, which could be the beginning for you!