THE MAKING OF SIR VANT 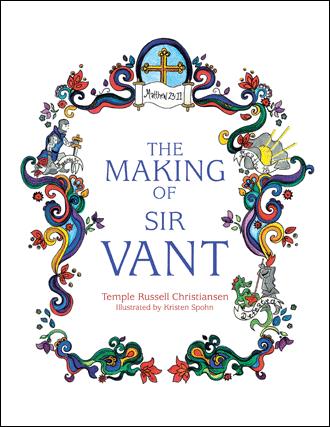 ONCE UPON A TIME in a far off land there lived a boy named Vant. More than anything in the world, he wanted to be a knight. Knights in training were called squires. As a squire, Vant learned through careful instruction and discipline from his father, Lord Adonai, his mother, Lady Gloriana, and other trusted knights and teachers in the kingdom. They taught him all about character - that which was honorable and that which was deplorable; about that which was glorious and that which was ghoulish; about man's sin and his need for redemption; and they taught him all about chivalry, which included the arts of riding one's horse well, fighting, fulfilling one's knightly duties, defending the defenseless, and living by The Knights' Code of Service and Honor: (insert picture #2)

Thou shalt at all times, in all things, and in all places
Be a champion of truth, righteousness, goodness, mercy, and humility,
And with self-control be the sworn foe of hatred, ignorance, injustice, and cruelty, even if you find them in yourself.
Thou shalt be generous and give what you are able
To those who have need; and
Thou shalt always respect and honor your family,
For by them will you be known.

As squires, Vant and the other sons of knights and lords competed in feats of strength, skill and wit designed to prepare them for future knighthood. In their mock fights, Vant was often paired with an arrogant young squire called Vice. Vice often bested Vant at the sword fights, gloating over his victories which bothered Vant, yet also motivated him to work harder developing the skill.
One day as Vant and Vice were challenging one another in one of these sword fights, Vant handily beat his cocky opponent. As he held out his hand for the traditional good sport handshake, Vice sneered at Vant, spit at his feet and turned away.
In a flash, Vant burned with anger. Then he remembered the Knights' Code, especially the part about having self-control. With sweat dripping from his nose, he shrugged his shoulders and turned to go. Suddenly, out of the corner of his eye, he saw Vice moving back toward him, his sword raised up to strike Vant from behind. Vant turned and raised his sword just in time to glance the blow. (insert picture #6)
The two aspiring knights glared at each other nose to nose. Lord Adonai, who was overseeing the fights in the courtyard, came to separate and stand between the boys. He took their swords and reprimanded them both for losing their self-control. Vant thought to himself, "It was Vice who acted wrongly, not me. Vice did not act according to the Code." Then he remembered how the Knights' Code taught about humility as well as respecting and honoring your family. "Yes Father. I will strive to do better," he responded.

“How can a young person stay on the path of purity? By living according to your word.” Psalm 119:9 (NIV)
God’s Word, in the Holy Bible, offers guidance to parents in teaching their children and fulfills a child’s own desire for direction.
“The Making of Sir Vant,” written by a mom inspired by her desire to provide wholesome edifying literature with worthy character examples for her four sons, invites you to snuggle up with your little ones to explore, in a medieval setting, the character expanding experiences of a son of the King, becoming a knight--a boy, becoming a man.
Whimsical illustrations by Palmer, Alaskan artist Kristen Spohn, are full of intentional meaning with their vibrant watercolors and symbols, for which a guide is provided to enhance learning.

Temple Russell Christiansen is a grateful child of God, a wife to a wonderful semi-retired teacher, coach, and husband, a retired homeschool mom of four grown sons, a sports enthusiast, and a dedicated volunteer in her community and church in Palmer, Alaska.