Ode to the Hamster in My Head 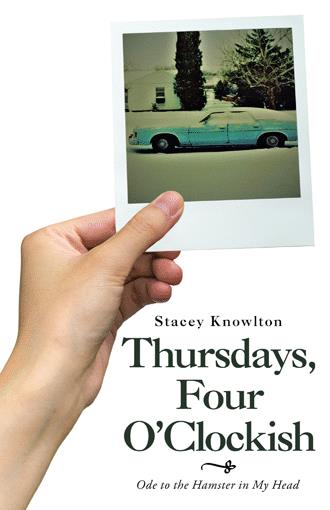 My therapist tells me I have issues and should express myself more. Well, I did that. A bit too much, I’m afraid. The hamster ran on his little wheel faster and faster. He was dressed like a little furry boxer, and he was sweating to the tune of “Eye of the Tiger.”

The new girl in school walked right up to my table in the middle of my lunch and stood there and told me that my boyfriend was now hers. I lost it.

The whole time I was hurting her, I told myself it was wrong to express myself in that fashion. Helen finally pulled me off her, and two of the new girl’s songbird friends came running to drag her away from me. Roxy just went right on with her lunch. Helen had an arm around my middle and a hand over my mouth, trying to catch all the fire that was pouring out onto the new girl.

Helen, my best friend since kindergarten, was the only person who’d been able to get within five feet of me in the last five years without being punched. She was mad at me most of the time. “You’re reckless,” she’d say. “You don’t follow the rules. You take advantage of God’s forgiveness. You like to punch people.”

I would roll my eyes. But she was always right by my side, ready to cover my mouth and hold me back. I knew she was right as much as I knew I was wrong. I was embarrassed to be called out on it. The hamster tripped on his tiny shoestring and fell, spinning round and round and upside down on his little wheel.

My name is Teressa Diane Curtiss. I am seventeen years old, and my therapist says I have issues. “More issues than Life magazine,” he says.

I say that it’s like this: my best friend, my pawpaw, went off and died on me as I was ready to embark on a new adventure called junior high—the worst years of my life!—and as if that weren’t bad enough, my granny decided to follow Pawpaw to heaven just a few months later.

So yeah, I got into fights wherever and whenever I felt the urge to punch, which was often. I could not control myself. Windows got smashed, and about five years ago, I got set up with a therapist to see every Thursday for the rest of my life, typically around four o’clock.

We were all dragged—kicking and screaming in my case—to in-school suspension for the rest of the day and two days following. Even Roxy, Helen, and the songbirds were taken. Roxy was led down the hall with her eyes squinted and mouth twisted, carrying two pimento cheese sandwiches (one was mine) and a bag of Munchos (mine), all for sitting at the wrong table (mine).

We were given three whole days to get to know one another. At first, that was not something any of us wanted. The new girl, Kate, was whining and crying, and her new friends told her, “It’s okay,” “I know she’s mean” (this was whispered), and “She used to be all right.” Helen and I sat in the opposite corner of the room with Roxy, who was sleeping on her desk.

The hamster had to hold my tongue while I sat and listened to the new girl cry. Self-control, Teressa. Self-control.

I had about given up on trying to restrain myself, when out of the corner of my eye, Sleeping Beauty awoke from her slumber and huffed louder than the Big Bad Wolf. Roxy stood up tall, two inches taller than I was, and marched right up to the new girl. Then she turned toward the door with her eyes still half closed, a huff escaped her pursed lips, and she casually slipped out of the room. We didn’t see her for the rest of the day. I was pretty sure she went straight to my car to sleep in the backseat, because that was where I found her that afternoon.

After Roxy left the room, the new girl waltzed over to me. She looked at me with her big green eyes, which were still wet with tears, and said, “I’m sorry.”

“Okay, me too, I guess,” I huffed, crossing my arms and chewing my bottom lip, a bad habit that required strawberry lip balm 24-7.

I did not know if I was really sorry at that point, but I said it, and after that, Kate sat down at the desk next to me and started talking. I had no idea anyone could talk so much. Helen got up and walked across the room to sit with the songbirds, leaving me there to control myself with Kate. I had to listen to her, and by the end of day one, I learned that Kate was Scotch Irish, and her full name was Katrina Angelina Teresa Elizabeth McDuffie. I did not ask for all of that information. She went on and on and on, telling me everything about why she and Patty—whoever that was—had to move to Morgan City. I wasn’t sure, but I thought I heard witness protection in there somewhere.

Teressa Diane Curtiss is seventeen years old, and her therapist thinks she has issues. People say she “used to be all right,” but that was before both her grandparents died within months of each other. Teressa really loses it, though, when the new girl at school walks right up to her lunch table and tells Teressa that she has taken her boyfriend. Teressa has no choice but to punch the girl, right?

Her therapist says she should express herself more. Her best friend Helen says she’s reckless, doesn’t follow the rules, and takes advantage of God’s forgiveness. In response to all this, Teressa makes a decision. She tells her pastor and her therapist that she’s mad at God and waits for lightning to strike.

When she isn’t immediately struck down, something insane happens. God chooses Teressa—the trouble-making, bad-boy-liking, disrespecting, and conflicted girl—to help someone. That someone is the new girl Teressa just punched. Things are about to get really interesting.

Stacey Knowlton is an enthusiastic Christian leader of children and youth. She has also worked with non-profit youth organizations most of her adult life. She is currently a mentor and leader in her church and works with the local Boy Scouts. When not writing, she’s probably clean sweeping a closet, out mowing the grass, or trekking around in the wilderness.