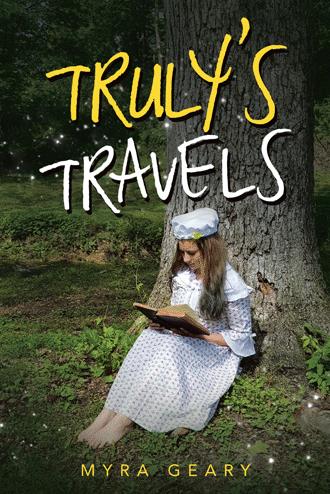 This is the story of a dream of a special young girl named Truly. Truly was an 11-year-old girl and very lovely. One beautiful, fall day Truly was sitting under a tree in the park. Reading her favorite book, she began to feel very sleepy. She immediately fell into a deep sleep and began to dream a dream. Little did she know what was ahead for her in this dream, and how it would change everything. Truly lived with her family and they lived on Sad Street, very near the home where Christiana and Christian lived. Christian and Christiana were a couple who decided to leave the City of Destruction and travel to the Celestial City. ­ The story of this couple and their children was well known by all who lived in the City of Destruction. Christian and his family were invited to go to the Celestial City. And although all their neighbors tried to persuade them not to go, they went anyway. First Christian made his way to his heavenly home, and then later Christiana and her children left for the Celestial City. Truly’s family name was Lost and as I said they lived on Sad Street. Truly was young, but she knew she was sad. She had always been interested in Christian and the journey that he took to the Celestial City. Truly had heard that the Celestial City was the most beautiful place and that everyone who lived there was very happy. She didn’t know if it was true or not, but she wanted to find out. She had asked many questions. And, over time, she found out that the reason that Christian had wanted to leave the City of Destruction, was found in a Book called the Bible. ­ The Book also told where to go and how to get there. But Truly was afraid to read it. She was afraid that her friends would laugh and make fun of her. She was even more afraid of what her family would say if they found out that she was reading it. Her parents would be disappointed, for sure. And her brother, Bravely, would laugh at her. As the days passed by, Truly had such a strong longing to read the Book and to find out if there was a way to be happy.

Truly began to ask around, very carefully, to see if she could get a copy of the Bible. It was not easy. Everyone in the City of Destruction seemed afraid of the Book and no one spoke of it. One day a friend of hers asked if she wanted to come over and look through some of her Aunt’s books that were in her attic. Truly said yes, but tried to hide from her friend how excited she was. Finally, the day came that they had decided to look through the books. Truly’s friend had lots of fun looking through the books and reading some. But Truly was only looking for one thing, a copy of the Bible. She had almost given up as she put back the last box of books on the shelf. ­ Then her eye caught a dusty, old book off by itself. Truly picked it up, dusted it off , and read very clearly on the cover, “Holy Bible.” She almost shouted. She quickly took it over to her friend and asked her about it. “Oh, that’s a book our old neighbor had given to my brother. You can have it if you want. No one here wants it.” Again, Truly almost shouted. But she didn’t. She simply said, “thank you.” Truly took the Book home and hid it in her closet. She read the Book every minute that she had time to. She would hide in her closet to read it or take it with her to the woods where she could be alone. ­ The more she read, the more she wanted to read. She saw how Christian had a burden for his sin, and how he felt that their city was to be destroyed. Truly started to feel this way too, (Holy Bible, Romans 3:23). As time went by, Truly began to change. She seemed sadder, and yet she felt encouraged; that maybe there was hope. Her parents noticed something different about her, but they did not know what made the change. Truly was a beautiful girl with blonde hair and brown eyes. When she smiled, she looked like the sun, so bright and so beautiful. But as she was beginning to have a burden for her sin; a large, ugly, brown, and lumpy thing grew on her back. One day Truly took the Bible with her to the park. She found a quiet spot under a tree where she felt she could be alone and she began to read. On this day she read, “For God so loved the world that He gave His only begotten Son, that whosoever believeth in Him should not perish, but have everlasting life,” (Holy Bible, John 3:16). She was not sure what it all meant. But this must be what made Christian decide to leave the City of Destruction and to go to the Celestial City. She still had questions though. Who was God’s Son, and what did it mean to have everlasting life? What was this ugly burden on her back and how could she get rid of it? At that moment she noticed a man walking up to her. “Hello,” he said. “Hello,” she answered back. She was not afraid of him. He was a kind-looking man. “My name is Evangelist. I’ve come to invite you to the Celestial City.”

Follow along with Truly and her family on this breathtaking journey to the Celestial City. There are trials and pitfalls along the way, but the joy and happiness they find cannot be measured. Claim the enduring lessons you find here for your own, as we see Truly make it home.

Myra Geary lives in northwest Arkansas. She is active in her local church in Gravette. She has two children; a son in Idaho, and a daughter in Arkansas. Truly’s Travels is her first book, which has been in the works for nearly 10 years.