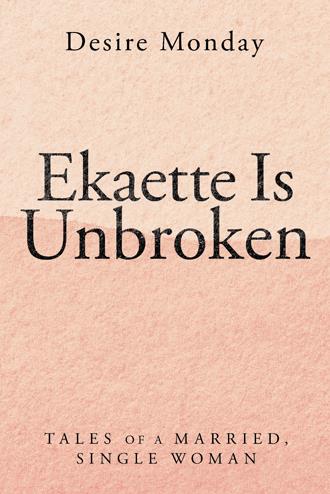 Circumstances forced seventeen-year-old Ekaette’s parents to give her up for marriage at age seventeen to a stranger ten years older who lived in the United States of America. On joining her husband in the United States, she soon realized that she had been tricked to leave behind the only life that she knew, despite it being a life full of misery, pain, and agony. She wept uncontrollably for two months straight, begging to return to her hometown in Nigeria, West Africa. Her husband was anything but loving, caring, and affectionate. She had no money and certainly no one to lean on. She wept, questioning her fate in life.

Stricken by loneliness, the news of her pregnancy was the best thing that ever happened to her. An answered prayer! The baby would give her something to do. Above all, the baby would bring her joy and ease her loneliness. The reaction at the news by her husband, however, was very disappointing. He wanted nothing to do with a pregnant woman or the baby. He arranged to take her to Planned Parenthood and blamed her for not using precautions that would have prevented her from getting pregnant. Terminating her pregnancy could have only happened over her dead body. She adamantly refused a visit to Planned Parenthood. The birth of her baby shined a light on her dark world, and for that she was most grateful.

Eighteen months later, she gave birth to her second daughter. Two babies brought her the much-needed distraction from her pain, an abusive, uncaring husband, and life as it was happening to her. But then life just wouldn’t let down. Two weeks after the birth of her second daughter, she went through a near-death experience. Her survival was nothing short of a miracle and God’s power. She struggled with raising her babies pretty much alone, without any help or family, while dealing with not only emotional pain but excruciating physical pain as well. Attaining independence and financial freedom were key to her survival and rearing her daughters. Her boldness, a gift from God, drove her to apply for and secure one of the best-paid jobs at the time with full benefits. A much-needed breakthrough!

The standard of living for her daughters was on the verge of improvement thanks to the financial breakthrough. She secured a safe apartment in a nice neighborhood and moved there with her family, including her abusive husband. She poured her soul into her marriage, her family, and most of all, her children. But as much as she wanted and fought for a good home for her children, jeopardizing their health in any way was never an option. Four years into the marriage she was forced to move away with her babies. But becoming officially a single mother at the age of twenty-one was not an issue. God prepared her for it. The issue was coping with an abusive husband whose power over her had been taken away. And with that, he resorted to stalking and harassing her every step of the way, a situation that caught the attention of the company that she worked for, the authorities, and the court system. It took several restraining orders, supervised visitations, pain, and anguish to get him off her back and, of course, obtain the final divorce decree.

Ekaette’s life is now somewhat peaceful and less chaotic. She is happy just the way things are going for the first time in a long time. She’s gained a support system, including Lisa, the babysitter, and has now enrolled in college. She attends school during the day and works at night. She is determined to make something out of herself, but mostly to be the best mother to her daughters. But the guilt! The guilt that would haunt her throughout her life. The guilt that she just can’t shake off. The guilt of her children not experiencing the love of an earthly father like she had when she was growing up. The guilt that none of her daughters can get to call themselves a “daddy’s girl.” The guilt that would eventually drove her to her second marriage, which she calls, “twenty years of entrapment and agony.” On a brighter note, the twenty years of entrapment and agony produced two beautiful sons.

The deterioration of her health as a result of stress and hard labor, along with the unforgivable sin, finally made Ekaette draw the line and end the marriage that she never wanted to end. Sadly, those twenty years never really gave her the satisfaction of having a father figure for her children. But her devotion to God made up for it, and Almighty God never let her down.

Being a father, mother, uncle, aunty, cousin, grandma, grandpa, and the sole breadwinner for your children is not a task for the weak. It is not a task that Ekaette would ever wish on her worst enemy. Yet she did it gracefully and beautifully with God on her side. She made sure that her children were raised and trained up in the ways of the Lord. Even though she had to cut short her education to devote time and energy to her children, she made sure that they attained the highest levels of education they desired.

Ekaette, a young woman whose circumstances forced her parents to give her up for marriage at a young age of 17 to a complete stranger who was ten years older than her, and lived in the United States of America. Upon joining her husband in the U.S., She would soon realize that she had been tricked to leave behind the only life that she knew, despite her circumstances to a life full of misery, pain and agony. Nothing that she could ever imagine. She wept uncontrollably for two months straight begging to return back to her Hometown of Nigeria in West Africa. Her husband was everything, but loving, caring and affectionate. She had no money and certainly no one to lean on. She wept, questioning her fate in life. Four years into the marriage, Ekaette’s life of slavery had become unbearable. At age 22, she was a single mother with two children struggling alone in a foreign country. Ekaette eventually remarried and had two more children. Life was good for a while, then took a turn for the ultimate worse with her second husband. She divorced him after what she calls 20 years of entrapment.

Ekaette continues to attract men with similar character traits as she obsesses over being a married woman in order to have a father figure in her children’s lives. The tales of this married, single woman continues as she hurts for herself, and mostly for her children. Did she give up on marriage? And how could she have survived all that she endured and yet remained Unbroken?

Desire Monday is a dynamic result oriented leader, coach and Educator who has worked in the beauty and fashion industry for over 27 years, as owner, Master Stylist, Artistic lead, and now in the corporate setting in Management. Her passion for the industry and her company - Salon by Instyle inside JCPenney gained her a full page campaign slot on the industry’s leading magazine - Modern Salon Magazine. Desire Monday is a skilled entrepreneur, image consultant and a fashion blogger who believes that projecting a winning image shouldn’t have to cost a fortune. Her life long passion is to inspire, empower and motivate people.

Desire Monday is a proud mother of four amazing adult children; two Ladies and two Gentlemen. She builds her world around them. Her trials and tribulations have caused her to become a fierce, and a bold spiritual being who is not afraid to speak the truth with love and compassion. She has a burning desire to tell the world about the faithfulness of God. Her struggles, trials and tribulations drew her closer to God and made her that much stronger, and the light within her can never be dimmed. She is Unbroken.